According to Transwestern's Third-Quarter 2017 Office Market Report, after decades of stagnation, asking rents for office space in New Jersey are steadily rising and nearing an all-time high.

During the past two years, rents have increased by 9 percent - the largest two-year increase since 2001. Furthermore, the market's current average asking rent of $26.86 is the second-highest quarterly average of all time, nearing the high that was recorded more than 16 years ago.

"The concept of 'service' has taken on greater importance over the past couple of years," said James Postell, Transwestern Partner and City Leader. "There's been a significant increase in leasing activity among companies in the service sector industries, and tenants have become much more inclined to renew or relocate to properties based on landlord and management services."

Rents in New Jersey have increased in eight of the past nine quarters, and 16 of the 21 submarkets examined by Transwestern have experienced year-over-year rent increases, including seven submarkets with rents that are more than $1 higher than a year ago. The Hudson Waterfront, Newark/Urban Essex, Short Hills/Millburn and Woodbridge/Metro Park submarkets have experienced the greatest increases.

"The long-running perception of the historically unchanging nature of office rents in New Jersey is no longer salient," said Matthew Dolly, Transwestern's New Jersey Research Director. "As the market has evolved, it seems like every recent office building acquisition in the state is a value-add play where extensive renovations are planned. Significant property upgrades are accompanied by higher asking rents."

The pace of leasing slowed during the third quarter with fewer large transactions completed - no new leases were signed for greater than 100,000 square feet, drawing concerns of consolidation. Among the top 12 largest leases signed during the quarter, 10 were new deals, with leasing strongest among companies in the personal services, legal services, business services and financial services companies.

The State of New Jersey continues to focus on incentives to bolster business growth and retention, as evidenced by three third-quarter deals:


Additional highlights of the report include: 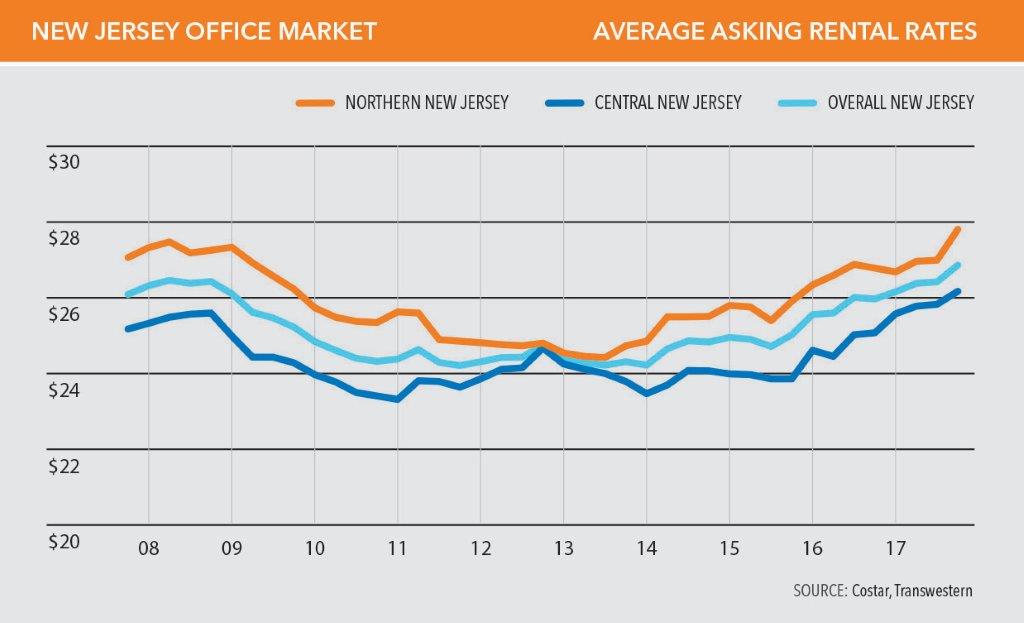