According to Transwestern Commercial Services' First-Quarter 2019 Office Market Report, as the slow but steady resurgence of the New Jersey office market continues, vacancy has reached its lowest level in nearly a decade. After decreasing by one-tenth of a percentage point for the third straight quarter, the vacancy rate sits at 14.7%.

Office vacancy was buoyed during the first quarter of the year by strong absorption: 12 of the state's 21 submarkets reported positive absorption, marking the fourth consecutive quarter in which the state recorded positive net absorption as a whole - a feat that hadn't been achieved since 2014.

Although approximately 75 percent of leases signed throughout the state were for less than 25,000 square feet, with business service companies driving the bulk of leasing activity, nearly half of the 21 submarkets recorded more than 100,000 square feet of leasing. Biotechnology company Celularity's 147,215-square-foot lease at 170 Park Ave. in Florham Park represented the quarter's largest lease, and the only one exceeding 100,000 square feet.

"Due to high prices in walkable downtowns, millennials are expanding their geographical parameters for living preferences to areas just outside downtowns, which can only help suburban business, and consequently, the suburban office market," said Jim Postell, TCS Partner and City Leader. "The Celularity lease, where we're proud to have been the leasing agent for property ownership, is the latest example of a suburban office building gaining successful lease-up following substantial capital improvements." 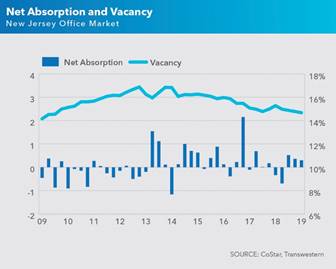 Despite receding slightly during the first quarter, asking rents are still trending upward in New Jersey. Year-over-year rents have increased by 2%, and they are up 8.9% over the past five years. Furthermore, the current average of $26.86 per square foot is the fourth-highest on record for the state. Year-over-year rents in five submarkets - Bergen East, Edison South, Meadowlands, Parsippany Region, and Wayne/Paterson - have increased by more than 5% each.

"Rents are increasing in buildings that are being upgraded, in part due to increased demand, but also because owners need to recover higher construction costs," said Matthew Dolly, TCS New Jersey Research Director. "Simultaneously, with the business sector prospering, tenants are increasingly competing to attract the best talent by seeking the most desirable workplace amenities: connectivity and convenience."