The California Association of Realtors reported this week that heated market conditions and a shortage of homes for sale continued to put upward pressure on home prices in California, driving the state's median price above the $800,000 benchmark for the first time ever in April 2021, as home sales soared from last year's pandemic-level lows.

Closed escrow sales of existing, single-family detached homes in California totaled a seasonally adjusted annualized rate of 458,170 in April, reports C.A.R. The statewide annualized sales figure represents what would be the total number of homes sold during 2021 if sales maintained the April pace throughout the year. It is adjusted to account for seasonal factors that typically influence home sales.

April home sales increased on a monthly basis for the third consecutive month, rising 2.6 percent from 446,410 in March 2021 and up 65.1 percent from a year ago, when 277,440 homes were sold on an annualized basis. The sharp yearly sales jump was expected as the housing market was hit hard by the pandemic shutdown last year, when home sales dropped more than 30 percent over the previous April.

"California continues to experience one of the hottest housing markets as homes sell at the fastest pace ever, with the share of homes sold above asking price, the price per square foot and the sales-to-list price all at record highs, while active listings remain at historic lows," said C.A.R. President Dave Walsh.

"The high demand and shortage of homes for sale, driven by these market factors, continued to drive up home prices and shatter the record-high set just last month."

California's median home price broke last month's record and set another new record high in April as the statewide median price surged more than 34 percent from a year ago. The statewide median home price climbed 7.2 percent on a month-to-month basis to $813,980 in April, up from March's $758,990 and up 34.2 percent from the $606,410 recorded last April. The year-over-year price gain was the highest ever recorded, and it was the first time since June 2013 that the state recorded an annual increase of over 30 percent.

"Not only do skyrocketing home prices threaten already-low homeownership levels and make it harder for those who don't already have a home to purchase one, it also brings to question the sustainability of this market cycle," said C.A.R. Vice President and Chief Economist Jordan Levine. "As vaccination rates increase and the state reopens fully, higher home prices will hopefully entice prospective sellers who have held off putting their homes on the market during the pandemic to feel more comfortable listing their homes for sale, which would alleviate pressure on home prices." 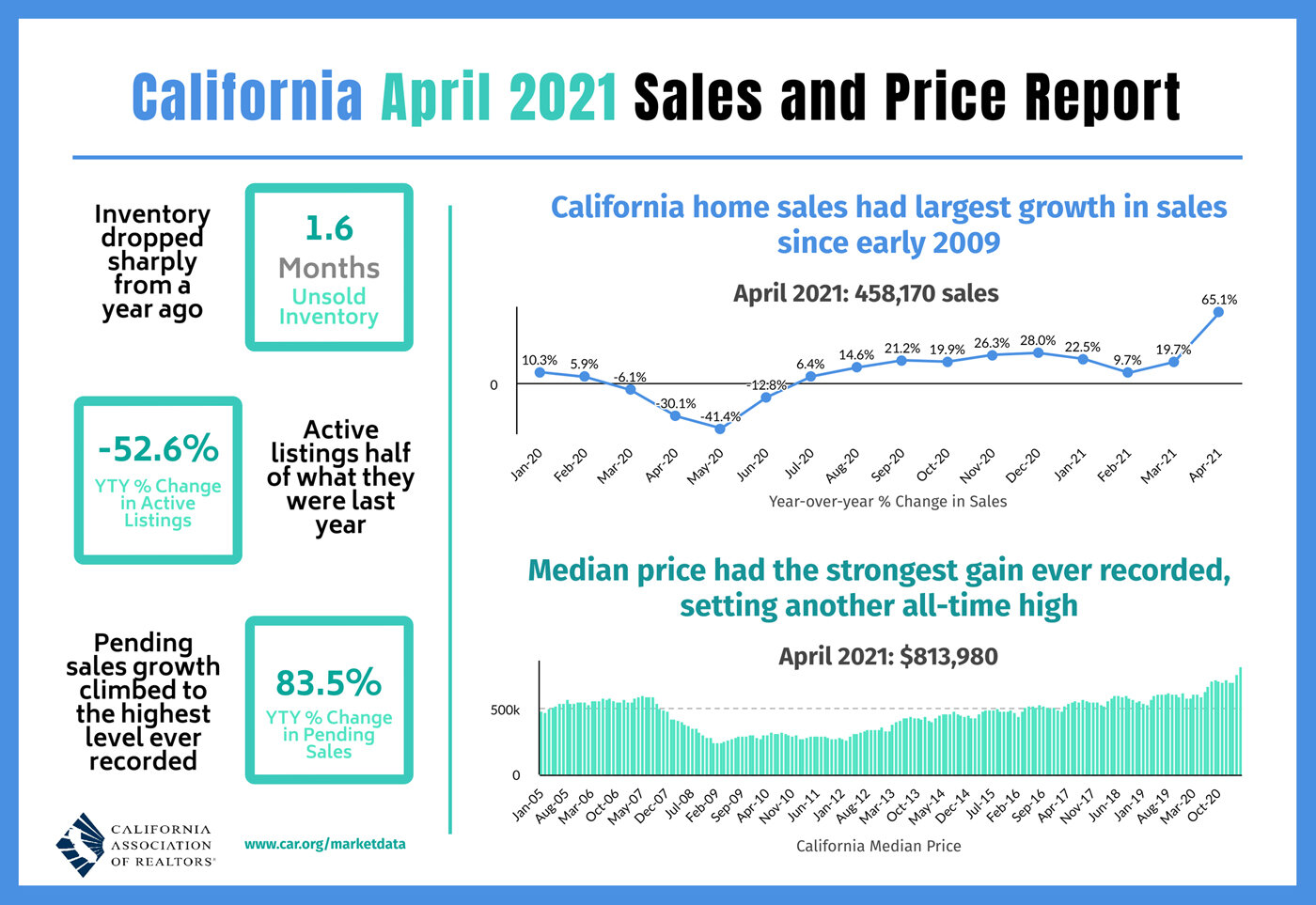