According to the Greater Las Vegas Association of Realtors, local Las Vegas home sales continued to rise while home prices started to level off in August 2017.

"Basically, our local home prices have been going up by about 10 percent per year for the past three years," Tina said. "That rate of appreciation has been fairly consistent, making for a stable housing market. At the same time, more homes are changing hands as the economy improves."

As for potential headwinds in the local housing market, Tina said the demand for housing continues to exceed supply. At the current sales pace, he said Southern Nevada still has less than a two-month supply of existing homes available for sale. A six-month supply is considered to be a balanced market. He added that the supply is even tighter for lower-priced homes, condos and townhomes.

By the end of August, GLVAR reported 5,157 single-family homes listed for sale without any sort of offer. That's down 32.1 percent from one year ago. For condos and townhomes, the 683 properties listed without offers in August represented a 45.1 percent drop from one year ago. If there's a bright spot in the housing supply, Tina explained, it's that "at least we had more homes available for sale in August than we did the previous month."

According to GLVAR, total sales so far in 2017 continue to outpace 2016, when 41,720 total properties were sold in Southern Nevada. At this rate, GLVAR statistics show that 2017 is on pace to be the best year for local home sales since at least 2012.

GLVAR said 25.8 percent of all local properties sold in August were purchased with cash, the same percentage as August of last year. That's well short of the February 2013 peak of 59.5 percent.

In recent years, GLVAR has been reporting fewer distressed sales and more traditional home sales, where lenders are not controlling the transaction. That trend continued in August, when 3.7 percent of all local sales were short sales - which occur when lenders allow borrowers to sell a home for less than what they owe on the mortgage. That's down from 4.1 percent of all sales in August 2016. Another 2.4 percent of all August sales were bank-owned, down from 5.5 percent one year ago.

These GLVAR statistics include activity through the end of August 2017. GLVAR distributes statistics each month based on data collected through its MLS, which does not necessarily account for newly constructed homes sold by local builders or homes for sale by owners.

According to the Mortgage Bankers Association's latest Commercial/Multifamily Mortgage Debt Outstanding quarterly report, the level of commercial/multifamily mortgage debt outstanding rose by $43.6 billion (1.2 percent) in the second quarter of 2020.

Forsyth County, Georgia, ranks as the top "Work from Home" county in the United States. Two Colorado counties - Douglas and Broomfield - appear in the top 10 at second and ninth, respectively. 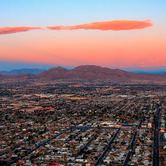 The Las Vegas Realtor Association is reporting this week that local home prices setting another all-time record despite the coronavirus pandemic, though fewer homes sold in August than during the same time last year.