U.S. Housing Markets with Steep Price Increases During Covid Most Susceptible to Housing Downturns in a Recession

Based on new research from national property broker Redfin, popular migration destinations where home prices soared during the pandemic are most likely to see the effects of a housing downturn amplified and home prices decline year over year if the economy goes into a recession. Redfin also found that relatively affordable northern metros are most resilient in the event of a recession.

The U.S. housing market also slowed considerably in the spring, with 5.5%-plus mortgage rates sending many buyers to the sidelines and cooling competition, said Redfin.

"Recession fears are escalating, mostly because the Fed has signaled it will continue to raise interest rates to tame inflation and cool consumer demand. Higher interest rates led to surging mortgage rates, which have already cooled down the housing market," said Redfin Senior Economist Sheharyar Bokhari. "If the U.S. does enter a recession, we're unlikely to see a housing-market crash like in the Great Recession because the factors affecting the economy are different: Most homeowners have a fair amount of home equity and not much debt and unemployment is low."

"But a recession-or even a continued economic downturn that doesn't reach recession levels-would impact some local housing markets more than others, and there are a few factors that put certain areas at risk," Bokhari continued. "First, what goes up must come down. Home prices soared at an unsustainable rate in many pandemic homebuying hotspots. Additionally, places where people tend to have high debt compared with their income and home equity are vulnerable because their residents are more likely to foreclose or sell at a loss."

Even in the most vulnerable parts of the country, most homeowners are likely to remain on solid footing, Bokhari said. Home values may drop from the peak they reached in 2021 and early 2022, but the decline is only on paper for homeowners who are staying put for at least a few years, as values typically increase over time.

Riverside, CA has the highest chance of seeing its housing market cool further if the U.S. enters a recession. It has an overall risk score of 84, the highest of any major U.S. metro. That means a combination of housing and economic data indicate it's more likely than other metros to see prices decline year over year during a recession or continued economic downturn. Riverside, which spans from eastern suburbs of Los Angeles like San Bernardino and Ontario through the Palm Springs area, has highly volatile home prices and it was a hot destination during the pandemic, both for people permanently relocating and those buying second homes.

Like Riverside, many of those housing markets are popular migration destinations and/or places with rapidly rising home prices, both factors that are major contributors to their risk of suffering from a housing downturn. Additionally, Boise, Cape Coral, North Port, Las Vegas, Sacramento and Phoenix were all among the 20 fastest-cooling markets as of May, when mortgage rates approached 5.5%. That's an indicator that prices are more likely to drop in many of those metros as the economy continues to contract.

Six of the 10 areas most at risk of downturns are among the most popular destinations for Redfin.com users moving from one metro to another. Maricopa County (Phoenix) and Riverside County gained more residents from other parts of the U.S. than anywhere else in 2021, according to the U.S. Census.

The most at-risk metros have also experienced outsized price growth. North Port, where home prices increased 30.5% year over year in May, has the nation's fastest-growing prices, followed by Tampa (28.1%) and Las Vegas (26.8%). All in all, nine of the 10 most at-risk areas have faster-growing home prices than the national median (Sacramento is the exception, but home prices there did rise more than 40% during the pandemic, reaching $610,000 in May 2022).

"Boise's market is already turning around, as a lot of the people who moved to Idaho during the pandemic are either moving back to their hometowns or cashing in and moving to more affordable places. The housing market was hot during the pandemic, largely because of out-of-town buyers," said Boise Redfin agent Shauna Pendleton. "Sellers are asking me if the cash buyers from California are still around, hoping they'll swoop in and offer to buy their home for more than the asking price-but that's not happening much anymore, and the cash buyers who are in the market are often offering below the asking price. I don't expect home values to plummet, but we do need to come down from the clouds at some point and sellers need to adjust their expectations to the new reality: There are more homes on the market, fewer buyers, and a higher chance that buyers can't pay the asking price because their monthly payments have shot up due to rising rates."

"But buyers have more to choose from, less likelihood of entering a bidding war and more time to make major financial decisions," Pendleton continued. "Even if higher rates mean buyers need to look at less expensive homes, they're still likely to get a better deal than a year ago because homes aren't being bid up way over the asking price. And if home prices do decline, more people will be able to afford homes in places where they may have been priced out at the height of the buying frenzy."

Akron, OH has the lowest chance of a housing downturn if the U.S. enters a recession. It has an overall risk score of 29.6, the lowest of any major U.S. metro. Some factors that make Akron relatively resilient are low home-price volatility, low debt-to-income ratio, relatively few second homes and the fact that homes there are unlikely to be flipped.

Akron is followed by Philadelphia, with an overall risk score of 30.4, Montgomery County, PA (31.4), El Paso, TX (32.2) and Cleveland (32.4). Cincinnati (32.6), Boston (32.6), Buffalo, NY (33.1), Kansas City, MO (33.4) and Rochester, NY (34) round out the top 10. Nearly all of those metros are affordable with relatively slow-increasing prices, both factors that would help their housing markets in the face of a recession. Prices rose slower than the national median in nine of the 10 most resilient metros (El Paso is the exception).

Seven of the 10 metros least at risk of a housing downturn had a median sale price lower than $300,000 in May, and in nine of them it's lower than the national median of $431,000. Affordability helps housing markets in a recession because it means people are more likely to be able to buy homes, and those places may attract people from out of town looking for lower prices. 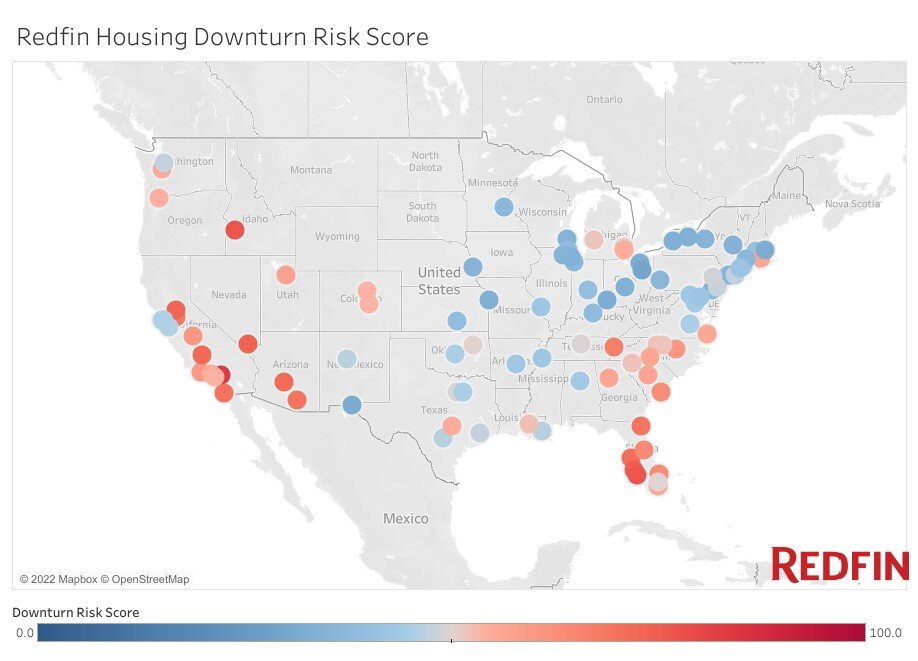