According to the California Association of Realtors, rising wages and slightly lower interest rates did little to improve California's housing affordability, which remained flat compared to the previous second quarter of 2016.

The percentage of home buyers who could afford to purchase a median-priced, existing single-family home in California in third-quarter 2016 remained at 31 percent, unchanged from the second quarter of 2016 but was up from 29 percent in third-quarter 2015, according to C.A.R.'s Traditional Housing Affordability Index (HAI). This is the 14th consecutive quarter that the index has been below 40 percent and is near the mid-2008 low level of 29 percent. California's housing affordability index hit a peak of 56 percent in the second quarter of 2012.

C.A.R.'s HAI measures the percentage of all households that can afford to purchase a median-priced, single-family home in California. C.A.R. also reports affordability indices for regions and select counties within the state. The Index is considered the most fundamental measure of housing well-being for homebuyers in the state.

Home buyers needed to earn a minimum annual income of $100,290 to qualify for the purchase of a $515,940 statewide median-priced, existing single-family home in the third quarter of 2016.  The monthly payment, including taxes and insurance on a 30-year, fixed-rate loan, would be $2,510, assuming a 20 percent down payment and an effective composite interest rate of 3.76 percent. The effective composite interest rate in second-quarter 2016 was 3.85 percent and4.15 percent in the third quarter of 2015.

The affordability of condominiums and townhomes also were flat compare to the previous quarter. Forty percent of California households earned the minimum income to qualify for the purchase of a $418,230 median-priced condominium or townhome in the third quarter of 2016, and an annual income of $81,290 was required to make monthly payments of $2,030.

Key points from the third-quarter 2016 Housing Affordability report include: 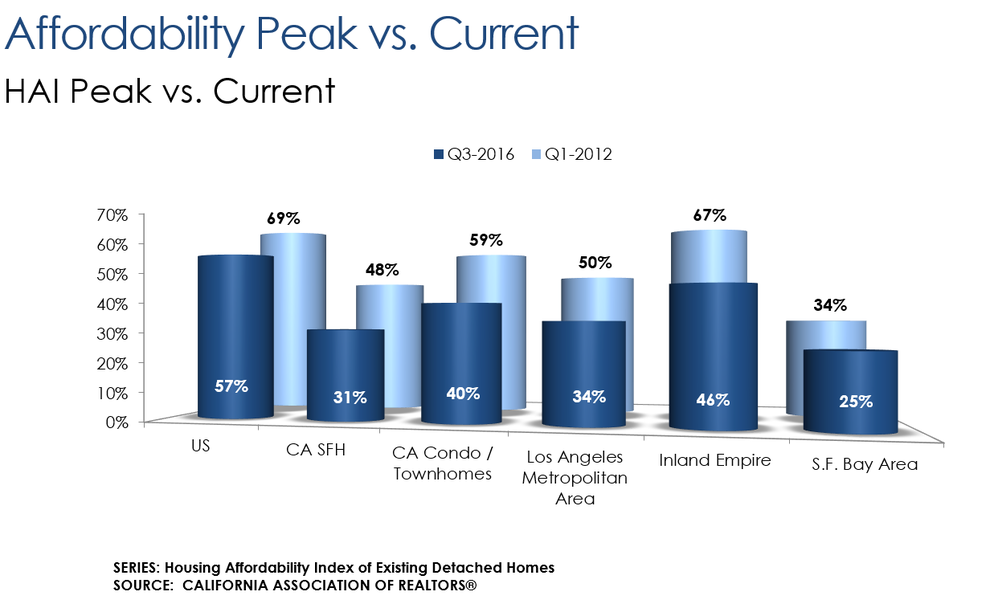