According to the California Association of Realtors (C.A.R.) newly released 2015 California Housing Market Forecast, home price increases in the golden state are expected to stall in 2015.

C.A.R. says that because of more available homes on the market for sale, California's housing market will see fewer investors and a return to traditional home buyers as home sales rise modestly, causing home prices flatten out in 2015. 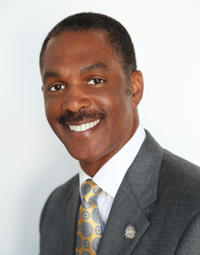 "Stringent underwriting guidelines and double-digit home price increases over the past two years have significantly impacted housing affordability in California, forcing some buyers to delay their home purchase," said C.A.R. President Kevin Brown.  "However, next year, home price gains will slow, allowing would-be buyers who have been saving for a down payment to be in a better financial position to make a home purchase."

"Moreover, prospective buyers should know that it's a misperception that a 20 percent down payment is always required to buy a home.  There are numerous programs available that allow consumers to buy a home with less down payment, including FHA loans, which lets buyers put down as little as 3.5 percent," continued Brown.

The average for 30-year fixed mortgage interest rates will rise only slightly to 4.5 percent but will still remain at historically low levels. 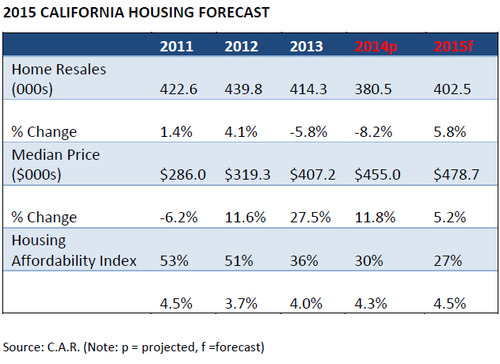 "With the U.S. economy expected to grow more robustly than it has in the past five years and housing inventory continuing to improve, California housing sales and prices will see a modest upward trend in 2015," said C.A.R. Vice President and Chief Economist Leslie Appleton-Young. "While the Fed will likely end its quantitative easing program by the end of this year, it has had minimal impact on interest rates, which should only inch up slightly and remain low throughout 2015.  This should help moderate the decline in housing affordability we saw occur over the past two years."

"Additionally, the state will continue to see a bifurcated market, with the San Francisco Bay Area outperforming other regions, thanks to a more vigorous job market and tighter housing supply."