According to the California Association of Realtors, California existing home sales fell from the previous year in April 2016 as tight housing inventory continues to impede the housing market. April marked the second worst start to a spring home-buying season since the housing recovery began in 2009.

Closed escrow sales of existing, single-family detached homes in California totaled a seasonally adjusted annualized rate of 406,800 units in April, according to information collected by C.A.R. The statewide sales figure represents what would be the total number of homes sold during 2016 if sales maintained the April pace throughout the year.  It is adjusted to account for seasonal factors that typically influence home sales.

The April figure was down 2.6 percent from the revised 417,580 level in March and down 5.4 percent compared with home sales in April 2015 of a revised 430,030. The year-to-year decline was the first in five months and the largest sales drop since August 2014.

An imbalance between supply and demand pushed the median price of an existing, single-family detached California home 5.3 percent higher in April to $509,100 from $483,280 in March. April's median price was 5.1 percent higher than the revised $484,370 recorded in April 2015. The median sales price is the point at which half of homes sold for more and half sold for less; it is influenced by the types of homes selling as well as a general change in values. April marked the first time in nine years that the median price has risen above the $500,000 level; it is still below the pre-recession peak of $594,530 reached in May 2007.

"Thin housing supplies were the driving force behind April's sales drop with the most inventory constrained markets feeling the largest declines," said C.A.R. Vice President and Chief Economist Leslie Appleton-Young. "In the San Francisco Bay Area, sales were down in eight of the region's nine counties, with only Napa - which had a five-month supply of homes for sale - posting a modest 1 percent gain. As home buyers continue to move inland to find affordable housing, inventory will eventually be depleted, putting upward pressure on home prices."

Other key points from C.A.R.'s April 2016 resale housing report include: 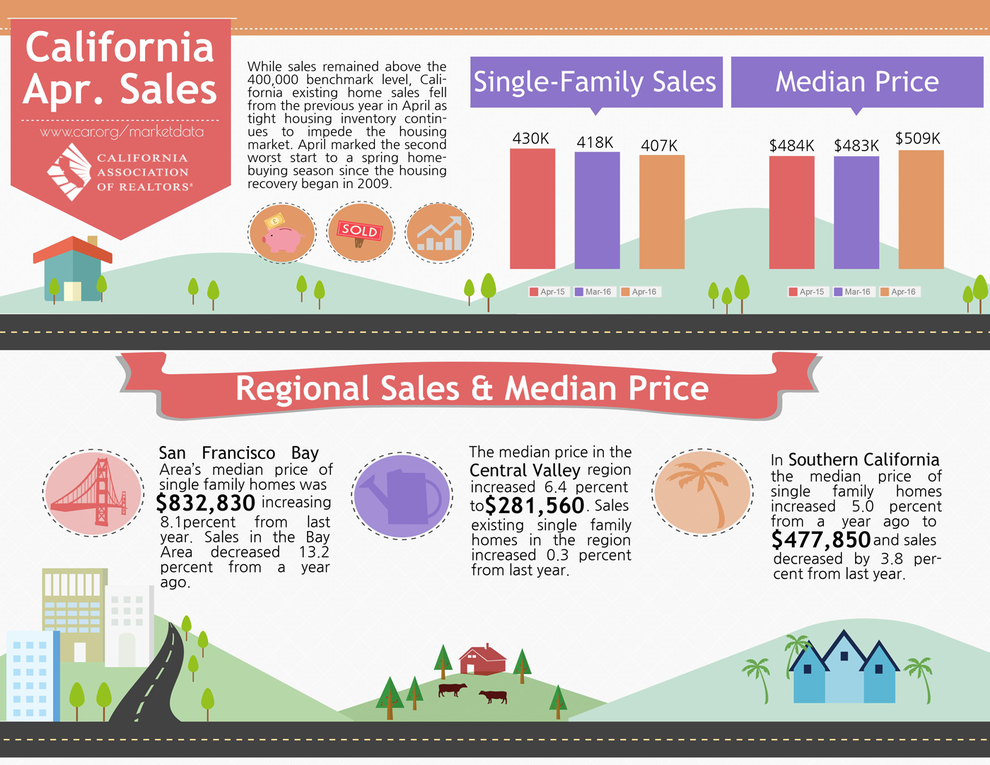