After Slow Start in 2015, California Housing Bounces Back


The California Association of Realtors reports this week that slowing home price appreciation and improving inventory combined to boost California's housing market in February as existing home sales and median home prices increased from both the previous month and year.

Closed escrow sales of existing, single-family detached homes in California totaled a seasonally adjusted annualized rate of 368,160 units in February 2015, according to C.A.R. Sales in February were up 4.7 percent from a revised 351,480 in January and up 2.4 percent from a revised 359,600 in February 2014.  The year-over-year increase was the largest observed since December 2012. The statewide sales figure represents what would be the total number of homes sold during 2015 if sales maintained the February pace throughout the year.  It is adjusted to account for seasonal factors that typically influence home sales.

"While February's statewide improvement in the housing market was moderate, it's an encouraging sign, nevertheless, as we head into the spring home-buying season," said C.A.R. President Chris Kutzkey.  "On the supply side, housing inventory improved overall with active listings growing at a faster pace of 5.3 percent when compared to last February.  Regionally, both active listings in Southern California and Central Valley increased moderately from last year, while housing supply declined 10 percent in the Bay Area."

The median price of an existing, single-family detached California home was essentially flat from January's median price, inching up from $426,660 in January to $428,970 in February. February's median price was 5.5 percent higher than the revised $406,460 recorded in February 2014.  While the statewide median home price is higher than a year ago, the rate of increase has narrowed significantly since early 2014. The median sales price is the point at which half of homes sold for more and half sold for less; it is influenced by the types of homes selling as well as a general change in values.

"The California housing market regained some traction in February as sales activity improved on a year-over-year basis for the second time in three months," said C.A.R. Vice President and Chief Economist Leslie Appleton-Young.  "At the state level, the market is moving in the right direction as the growth of sales continues its upward trend and home prices start stabilizing.  At the regional level, however, the San Francisco Bay Area continued to be hampered by constrained inventory and low housing affordability."

Other key facts from C.A.R.'s February 2015 resale housing report include: 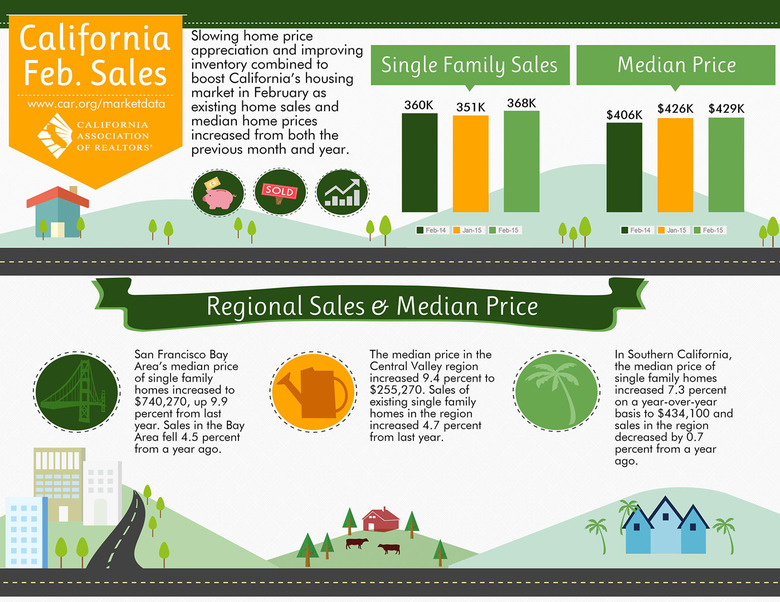