According to the California Association of Realtors, moderating home price appreciation and improving housing inventory combined to spur California's housing market in February 2016 as existing home sales increased from both the previous month and year.

Closed escrow sales of existing, single-family detached homes in California totaled a seasonally adjusted annualized rate of 393,360 units in February, according to information collected by California Realtors. The statewide sales figure represents what would be the total number of homes sold during 2016 if sales maintained the February pace throughout the year.  It is adjusted to account for seasonal factors that typically influence home sales.

"While it's encouraging that home sales were higher from both the previous month and year, it's important to remember that sales were unusually low in the first quarter of 2015, when the housing market got off to a slow start," said C.A.R. President Pat "Ziggy" Zicarelli. "Market activity continues to be dampened by low housing inventory as baby boomers stay in their homes longer and new home construction, while improving, falls below needed supplies."

After accelerating for five straight months, the median price of an existing, single-family detached California home fell 4.7 percent in February to $446,460 from $468,330 in January. February's median price was 3.8 percent higher than the revised $429,930 recorded in February 2015. The median sales price is the point at which half of homes sold for more and half sold for less; it is influenced by the types of homes selling as well as a general change in values.

"February's home price increase was the slowest rate of growth in six months, reflecting a shift in sales toward lower-priced, inland areas as buyers feeling the affordability crunch and tight supplies move away from urban cores to find affordable housing," said C.A.R. Vice President and Chief Economist Leslie Appleton-Young. "Home buyers in the Bay Area are seeking to buy in Contra Costa, Solano, or Sonoma counties, rather than San Francisco, and Southern California home buyers are moving inland to Riverside, San Bernardino, or Central Valley areas, where housing inventory is more abundant and affordable."

Other key points from C.A.R.'s February 2016 resale housing report include: 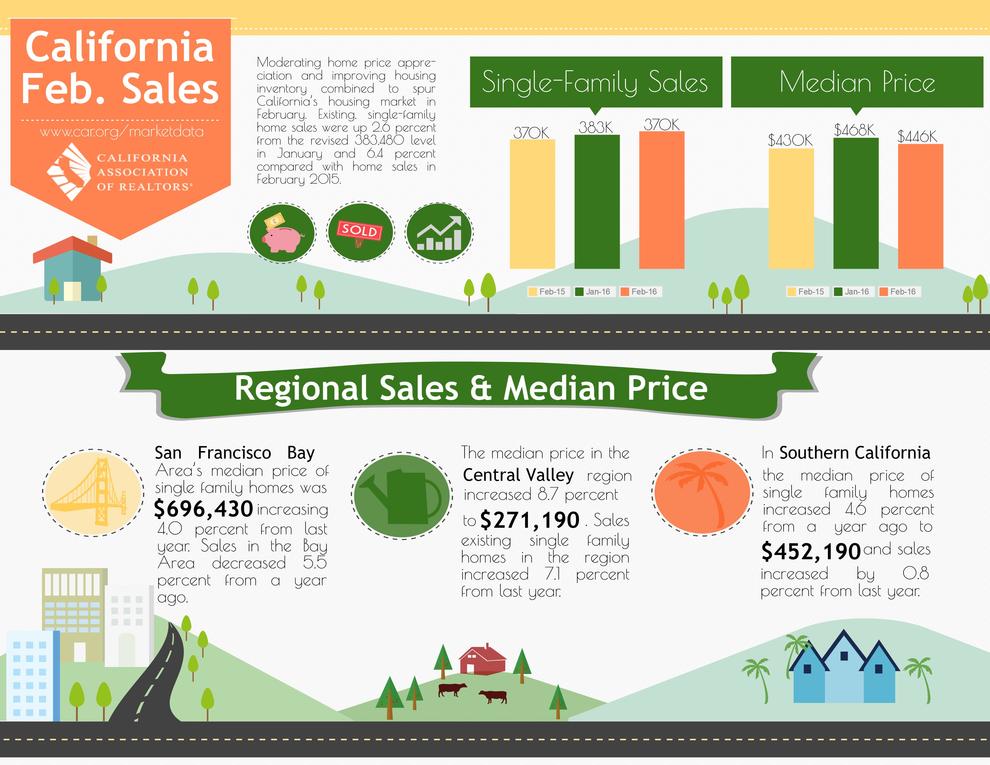