According to the California Association of Realtor (C.A.R.), California's regional housing markets ended the year with mixed results as statewide home sales inched up from a year ago for the first time in nearly 18 months.

Closed escrow sales of existing, single-family detached homes in California totaled a seasonally adjusted annualized rate of 366,000 units in December, according to information collected by C.A.R.  Sales in December were down 2.9 percent from a revised 376,890 in November but up a slight 0.6 percent from a revised 363,740 in December 2013.  The negligible year-to-year increase was the first since July 2013.  The statewide sales figure represents what would be the total number of homes sold during 2014 if sales maintained the December pace throughout the year.  It is adjusted to account for seasonal factors that typically influence home sales.

"Home sales were down on a statewide basis, with pockets of gains in sales activity, especially in Southern California and the Central Valley, where home sales were higher than the prior month and year," said 2015 C.A.R. President Chris Kutzkey.  "Not so for the San Francisco Bay Area, which saw run-ups in sales and prices throughout the year.  This market has tempered from its earlier frenzied pace mostly due to extremely tight inventory."

Reversing a three-month decline, the median price of an existing, single-family detached California home increased 1.7 percent from November's median price of $444,830 to $452,570 in December and was up 3.1 percent from the revised $438,790 recorded in December 2013.  The statewide median home price has been higher on a year-over-year basis for more than two years, but price gains have narrowed over the past few months. The median sales price is the point at which half of homes sold for more and half sold for less; it is influenced by the types of homes selling as well as a general change in values.

"2014 saw a return to a near normal housing market, with sales moving at a moderate pace and home price appreciation growing at more sustainable levels," said C.A.R. Vice President and Chief Economist Leslie Appleton-Young.  "Home prices have stabilized over the past year, which is positive news for buyers who have been putting off their home search until prices leveled off.  And with recent news of an improvement in the job market and the lowest interest rates in a year and a half, buyers may be resuming their home search."

Other key facts from C.A.R.'s December 2014 resale housing report include: 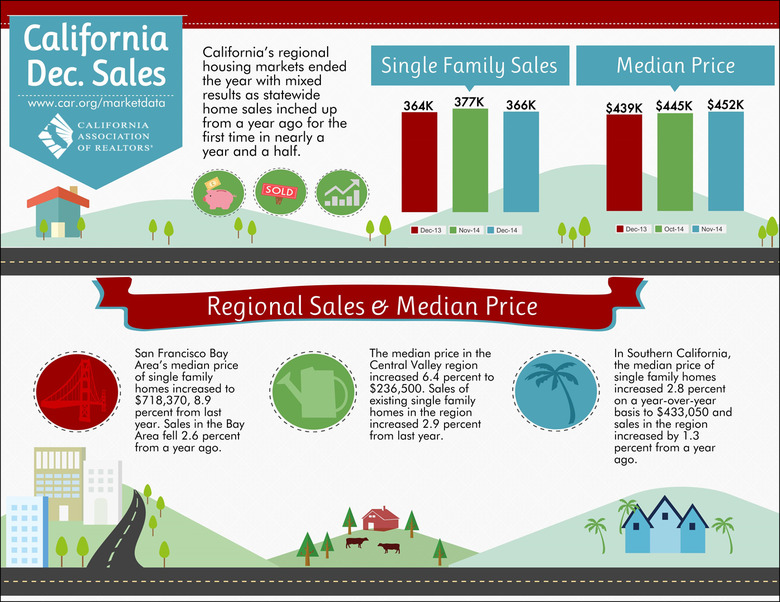