Home sales remained above the 400,000 mark in July for the fourth consecutive month and rose to highest level since October 2012. Closed escrow sales of existing, single-family detached homes in California totaled a seasonally adjusted annualized rate of 449,530 units in July, according to information collected by C.A.R. The statewide sales figure represents what would be the total number of homes sold during 2015 if sales maintained the July pace throughout the year.  It is adjusted to account for seasonal factors that typically influence home sales.

"While July home sales rose at the statewide level, the market is still constrained by low housing affordability and a tight supply in areas where job growth is robust, such as San Francisco and San Jose," said C.A.R. President Chris Kutzkey. "Neighboring regions such as Napa, Solano, and Sonoma are experiencing strong sales due to their affordability and proximity to job centers. However, housing affordability could become a bigger issue in these areas if housing demand continues to grow but supply can't keep pace."

The median price of an existing, single-family detached California home dipped 0.3 percent in July to $488,260 from $489,640 in June.  July's median price was 5.4 percent higher than the revised $463,330 recorded in July 2014. The median sales price is the point at which half of homes sold for more and half sold for less; it is influenced by the types of homes selling as well as a general change in values.

"Home price appreciation has been moderating since the second half of 2013," said C.A.R. Vice President and Chief Economist Leslie Appleton-Young. "The recent monthly dip in the statewide median price, however, reflects the ongoing differential in sales between the coastal and inland regions. The Central Valley has been experiencing sales growth in the double-digits over the last three months, while Bay Area home sales have grown half that rate during the same time frame. As a result, more lower-priced properties have sold in recent months, and this change in the mix of sales is keeping the increases in the statewide median price subdued."

Other key points from C.A.R.'s July 2015 resale housing report include: 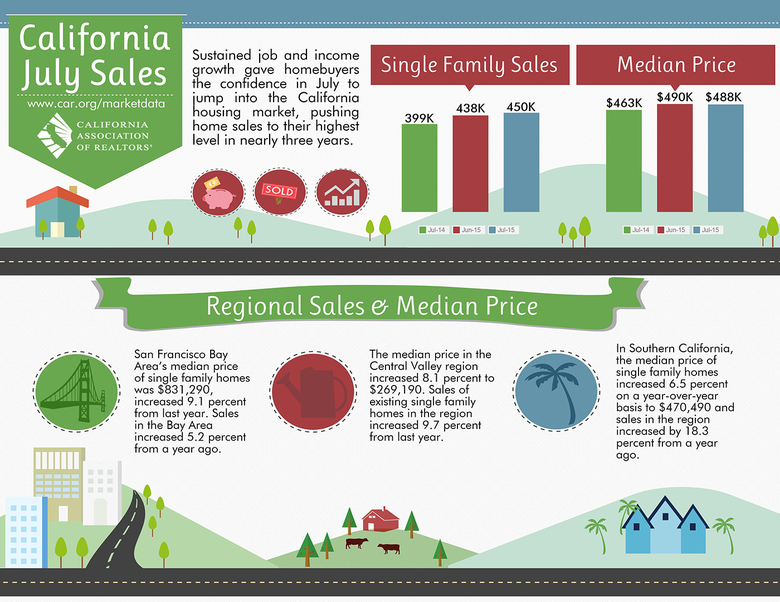