According to the California Association of Realtors (C.A.R.), slower price gains and the lowest interest rates in nearly two years did little to spur November 2014 home sales as low housing affordability and tight supply conditions remained obstacles to entering the market for would-be buyers.

Sales in November were down 5.3 percent from a revised 397,400 in October and down 3.4 percent from a revised 389,580 in November 2013.  Home sales have been below the 400,000 level since November 2013. The statewide sales figure represents what would be the total number of homes sold during 2014 if sales maintained the November pace throughout the year.  It is adjusted to account for seasonal factors that typically influence home sales.

"The declining sales-to-list price ratio suggests that mismatched expectations of home prices between sellers and buyers still exist in most markets, except for the Bay Area, where there's a dearth of homes for sale," said 2015 C.A.R. President Chris Kutzkey.  "Prospective buyers facing affordability constraints recognize the slowing housing market and are looking for deals, while many sellers are still reluctant to adjust their listing prices to reflect the moderation of price gains in recent months."

The median price of an existing, single-family detached California home slipped 1.1 percent from October's median price of $450,270 to $445,280 in November but was up 5.2 percent from the revised $423,090 recorded in November 2013.  The statewide median home price has been higher on a year-over-year basis for more than two years, but price gains have narrowed over the past few months. The median sales price is the point at which half of homes sold for more and half sold for less; it is influenced by the types of homes selling as well as a general change in values.

"Despite a highly favorable interest rate environment, the housing market is being hindered by low housing affordability and a lack of homes for sale, especially in highly desired geographic areas," said C.A.R. Vice President and Chief Economist Leslie Appleton-Young.

"The San Francisco Bay Area, which has an extreme housing supply shortage due to robust economic growth, is a perfect example of how these factors have slowed down home sales this year."

Other key facts from C.A.R.'s November 2014 resale housing report include: 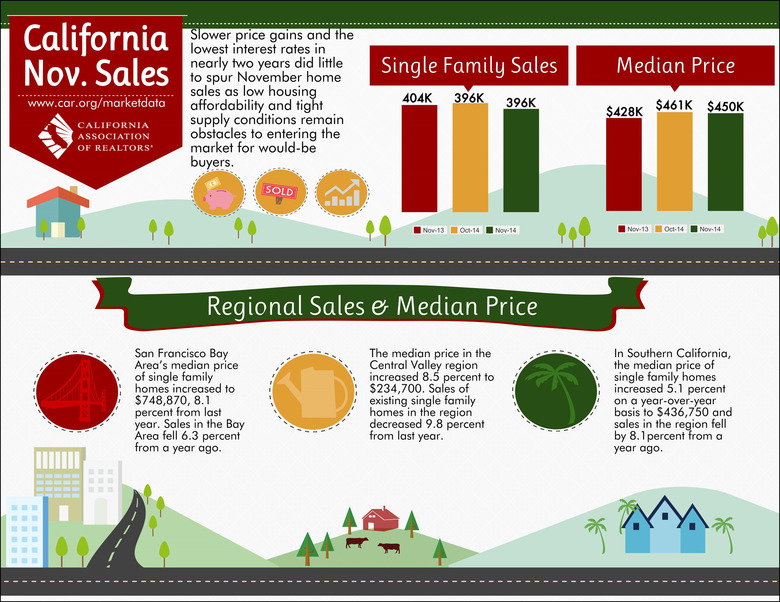