Multifamily is Most Attractive Property Type for Investment Ahead of Industrial

According to CBRE's newly released Americas Investor Intentions Survey 2016, the majority of real estate investors in the Americas intend to increase their property acquisitions in 2016, with Los Angeles as the top target market ahead of New York City and Dallas/Ft. Worth.

The 2016 survey results reveal that investment sentiment regarding commercial real estate purchasing activity remains positive, even in a more uncertain economic and capital markets environment. The survey reveals  65 percent of investors intend to be net buyers--up from 60 percent in 2015--with the vast majority (81%) intending to maintain or increase their purchasing activity in 2016.

Los Angeles ranked as the top metro for property investment this year, edging out New York City in second position. All other U.S. "gateway" markets ranked high among investors. The preferred "non-gateway" markets for investors include Dallas/Ft. Worth, Atlanta, Seattle and Denver. Toronto (5th) is the top ranking non-U.S. market.

"We expect investment in U.S. real estate will increase in the year ahead, driven by the relative strength and stability of the U.S. economy and good property fundamentals," said Brian McAuliffe, President, Institutional Properties, Capital Markets, CBRE.

"Multifamily, office and industrial will continue to be the products of preference; however we anticipate more capital will pivot in the year ahead towards retail than compared to 2015. Core and top-tier value-add will be best positioned to maintain high pricing and low yields, while second-tier assets and markets will feel some downward pricing pressure."

Among the five different investment types--core, secondary, value-add, opportunistic and distressed--value-add remains the preferred strategy (40%). The preference for value-add declined in the 2016 survey, while the preference for core (second highest) rose, indicating some reversion to a more conservative strategy. Similarly, investors' risk for secondary (non-core) assets edged down.

Multifamily (28%) is the most attractive property type to investors in 2016, replacing the industrial sector, which was last year's favorite. Office (24%) and industrial (23%) came in almost tied for second. Retail (17%) still lags behind the other sectors, but this percentage reflects a slight strengthening in preference from 2015.

Weak domestic economic performance (27%) is considered the number one threat to the property markets in the Americas in 2016--approximately the same as in the 2015 survey. Weakness in the global economy (25%), particularly as related to China, is perceived as the second largest threat to Americas' property markets in 2016. 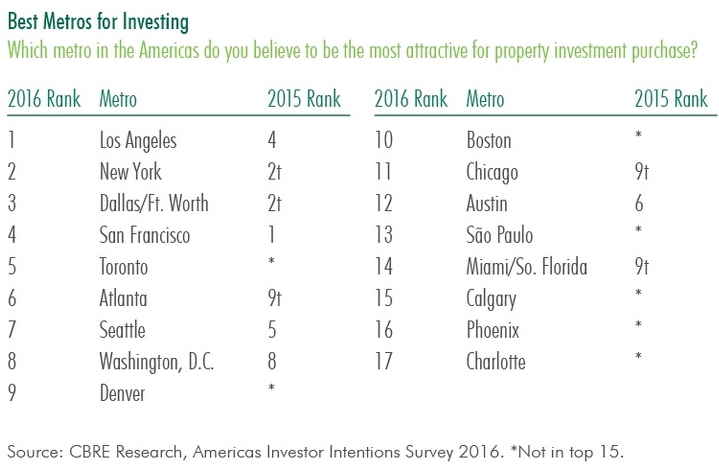