U.S. capital markets remained favorable to borrowers in Q3 of 2016, despite some concerns at the beginning of the quarter regarding the direction of the global economy following Britain's late-June vote to exit the EU. Instead, U.S. capital markets benefited from their perception as a safe haven, as investors moved into Treasuries and other debt instruments.

The CBRE Lending Momentum Index, which tracks the pace of U.S. commercial loan closings, increased modestly by 4.3 percent in Q3 2016. The gains reflect a gradual recovery in loan closings that has taken shape since March, when the Index reached a low of 182. While the Index is down from the year prior, the positive lending momentum over the past quarter is encouraging, especially when viewed against capital markets uncertainty and the direction of U.S. interest rates.
Life companies witnessed a surge in volume during Q3--wresting the top spot from banks among non-agency commercial/multifamily lenders--accounting for 35 percent of lending volume in the quarter and increasing from 20 percent in Q2 2016.

After two strong quarters, bank lending cooled in Q3, accounting for 31 percent of lending volume tracked by CBRE. This represents a modest decrease from the 40 percent-plus market shares banks have captured over the past several quarters, partly due to pressure by regulators to tighten underwriting standards, especially for construction and multifamily loans.

"Despite some issues, the capital markets environment has been supportive to real estate lending in recent months. Most capital sources have been expanding, despite signs that banks are becoming more conservative in their underwriting. Now that the election is over, investors are likely to focus on the Federal Reserve's December policy meeting. It appears that markets are anticipating a greater likelihood of a short-term rate increase," said Brian Stoffers, Global President, Debt & Structured Finance, CBRE Capital Markets.

CMBS conduit lenders were more competitive in the third quarter due to improved price quotes, accounting for approximately 15 percent of loan closings tracked by CBRE--up from 10 percent in Q2 2016.

REITS, private lenders, pension funds and finance companies, maintained a fairly consistent source of capital over the past several quarters. In Q3, this category accounted for 20 percent of deal volume, close to the share recorded in both Q2 and a year ago. This category of non-bank lenders is taking on an increasingly important role in construction, value-add and mezzanine finance, filling in for banks that are facing capital constraints. 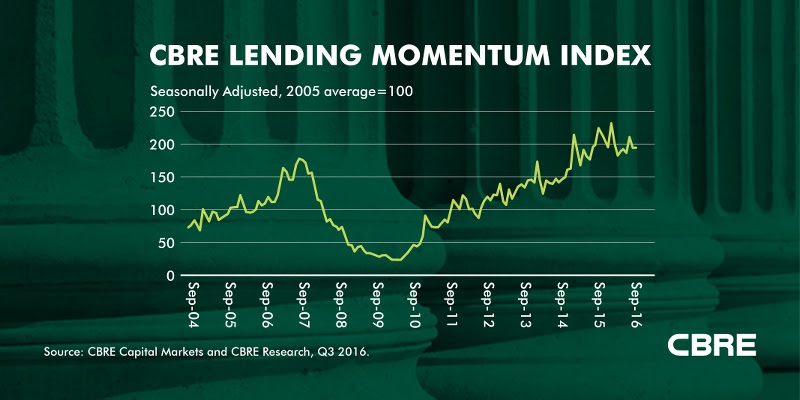 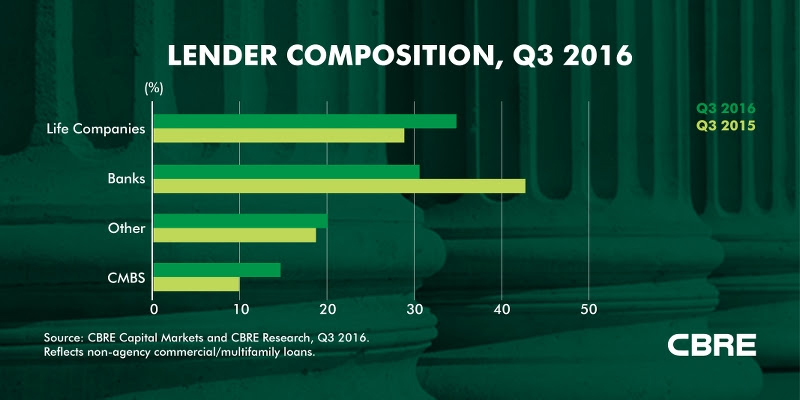