According to research from CBRE, investment in U.S. multifamily reached $127 billion for the year ending Q2 2015 - the highest four-quarter total in history and growth of 36% over the 12-month period. The total surpasses the mid-2000s peak of $100 billion achieved in the year ending Q2 2006.

Investment in multifamily communities has been robust for several years and this trend continued during Q2 2015, with $30 billion flowing into the sector. The quarter's total reflects a 35% gain over Q2 2014, although a slight decline from Q1 2015 (-3%). Multifamily acquisitions represented 27% of the total $110 billion invested in U.S. commercial real estate in Q2 2015.

Cross-border investment in U.S. multifamily totaled $2.1 billion in Q2 2015 (not counting properties acquired through entity-level acquisitions). The H1 2015 total of $4.4 billion is already higher than the full-year 2014 figure of $3.7 billion. Mexico represented the largest country source of cross-border acquisition capital for multifamily investment (31%), due to a significant portfolio transaction, ahead of Canada (29%). 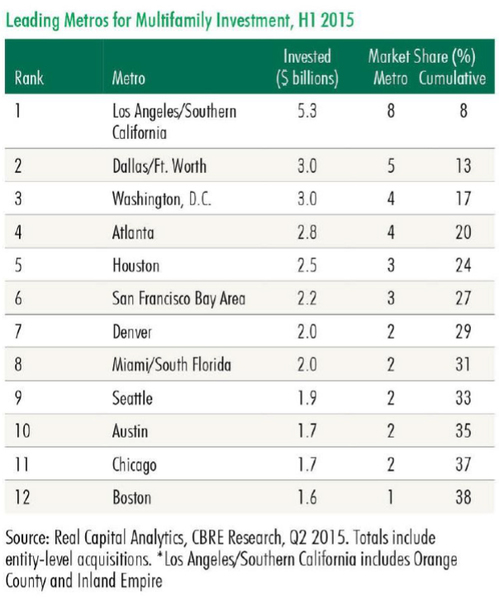 Demand for apartments is unrelenting as new supply has been swiftly absorbed. As a result, the average apartment rent across major U.S. markets is increasing at a pace far above the inflation rate, and the vacancy rate is at its lowest point in nearly 15 years.