According to the National Association of Realtors, existing-home sales in the U.S. ascended in October 2016 for the second straight month and eclipsed June's cyclical sales peak to become the highest annualized pace in nearly a decade. All major regions saw monthly and annual sales increases in October.

Total existing-home sales, which are completed transactions that include single-family homes, townhomes, condominiums and co-ops, grew 2.0 percent to a seasonally adjusted annual rate of 5.60 million in October from an upwardly revised 5.49 million in September. October's sales pace is 5.9 percent above a year ago (5.29 million) and surpasses June's pace (5.57 million) as the highest since February 2007 (5.79 million).

Lawrence Yun, NAR chief economist, says the wave of sales activity the last two months represents a convincing autumn revival for the housing market. "October's strong sales gain was widespread throughout the country and can be attributed to the release of the unrealized pent-up demand that held back many would-be buyers over the summer because of tight supply," he said. "Buyers are having more success lately despite low inventory and prices that continue to swiftly rise above incomes."

Added Yun, "The good news is that the tightening labor market is beginning to push up wages and the economy has lately shown signs of greater expansion. These two factors and low mortgage rates have kept buyer interest at an elevated level so far this fall."

Total housing inventory at the end of October declined 0.5 percent to 2.02 million existing homes available for sale, and is now 4.3 percent lower than a year ago (2.11 million) and has fallen year-over-year for 17 straight months. Unsold inventory is at a 4.3-month supply at the current sales pace, which is down from 4.4 months in September.

"The ramp-up in housing starts in October is a hopeful sign that overall supply can steadily increase enough to provide more choices for buyers and also moderate price growth," said Yun. "A prolonged continuation of the robust single-family starts pace seen last month (869,000) would go a long way in giving homeowners much-needed assurance that they can list their home for sale and find a new home to buy within a reasonable timeframe."

"As a result of the anticipated economic stimulus in early 2017, mortgage rates post-election have now surged to around 4 percent as investors expect a strengthening economy and higher inflation," said Yun. "In the short-term, some prospective buyers may rush to lock in their rate and buy now, while others - especially those in higher-priced markets - may be forced to delay as a larger monthly payment outstretches their budget."

First-time buyers were 33 percent of sales in October, which is down from 34 percent in September but up from and 31 percent a year ago. NAR's 2016 Profile of Home Buyers and Sellers - released last month - revealed that the annual share of first-time buyers was 35 percent (32 percent in 2015), which is the highest since 2013 (38 percent).

"To alleviate the cost for borrowers and better reflect the current risk in the marketplace, Realtors encourage FHA to reduce mortgage insurance premiums and consider eliminating 'life of loan' mortgage insurance," he said. "These two moves would help the current homeownership rate recover from its near all-time low and give more prospective first-time buyers a more affordable financing option."

Single-family home sales increased 2.3 percent to a seasonally adjusted annual rate of 4.99 million in October from 4.88 million in September, and are now 6.6 percent above the 4.68 million pace a year ago. The median existing single-family home price was $233,700 in October, up 5.9 percent from October 2015.

Existing condominium and co-op sales were at a seasonally adjusted annual rate of 610,000 units in October (unchanged from September and a year ago). The median existing condo price was $220,300 in October, which is 6.2 percent above a year ago. 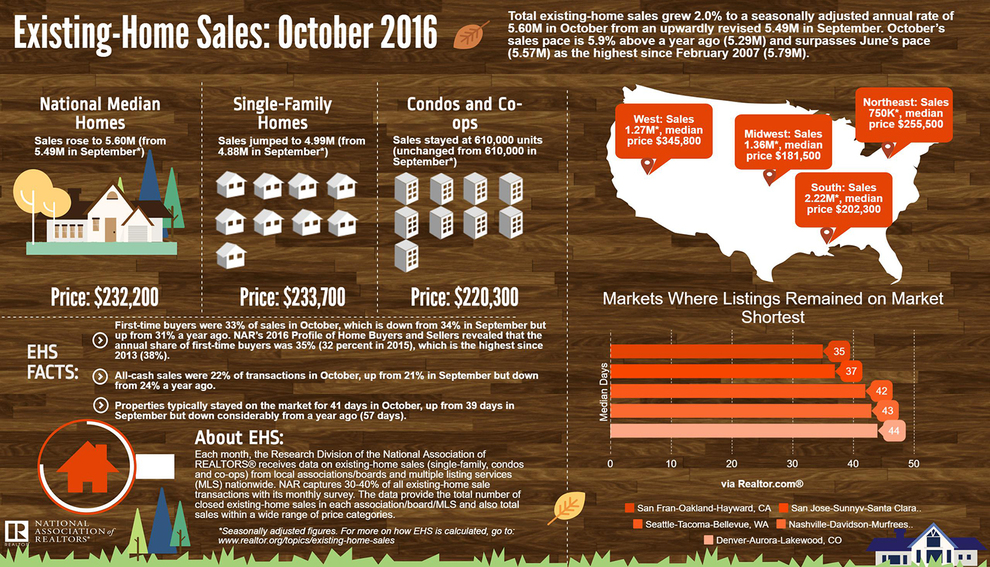