C.A.R. reports closed escrow sales of existing, single-family detached homes in California totaled a seasonally adjusted annualized rate of 305,680 in September 2022. The statewide annualized sales figure represents what would be the total number of homes sold during 2022 if sales maintained the September pace throughout the year. It is adjusted to account for seasonal factors that typically influence home sales. September's sales pace was down 2.5 percent on a monthly basis from 313,540 in August 2022, and down 30.2 percent from a year ago, when 438,190 homes were sold on an annualized basis.

Home sales have dipped for 15 straight months on a year-over-year basis, and it was the second time in the last three months that sales dropped more than 30 percent from the year-ago level. The monthly 2.5 percent sales decrease was worse than the long-run average of 0 percent change recorded between August and September in the past 43 years. Sales in all price segments continued to drop by 25 percent or more year-over-year, with the sub-$300k price range falling the most at 36.7 percent. Sales of million-dollar homes fell by double-digits again for the fourth consecutive month, with the high-end market segment dipping 25.6 percent from the same month last year.

The statewide median home price continued to increase on a year-over-year basis in September, but the growth rate remained very mild compared to those observed earlier this year. At an increase of 1.6 percent year-over-year, September marked the fourth consecutive month with a single-digit annual increase. The less-than-2-percent growth rate in the statewide median price was much lower than the 6-month average growth rate of 6.7 percent recorded between March 2022 and August 2022. The -2.1 percent month-to-month decline in September was slightly lower than the long-run average of -1.8 percent recorded between August and September in the past 43 years. With mortgage rates rising and the average 30-year FRM approaching 7 percent in the past week, home prices will drop further in the coming months as affordability remains a challenge.

"September's sales and price declines reaffirm our forecast for next year," said C.A.R. Vice President and Chief Economist Jordan Levine. "High inflationary pressures will keep mortgage rates elevated, which will reduce homebuyers' purchasing power and depress housing affordability in the upcoming year. With borrowing costs remaining high in the next 12 months, a pull-back in sales and a downward adjustment in home prices are expected in 2023."

Other key points from C.A.R.'s September 2022 resale housing report include: 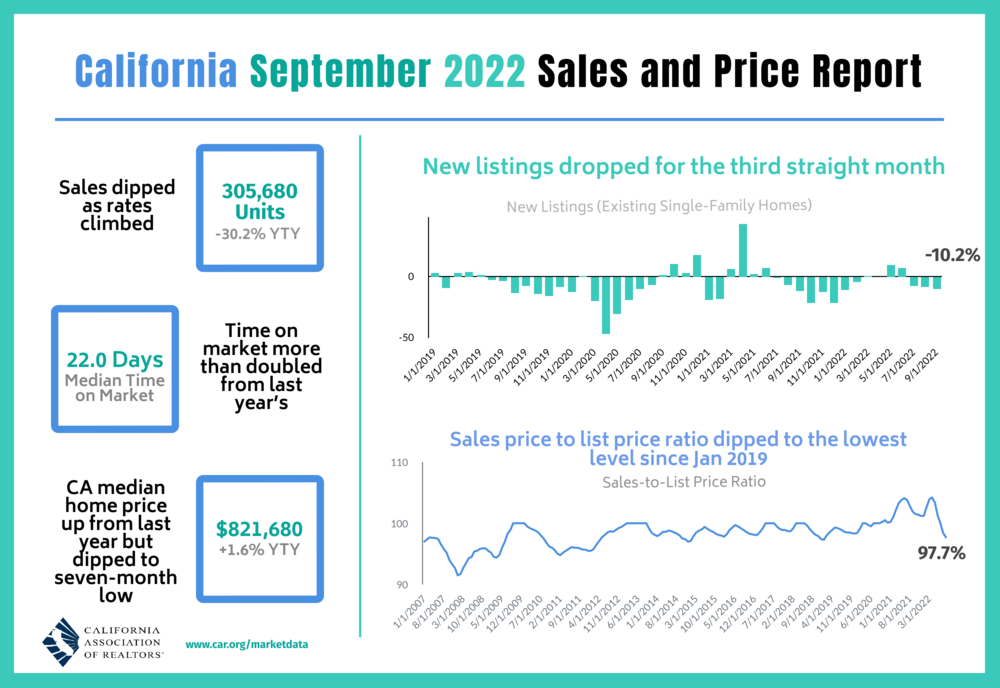