Equal in Market Value to the World's 2 Largest Annual GDPs, US and China Combined
According to new research by Zillow, the total value of every home in the U.S. is $33.6 trillion, nearly as much as the GDP of the two largest global economies combined -- the U.S. ($20.5 trillion) and China ($13.6 trillion).

Since 2010, when the market was battling to regain its footing in the wake of one of the largest housing downturns on record, the national housing market added $11.3 trillion in value -- a more than 50% increase. About 14% of that gain was from new stock entering the market, with the remainder from increased values of the existing stock, underlining just how much home values rose during last decade's recovery and then explosion.

California lives up to its Golden State nickname, making up a whopping 21.2% of the nation's housing value with 12% of the population. To put that into context, the next most populous state, Texas, makes up 8.8% of the U.S. population, but only 5.9% of the country's housing value. To exceed the $7.1 trillion worth of homes in California, you'd need to combine the next four states on the list -- New York ($2.7 trillion), Florida ($2 trillion), Texas ($2 trillion) and Washington ($1.1 trillion).

With $66 billion each, North Dakota and Wyoming have the smallest shares of the U.S. housing market.

At a more local level, three metros are beyond the trillion-dollar barrier -- New York ($3.2 trillion) Los Angeles ($2.5 trillion) and San Francisco ($1.6 trillion). Los Angeles was the only market to add more than a trillion dollars of housing during the 2010s, adding $1.1 trillion. Three of the five metros that gained the most value were in California, as San Francisco ($827 billion), New York ($657 billion), San Jose ($360 billion) and Seattle ($356 billion) followed Los Angeles at the top.

While California cast the biggest shadow in the nation's housing growth for most of the decade, more recent trends paint a different picture. The typical home value in California was growing at more than 20% annually for a period between the end of 2013 and early 2014, an incredibly rapid pace, but one that is also unsustainable. By the end of the decade, annual appreciation in California had slowed to less than 2%, allowing Texas to surpass it as the top contributor to the growth in value of the U.S. housing stock -- total housing in Texas grew $89 billion over 2019, compared to $77 billion in California.

"In 2010, Americans were grappling with falling home values, unsold subdivisions, and sky-high foreclosure rates, while policymakers were working to stimulate demand," said Zillow Economist Jeff Tucker. "A decade later, we're facing a very different set of challenges, as a persistent shortage of new homes and starter homes has kept home prices rising out of reach for many would-be first-time home buyers. More and more of the nation's wealth is now tied up in our homes, as workers in some of the world's most economically productive cities, such as San Francisco, San Jose and Seattle, have raced to get a foothold in homeownership there, driving up prices with their fierce competition. Most of this growth has come from rising prices for the same homes, not from actually building more homes, a troubling trend when it comes to affordability."

In the vast majority of the country, home value appreciation accounted for most of the growth in the total value of the housing stock last decade, including 86% of the growth nationally. However, two fast-growing markets, Charlotte and Austin, saw a greater share of growth come from new homes. That's not to say that home value growth was slow in these markets -- home values have outpaced the national average in both Charlotte and Austin since 2010 -- but the rate of new construction has been so great as to exceed that growth. 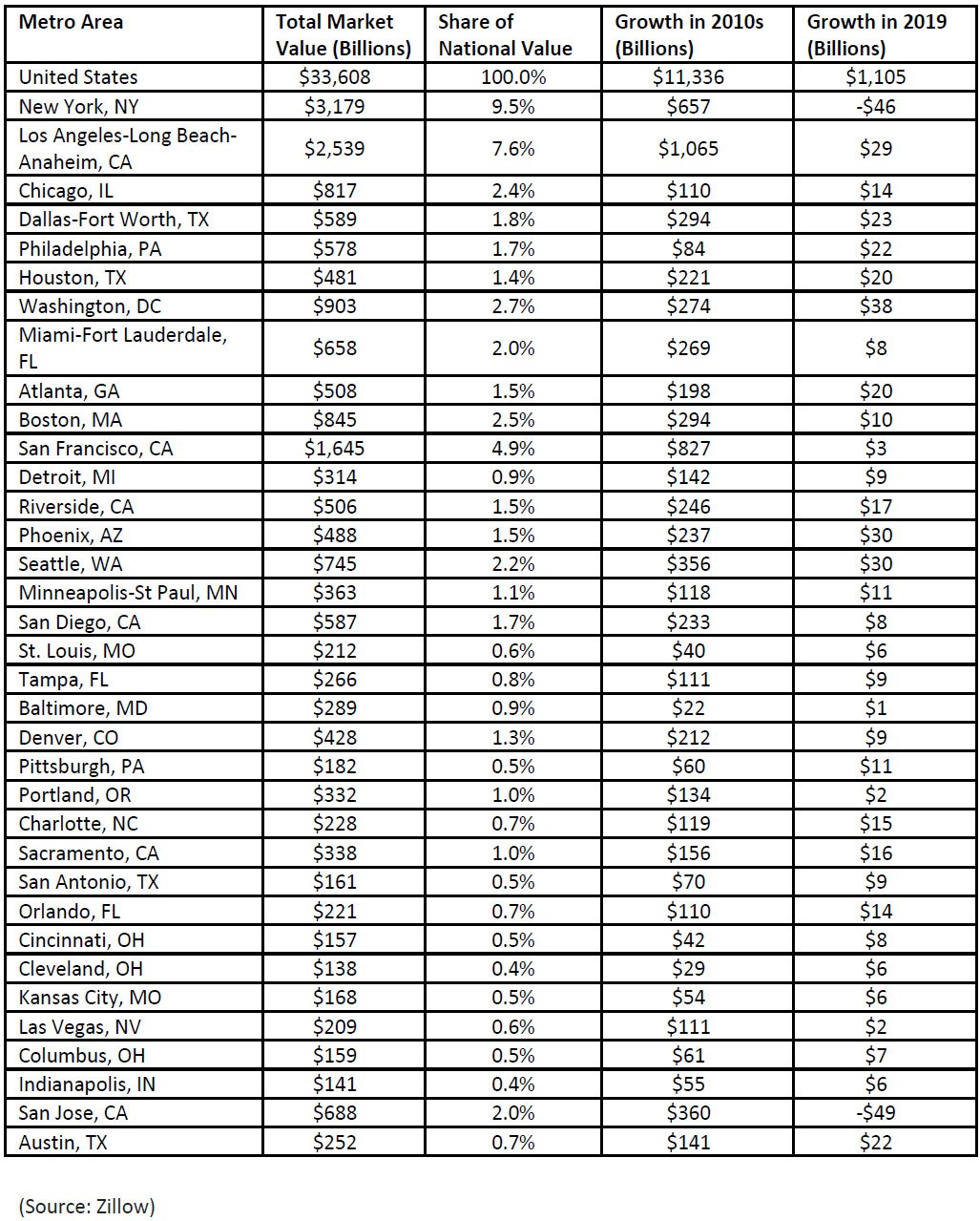