According to a new report by JLL, distribution centers near the nation's top seaports are bursting with consumer goods and other cargo--and that's before the Panama Canal extension opens next spring. Distribution center and warehouse occupancy levels have reached historic highs, while expensive construction and labor costs keep new development sparse in many seaport industrial real estate markets.

JLL's Seaports Outlook Report and index, which ranks the most prominent ports in North America and their surrounding real estate, says that occupancy levels by total square feet have surpassed 2007, which was the high-point of the last real estate boom. 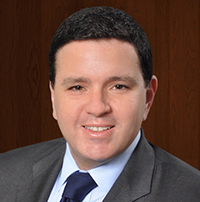 The 15 seaports ranked in JLL's report received a total of 43.4 million Twenty-foot equivalent units (TEU) containers in 2014, marking an 8.5 percent increase from 2007. West Coast cargo volume decreased by 2.2 percent over this time period; while East Coast and Gulf of Mexico cargo volume was up by 25.3 percent. Recent supply chain disruptions on the West Coast have resulted in companies re-evaluating their import strategies, which JLL believes were related to TEU volumes rising faster for Gulf and Eastern Seaboard ports.

The current booming industrial real estate market will see further demand for space once the Panama expansion project completes in April next year.

"Cost, service and risk are the three perennial drivers for supply chain executives as they develop their logistics strategy," said Levy. "As a result, the East Coast/Gulf seaports are gaining favor among industry veterans because they mitigate some risk, provide access to major population centers and connect with the optimal inland transportation mode: rail."

Perhaps most notable is the Port of Savannah coming in at number four. Savannah had TEU growth of 28.5 percent from 2007 to 2014 and industrial development has been pronounced in recent years. Savannah's distribution center real estate market serves as a conduit to inland ports in Atlanta, where goods connect with major East Coast and Midwest rail lines, and the port's location and proximity to Atlanta means that it will only continue to thrive once more ships begin to arrive after the new, wider Panama Canal opens next year.

Long Beach and Los Angeles are anticipated to remain the primary gateway into the United States in the coming years based on their infrastructure, automation enhancements and strong rail connectivity to the rest of the nation. Occupancy on the West Coast is expected to remain strong based on its established markets that are home to notable consumer bases. Additionally, much of the cargo shift to the eastern seaboard is discretionary (goods not destined for local consumption, but can move through any entry point of the shipper's choosing). 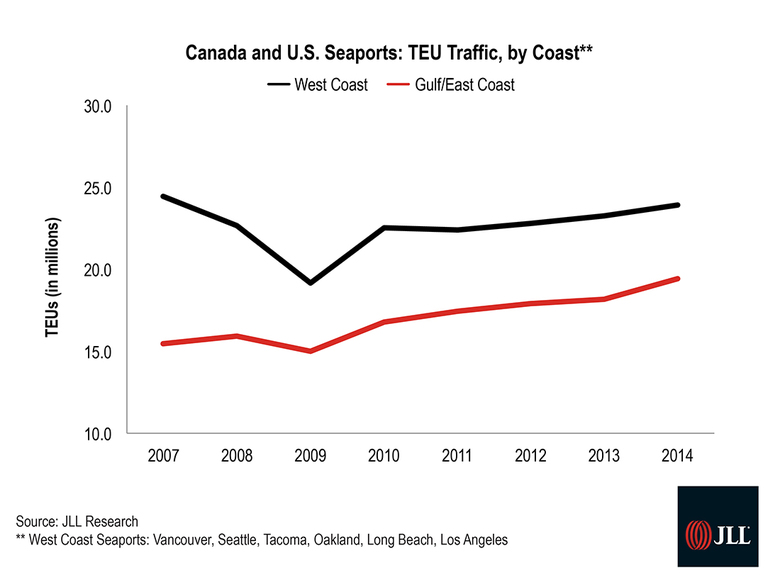 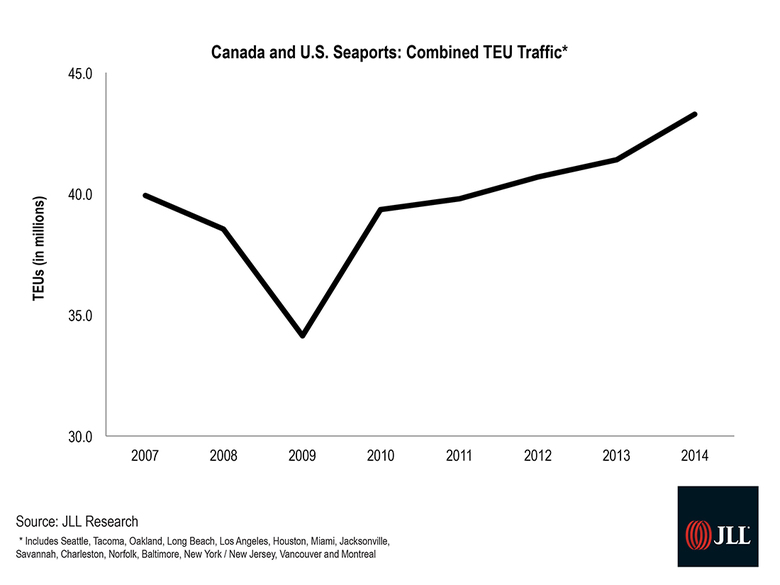