According to a new study by Realtor.com titled America's Top Boom Towns, Gilbert, Arizona took top honors, closely followed by Los Angeles, Dallas and Miami for striking it rich when it comes to new home construction, job creation and an increasing number of households - the golden economic engine for healthy housing market growth. 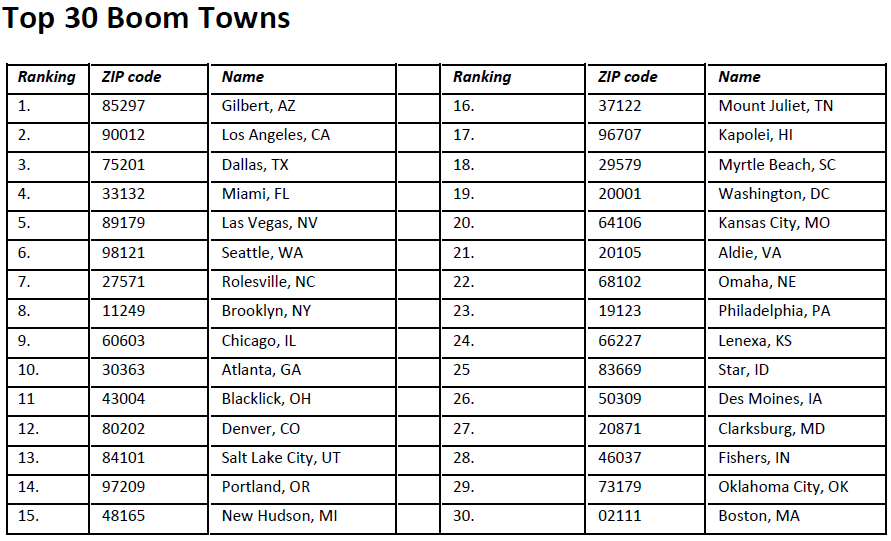 "The strength of the residential real estate market is closely correlated to growth in jobs and households," said Jonathan Smoke, chief economist for Realtor.com. "The good news for these markets is that these growth factors have already started to translate into new construction. At the same time, it may be a year or so before some markets on our list start see an increase in inventory. If anything, this is a road map for where builders should be thinking about where to break ground next."

Part of the Phoenix metropolitan area, Gilbert is located just over 30 miles east of downtown Phoenix in close proximity to where GoDaddy and PetSmart have significant operations. The sunny neighborhood of 85297 is highly sought after by both snowbirds and locals for its close proximity golf courses and country clubs. The biggest draw for locals is the strong school district, Higley Unified School District, that's home to Centennial Elementary, which was ranked No. 1 in the state in 2014.

Los Angeles is the second-largest city in the U.S. The 90012 ZIP code is located in central Los Angeles and encompasses several neighborhoods including Elysian Park, Mission Junction, Little Tokyo and Chinatown. In recent years, the area has seen surge in interest among higher income residents, driven by vibrant cultural offerings - such as the Walt Disney Concert Hill and Dorothy Chandler Pavilion - restaurants and nightlife, as well as new residential development.

Located in downtown Dallas, the 75201 zip code is home to the Dallas Museum of Art, American Airlines Center--where the city's National Basketball Association and National Hockey League teams play - and is just steps away from Baylor University Medical Center. This neighborhood has undergone a dramatic transformation since the early 2000s when the "Dallas Trinity River Project" began bringing parks, trails, and nature centers to the area. It's close proximity to major employers, shopping, restaurants and Klyde Warren Park make this neighborhood highly sought after by millennials. Urban condos, lofts and townhomes are popping up everywhere.

Famous for its beaches and warm climate, Miami is also a hub for finance, commerce, culture, media, entertainment and the arts. Traditionally, downtown Miami was a bustling business center by day that became a ghost town by night, but urban development with projects such as Miami Worldcenter have brought tens of thousands of new residents to the area, many of whom are millennial professionals attracted to the shopping and nightlife as well as their ability to walk to work.

Las Vegas is the most populous city in the state of Nevada and is internationally known as a resort destination. Located roughly 14 miles from the Las Vegas strip, the 89179 zip code primarily encompasses part of a planned community known as Mountain's Edge. Since development of Mountain's Edge began in 2004, it has ranked among the top-selling master planned communities in the U.S. due to its extensive outdoor amenities such as its large scale community parks, trails and open spaces. Two elementary schools - William V. Wright Elementary School and Carolyn S. Reedom Elementary School - are located within the community itself and in close proximity to ZIP 89179.

The 98121 zip code is home to the largest proportion of residents in downtown Seattle, as well as the largest retail area. Ten percent of Seattle residents now live downtown, representing a 12 percent growth in population since 2010. New residential developments like the 707-unit Insignia Towers and the area's wide variety of restaurants, bars and cultural offerings, have made Belltown a major draw in recent years. This is especially true for employees of the area's major employees like Amazon, Microsoft, and Starbucks, who are looking for close proximity to work.

Thirty minutes from Raleigh, N.C., Rolesville is a suburb situated along U.S. Highway 401 in northeastern Wake County and is only 30 minutes from 'Research Triangle Park,' the largest research park in the country with more than 150 companies. Rolesville is known for its strong regional economy and prime positioning, with North Carolina State University, Duke University, and The University of North Carolina all less than an hour away. The Realtor.com Boom Town list isn't the first honor for Rolesville, which has ranked as the Fastest Growing North American City (Forbes.com), Top Housing Market for Investors (Forbes), and Top Public Schools in the U.S. (Greatschools.org). People come here for the jobs, schools and nice weather.

ZIP code 11249 encompasses the Williamsburg neighborhood. Over the past 15 years, the neighborhood has become known as a "hipster" hotspot because of the many artists and creative-minded millennials who have moved there. It is filled with restaurants, bars, art galleries, shops and music venues. Housing developments are popping up throughout this region including several new residential towers, including Rocket Factory Lofts, distributed throughout Williamsburg.

Chicago is the economic heart of the Midwest and third most populous city in the U.S. Its metropolitan area includes prominent businesses such as United Airlines, Boeing, and Kraft, universities like Northwestern, the University of Chicago, DePaul and Loyola and cultural institutions such as the Art Institute of Chicago. The 60603 zip code extends from Lake Michigan to South Wells Street and West Madison to the North and West Adams to the South and is in proximity to businesses and public transportation. In addition to the West Loop's thriving social scene of popular restaurants and bars, Google, Uber and Twitter all have offices nearby.

The Atlanta metropolitan area is home to 5.5 million people and is the 10th-largest metropolitan area in the nation. The 30363 zip code of Atlantic Station is located on the site of the former Atlantic Steel Mill, now a thriving urban community. The neighborhood's luxury condos, such as The Atlantic, as well as its shopping, restaurants and entertainment options are attracting an influx of young professionals to the neighborhood. 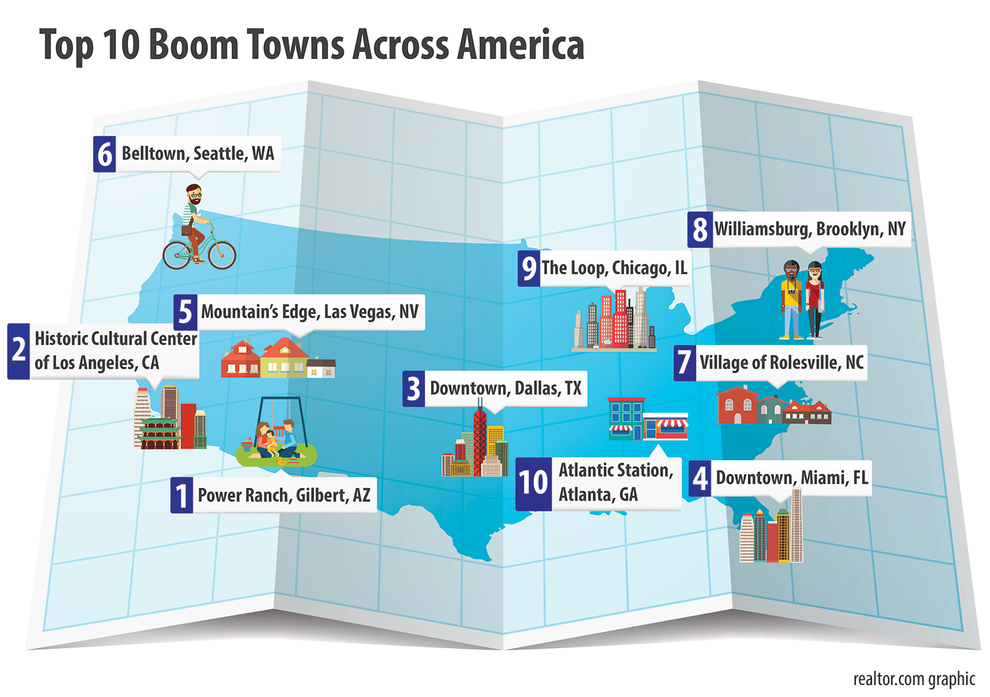