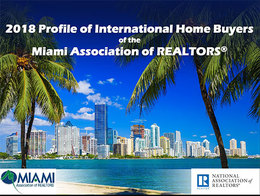 "Diverse, multilingual and located in a subtropical climate, it is easy to see why Miami remains the top U.S. destination for international home buyers," MIAMI Chairman of the Board José María "Chepe" Serrano said. "South Florida welcomes all cultures, is growing its economy, adding cultural institutions and attracting more corporate companies."

Brazil finished as the No. 1 foreign country purchasing South Florida real estate for the first time since MIAMI and NAR began conducting the study seven years ago.

The 12 top countries of origin for consumers purchasing properties in South Florida are:

Brazil is the No. 1 Country Buying in Miami-Dade County

The top countries of origin for consumers purchasing properties in Miami-Dade are:

Colombia is the No. 1 Country Buying in Broward County

The top countries of origin for consumers buying real estate in Broward County are:

Canada is the No. 1 Country Buying in Palm Beach County

The top countries of origin for consumers buying real estate in Palm Beach County are:

Non-resident foreign buyers (Type A), who are non-U.S. citizens with permanent residences outside the United States, accounted for 63 percent of MIAMI's foreign buyers compared to 39 percent nationally.

According to the new MIAMI and NAR survey, about 58 percent of all international residential transactions in South Florida were made in all-cash. In comparison, about 47 percent of U.S. buyers paid cash.

South Florida international homebuyers prefer condominiums (53 percent) in the central/urban areas (51 percent), which they intend to use mainly as residential rental, vacation home or both (66 percent).

About 72 percent of MIAMI members worked with an international consumer in the past 12 months. That's more than three times the national figure of 23 percent.