It is a big day for the Miami office market.

Akerman LLP, whose name will grace the top of the building at Brickell City Centre Green, is one of the largest law firms in the United States with offices in 20 cities across the country. The firm's Miami office is the largest of any law firm in Florida with 160 lawyers in one location. Akerman LLP has a significant legal role in the development of Brickell City Centre as real estate and land use counsel to Swire Properties.

"That Akerman has chosen Brickell City Centre for its Miami office is an honor," said Megan Kelly, executive vice president of Swire Properties Inc. "Miami has developed into a worldwide center for finance and trade, and this very prestigious tenancy will strengthen Brickell City Centre's positioning relative to the market opportunities that Miami's evolution is creating," she said. 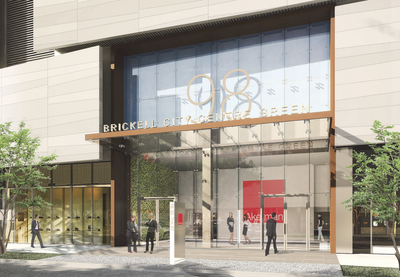 Coupled with the healthy demand for Class A office space in Brickell, Brickell City Centre recently signed Saks Fifth Avenue as retail anchor and the first residential tower, Reach, is over 70 percent sold. The remaining office building, known as Two, will be completed in early 2016.

"We see Brickell City Centre as a remarkable, mixed-use environment that will offer our people and our clients a truly unique experience," said Andrew Smulian, Akerman Chairman & CEO. "These new offices will provide Akerman with the opportunity to apply design thinking to not only where we work but how we work. Our objective is to create an efficient, dynamic space that encourages collisions of discovery and innovation - hallmarks of our law firm and our client-centered culture."

Tere Blanca of Miami-based Blanca Commercial Real Estate, with support from Alexander Cahlin and David Valdez, represented Akerman LLP in the deal. The Miami office will be located on the East block of Brickell City Centre at 98 SE Seventh Street, with direct access to the Eighth Street Metromover station, which Swire Properties is currently redesigning and enhancing. Terms of the transaction were not released.

Often coined the Wall Street of Miami, the Brickell neighborhood has emerged into South Florida's epicenter of international banking and business, and acts as one of the largest financial districts in the United States. Aided by the Metromover train system, Brickell is one of the most connected neighborhoods in downtown Miami.