According to CoreLogic's 2019 CoreLogic Storm Surge Report, more than 7.3 million single- and multi-family homes in the U.S. along the Gulf and Atlantic Coasts have the potential for storm surge damage, with a total estimated reconstruction cost value (RCV) of nearly $1.8 trillion. Early predictions from the National Oceanic and Atmospheric Administration (NOAA) indicate a near-normal year for the 2019 Atlantic hurricane season.

The CoreLogic Storm Surge report provides an annual evaluation of the number of homes in the United States that are vulnerable to storm surge in the Gulf of Mexico and Atlantic Basin, which includes every state from Texas to Maine, approximately 3,700 miles.

"It is essential to understand and evaluate the total hazard exposure of properties at risk of storm surge prior to a hurricane event, so insurers can better protect and restore property owners from financial catastrophe," said Dr. Tom Jeffery, senior hazard scientist at CoreLogic. "Damage from storm surge and inland flooding has proven to be far more destructive than wind in recent years, so we cannot rely on the hurricane category alone to give us a sense of the potential loss. A Category 5 hurricane in an area with few structures may be far less devastating than a Category 1 hurricane in a densely populated area."

CoreLogic looked at 85 Core-Based Statistical Areas (CBSA) to determine the metropolitan areas with the greatest number of homes exposed to and the highest RCV from storm surge flooding. 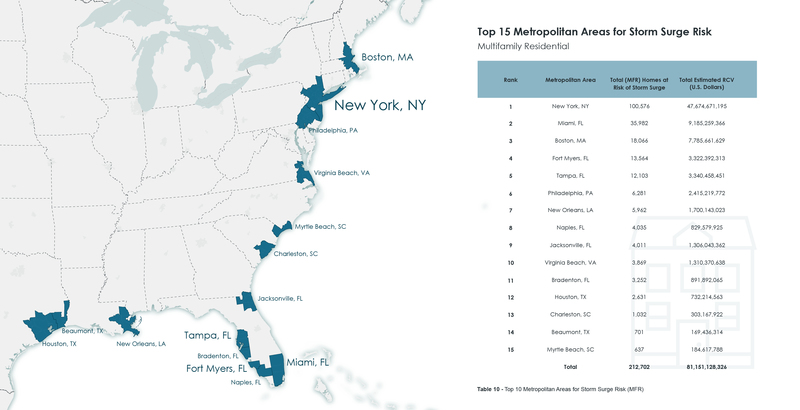