According to RealtyTrac's Q3 2014 U.S. Institutional Investor & Cash Sales Report, which shows that sales to institutional investors -- entities that purchase at least 10 properties in a calendar year -- accounted for 4.3 percent of all sales of single family homes and condos in the second quarter, down from 5.0 percent in the previous quarter and down from 5.3 percent a year ago to the lowest level since the fourth quarter of 2010.

Meanwhile all-cash sales accounted for 33.9 percent of all sales of single family homes and condos nationwide in the third quarter, down from 36.9 percent in the second quarter and unchanged from a year ago.

"Cash sales continue to be an important piece of the real estate puzzle right now, representing one in every three home sales nationwide in the third quarter of 2014 and helping to drive up U.S. median home prices 38 percent over the last two and half years," said Daren Blomquist, vice president at RealtyTrac. "As institutional investors and other cash buyers slow down their purchasing in many markets across the country, more traditional buyers -- including first-time homebuyers and move-up buyers -- will need to increasingly fill in the missing puzzle pieces to maintain the momentum of the housing recovery.

"Institutional investors are still actively purchasing single family rentals, but continue to gravitate toward markets where lower-end inventory is still available," Blomquist continued. "Meanwhile there has been a recent surge in cash buyers in some markets, often coinciding with either a rebound in distressed sales attracting bargain-hunting cash buyers or a booming job market engendering a competitive bidding environment where cash is king."

Among metropolitan statistical areas with a population of at least 500,000, those with the highest share of institutional investor purchases in the third quarter were Memphis, Tenn. (16.4 percent), Charlotte-Gastonia-Concord, N.C, (14.2 percent), Columbus, Ohio (12. 6 percent), Atlanta-Sandy Springs-Marietta, Ga., (12.5 percent), and Orlando, Fla. (11.0 percent).

Florida has the top five metros for cash sales share, all above 50 percent

Among metropolitan statistical areas with a population of at least 500,000, those with the top five highest percentages of cash sales were all in Florida: Miami-Fort Lauderdale-Pompano Beach (59.1 percent), Cape Coral-Fort Myers (55.8 percent), Sarasota-Bradenton-Venice (54.5 percent), Tampa-St. Petersburg-Clearwater (51.1percent) and Palm Bay-Melbourne-Titusville, Fla. (50.9 percent). 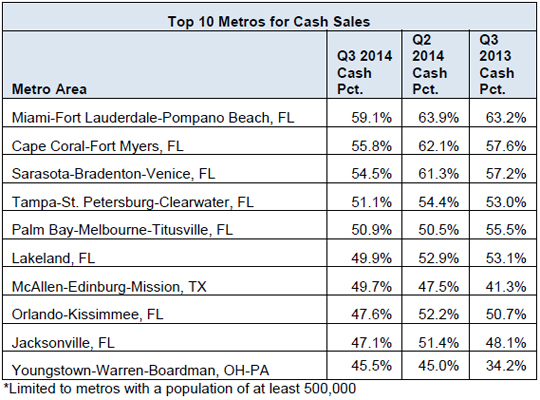