According to a new report by Seattle-based Redfin, luxury home price growth in the U.S. slowed significantly in the fourth quarter of 2014.

Redfin states that homes priced in the top 5 percent of all 33 U.S. States the company operates within grew only 3 percent year over year in Q4, 2014, after growing earlier over 16 percent in Q1 of 2014. Last quarter's results mark the lowest level of growth in luxury home prices since 2012.

But Redfin did see significant regional variation across its markets. For example, Miami was a major breakaway city from this slowing price growth trend with luxury home prices in Miami Beach rising 66 percent from the previous year, boosted by an influx of buyers from Europe and South America, while in Boulder, Colorado, they declined by 18 percent.

"Locals haven't been part of the party," said Redfin agent Aaron Drucker in Miami.  "In Miami Beach, downtown and in Brickell, many condos are empty and most sales are in cash because they are second, third or even fourth homes for foreign owners and the U.S. elite who want to preserve their wealth in U.S. real estate." 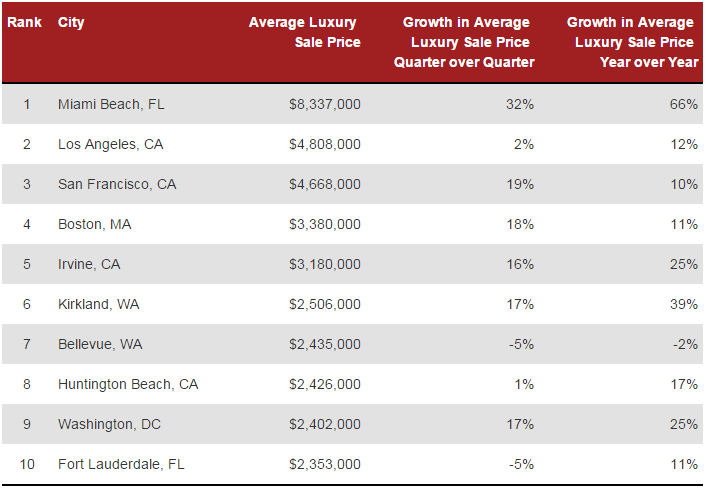