According to the Miami Association of Realtors' Realtor Commercial Alliance, Miami's commercial vacancy rates continue to rank among the lowest in Florida, leading to more local investment from global companies and investors.

Miami's vacancy rates for office (14.9 percent), industrial (5.3 percent), retail (6.3 percent), and multifamily (4.4 percent) are the lowest among major cities in Florida, according to a May 2015 Commercial Outlook report from the National Association of Realtors (NAR) and Reis, Inc., a leading provider of commercial real estate market information. Each of Miami's commercial sectors are performing better than the U.S. average, except for multifamily which is 0.1 percent lower. The national vacancy rates in May were 15.6 percent for office, 8.4 percent for industrial, 9.6 percent for retail and 4.3 percent for multifamily, according to NAR and Reis.

"One of the world's top global cities, Miami has become a launching pad for new industries," said Barbara Tria, the 2015 Miami Commercial Alliance President. "Technology companies and other businesses are moving to Miami largely because of the region's top-tier cultural offerings, outdoor lifestyle, and affordability compared to other major cities around the globe."

Miami's 14.9 percent office vacancy rate in May ranks as the 21st lowest out of 82 major U.S. cities, according to the NAR and Reis report. New York leads the nation at 8.9 percent. Statewide, Miami's office vacancy rate is performing better than Florida's major cities. The Sunshine State's other major metropolitans had the following rates: Fort Lauderdale (18.6 percent), Jacksonville (20.4 percent), Orlando (16.5), Palm Beach (16.5) and Tampa (19.7). The national average is 15.6.

South Florida's growing, multilingual workforce is one reason for its low office vacancy rate. Miami-Dade County added 33,700 jobs across several sectors from April 2014 to April 2015, a 3.1 percent increase, according to job numbers released May 22. Miami had the third-largest job gain in Florida behind Orlando and Tampa. Miami's unemployment rate from April 2014 to April 2015 decreased by 0.7 percentage points, to 6.2 percent from 6.9 percent.

Miami's industrial vacancy rate of 5.3 percent is the third-lowest in the nation among the 82 major American cities studied by NAR and Reis. Only Orange County (Calif.) and Los Angeles performed better than Miami in the industrial sector in May, registering vacancy rates of 3.4 and 3.6 percent, respectively. Florida's other major metropolitans had the following rates: Fort Lauderdale (8.2), Jacksonville (6.9), Orlando (10.3), Tampa/St. Petersburg (7.8), and Palm Beach (5.5). The national average is 8.4.

PortMiami is the top-ranked container cargo port in Florida with 900,000 TEUs handled each year. The port has an opportunity to expand its international business as it is deepening its channel from its current 42-foot depth to 50-52. When the deep dredge project is completed, PortMiami will be the only U.S. port south of Norfolk, Va. that can accommodate the new, mega cargo vessels that will pass through the expanded Panama Canal.

Miami has the 15th lowest retail vacancy rate among U.S. major cities, according to the NAR and Reis report. Miami's 6.3 percent rate is considerably lower than Florida's other large metropolitans. Fort Lauderdale (9.3 percent), Jacksonville (12.9), Orlando (11.0), Palm Beach (9.5) and Tampa (10.6) are higher than Miami. The national average is 9.6. 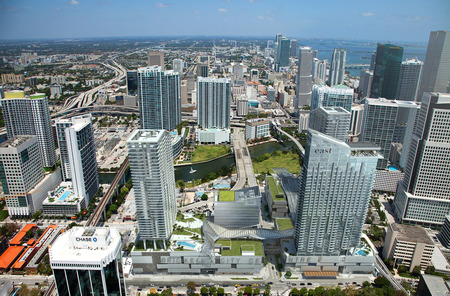 Miami's tourism and multilingual employment base are just two reasons why major developers are bringing new retail ventures to the region. Earlier this year, the company that owns and runs the largest mall in America announced plans to build the nation's largest shopping mall in northwestern Miami-Dade, a roughly 200-acre entertainment complex with submarines, a Legoland, sea lions and an artificial ski slope. American Dream Miami is projected to cost as much as $4 billion to build.

Brickell City Centre and The Mall at Miami World Center are two other significant Miami retail ventures. At Brickell City Centre, Hong Kong developer Swire Properties will deliver 500,000 square feet of retail space anchored by Saks Fifth Avenue by late 2016. The Mall at Miami Worldcenter, in the heart of downtown, will complete 765,000 square feet of restaurant, retail and entertainment space by 2017.

The vacancy rate for Miami's multifamily market is tied for 38th among 82 major U.S. metros, according to the NAR and Reis report. Miami's 4.4 percent multifamily vacancy rate is the lowest in the state. Fort Lauderdale (5.2 percent), Jacksonville (7.0), Orlando (6.1), Palm Beach (5.6), and Tampa (5.0) all have higher rates. The national average is 4.3 percent.