Florida is epicenter of foreign investment, attracted 20% of all foreign buyers in U.S.

According to the National Association of Realtors, a decline in global growth and low housing inventory contributed to a steep drop in foreign investment in U.S. residential real estate over the past year.

NAR's Profile of International Transactions in U.S. Residential Real Estate 2019 revealed that foreign buyers purchased $77.9 billion worth of U.S. existing homes from the 2019 survey reference period, a 36% decline from the level reached in the previous 12 months ($121 billion). Non-resident foreign buyers accounted for $33.2 billion of U.S. existing-home sales, a 37% decline from the prior level of $53 billion. Resident foreign buyers - that is, recent immigrants - purchased $44.7 billion of residential property, a 34% drop from the prior level ($67.9 billion).

"A confluence of many factors - slower economic growth abroad, tighter capital controls in China, a stronger U.S. dollar and a low inventory of homes for sale - contributed to the pullback of foreign buyers," said Lawrence Yun, NAR chief economist. "However, the magnitude of the decline is quite striking, implying less confidence in owning a property in the U.S."

For the seventh consecutive year, China exceeded all other countries in terms of dollar volume of purchases, buying an estimated $13.4 billion worth of residential property, a 56% decline from the previous12 months. The Chinese economy is growing at a slower pace compared to past years, slowing to 6.3% in 2019 compared to 6.9% in 2017. The Chinese government has also tightened the monitoring of dollar outflows since 2016 to manage its foreign exchange reserves.

Following China, the next top foreign buyer for 2019 was Canada at $8.0 billion. While Chinese investors and Canadian investors tied concerning the number of purchases, on average, Chinese buyers bought properties at a higher price point. Therefore, China ranked ahead of Canada in terms of dollar volume.

The third top international buyer was India at $6.9 billion, the United Kingdom was fourth at $3.8 billion and in fifth was Mexico at $2.3 billion. Each of the top five buyers experienced a decline in the dollar volume of purchases.

International Buyers - Where Did They Go?

Following historical trends, Florida was at epicenter of foreign investment. The state attracted 20% of foreign buyers. Forty-two percent of Canadians purchased property in Florida. "Many Canadians and other foreigners found Florida so enticing because of its lenient tax laws," said Yun. "Additionally, many Florida metro areas have an inventory of cheaper properties, relatively speaking - a combination which makes the state a very popular destination."

California followed Florida, accounting for 12% of international purchases. Thirty four percent of Chinese buyers purchased property in California, which represents a decline from one year ago.

The third most popular destination among international buyers was Texas (10%), particularly desirable among Indian and Mexican buyers.

A few other significant destinations were North Carolina, Illinois, New York and Georgia. Each of these states accounted for 3% of all foreign buyers.

Forty-four percent of foreign buyers purchased in a suburban area, while 76% purchased single detached family homes and townhomes. The median purchase price for foreign buyers was $280,600, slightly higher than the $259,600 average for all U.S. existing homes sold. According to Yun, the price difference is a reflection of the choice of location and the kinds of properties desired by foreign buyers.

Eight percent of international buyers paid $1 million or more for their property, compared to just 3% of all U.S. existing homebuyers.

Resident foreign buyers - those living in the United States either as recent immigrants or those holding visas for professional, educational or other purposes - typically purchased properties at a slightly higher price point ($282,500) compared to non-resident foreign purchasers ($277,700).

"Even though numbers were lower this year than during the previous 12 months, international investors and buyers still spent and invested a great deal of money in U.S. real estate," said NAR President John Smaby. "Home buyers from across the globe know that the U.S. market is still a safe, secure and promising place to invest."

The survey also showed that international buyers are more likely to purchase their homes in cash than all existing homebuyers. Forty-one percent of the reported transactions were all-cash sales, in comparison to 21% for all existing-home purchases during the 2019 assessment reference period.

Canadian buyers, who primarily live abroad, were the most likely to pay all cash (75%). The majority of Asian Indian buyers, most of whom resided in the U.S. as recent immigrants or visa holders, obtained a U.S. mortgage. Almost half of Chinese buyers made an all-cash purchase. 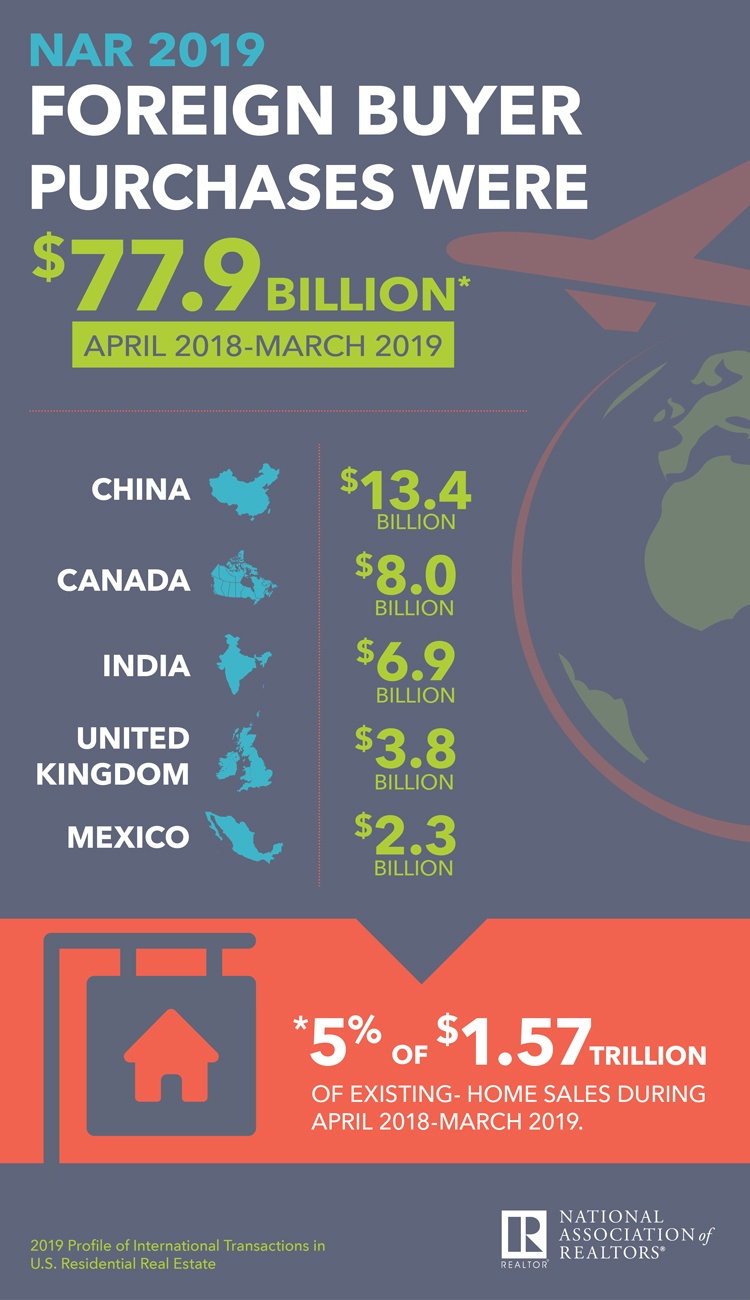