The developers of Miami's new and uber-luxe One Thousand Museum reported approximately $24 million in new condo sales contracts signed within 24 hours of their 24-hour concrete pour. 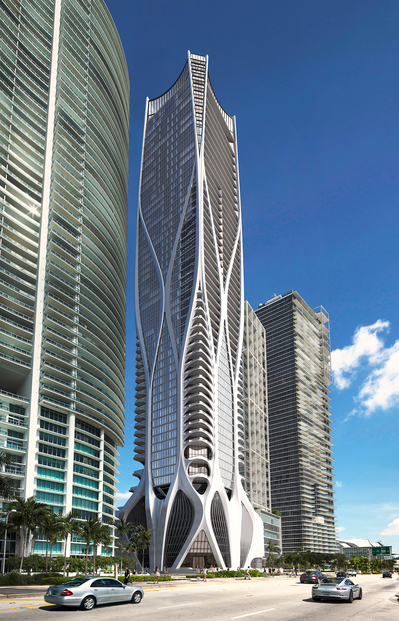 "If we knew we'd sell $1M an hour, we would have poured longer," said Louis Birdman, one of the developers of the 62-story skyscraper. Four contracts were signed during the pour with buyers from the US, Mexico City, and Argentina. All sales were for half-floor units ranging in price from $5.8 to $6.5 million.

The 83-unit tower, slated for completion in late 2017, will expect 4,800 pieces of the project's revolutionary exoskeleton being shipped from Dubai to initiate this installation.

Once complete, One Thousand Museum will be the first building in the country to utilize this glass-fiber reinforced concrete (GFRC) outer shell as a permanent formwork.

"Zaha Hadid is a visionary. The buildings she designs not only make headlines worldwide, but also garner critical acclaim and promise to be in history books for generations to come," said Louis Birdman on the architectural component of the project.

Some noted amenities include 30,000 square feet of luxury communal areas include a two-story amenity space at the top of the tower, an aquatic center, garden areas, event spaces, a two-story health spa, multiple art galleries, a theatre, and the city's only private rooftop helipad.