National property broker Redfin is reporting this week that a record 32.3% of Redfin's website users looked to move to a different U.S. metro area in the first quarter of 2022. That's up from 31.5% a year earlier and up significantly from 26% in 2019, before the pandemic. Skyrocketing home prices and rising mortgage rates have made relocating to a more affordable area the only viable option for some prospective homebuyers.

The share of homebuyers looking to relocate to other parts of the country picked up in mid-2020 as the pandemic took hold, and it has remained elevated since then. The combination of last year's record-low mortgage rates and remote work encouraged many Americans to relocate.

Continually increasing home prices-along with quickly rising mortgage rates, which make monthly payments even higher-are adding fuel to the fire this year. As more homebuyers move away from pricey coastal areas, including San Francisco, Los Angeles, Seattle and Boston, we're seeing early signs of a housing-market slowdown in those metros.

The number of homebuyers leaving the Seattle area has picked up significantly over the last two years, an apt example of how the pandemic is changing where people choose to live. The typical home in Seattle sold for $750,000 in February (up 15% year over year), making it the eighth-most expensive major metro in the U.S., behind only coastal California. Those soaring home prices, combined with a high concentration of tech jobs-which can typically be done remotely-have encouraged many Seattleites to seek more affordable, sunnier pastures.

At the same time, would-be homebuyers leaving Seattle is one reason why its housing market is showing early signs of cooling, with a slowdown in the number of buyers contacting Redfin agents in 2022 compared to last year and a year-over-year decline in mortgage applications.

Seattle had a net outflow of nearly 24,000 residents in the first quarter, up from about 10,000 a year earlier and about 4,000 two years earlier, before the pandemic began. Net outflow is a measure of how many more Redfin.com users looked to leave an area than move in.

Phoenix is the number-one destination for Redfin.com users leaving Seattle. While Phoenix home prices are up significantly from a year ago, the $456,000 median is still far lower than Seattle's.

"I've worked with many home sellers recently who are moving to a completely new area," said Seattle Redfin agent Nicole McCormick. "A lot of them are remote workers-or people who feel confident they'll be able to get a new job-leaving for sunnier places where they can get more home for their money, like Phoenix or Sacramento. There's also a pattern of selling and moving to the San Juan Islands, located a few hours away from Seattle. Those people are trading the city for a more rural, outdoorsy lifestyle-but homes are just as expensive."

Seattle had the fifth-biggest outflow of any major U.S. metro in the first quarter, behind four other expensive coastal job centers: the Bay Area, Los Angeles, New York and Washington, D.C. 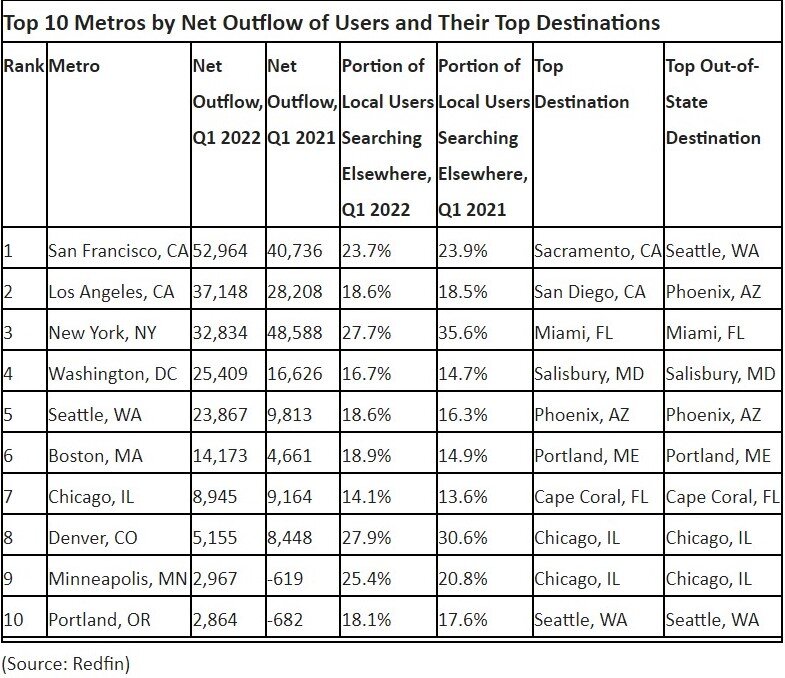 The number of residents flowing into Miami in the first quarter was up nearly six fold from two years earlier, and it has almost tripled in Tampa and almost doubled in Sacramento. 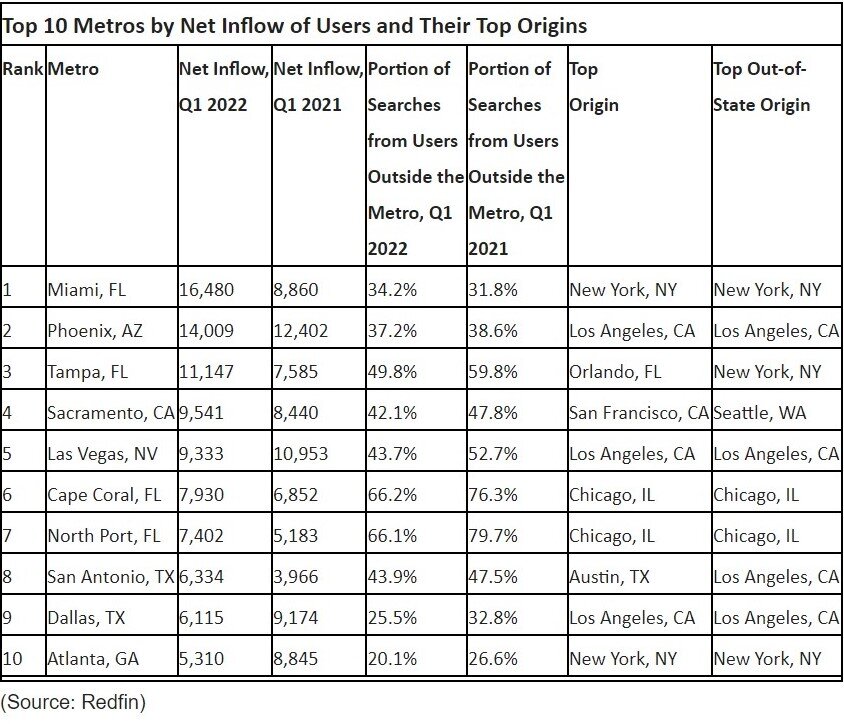