The Mortgage Bankers Association announced this week at their annual national conference in San Diego that they expect to see $905 billion in purchase mortgage originations during 2016, a ten percent increase from 2015.

"We are projecting that home purchase originations will increase in 2016 as the US housing market continues on its path towards more typical levels of turnover based on steadily rising demand and improvements in the supply of homes for sale and under construction.  Despite bumps in the road from energy and export sectors, the job market is near full employment, with other measures of employment under-utilization continuing to improve," said Michael Fratantoni, MBA's Chief Economist and Senior Vice President for Research and Industry Technology.  "We are forecasting that strong household formation, improving wages and a more liquid housing market will drive home sales and purchase originations in the coming years.

"Our projection for overall economic growth is 2.3 percent in 2016 and 2017 and 2 percent over the longer term, which will be driven mainly by consumer spending as households continue to buy durable goods, such as cars and appliances.  The housing sector will contribute more to the economy than it has in recent years.  We are forecasting a 17 percent increase in single family starts in 2016 and a further increase of 15 percent in 2017.  Weaker growth abroad will mean fewer US exports, which will be a drag on growth over the next couple of years.  Recurring flights to quality, a demand for safe assets from investors abroad, will keep longer-term rates lower than the domestic growth environment would warrant.

"Coincident with a strengthening economy, we expect the Federal Reserve will begin to slowly raise short-term rates at the end of 2015.  At some point after liftoff, the Fed will begin to allow their holdings of MBS and Treasury securities to run off, likely beginning in late 2016.  Even with these actions, we expect that the 10-Year Treasury rate will stay below three percent through the end of 2016, and 30-year mortgage rates will stay below 5 percent.

"Refinance activity will continue to decline as there are few remaining households that can benefit from an interest rate reduction and because rates will gradually begin to rise from historic lows in the coming years.  Home equity products may see an increase in demand as home prices continue to increase at a decelerating rate," Fratantoni said. 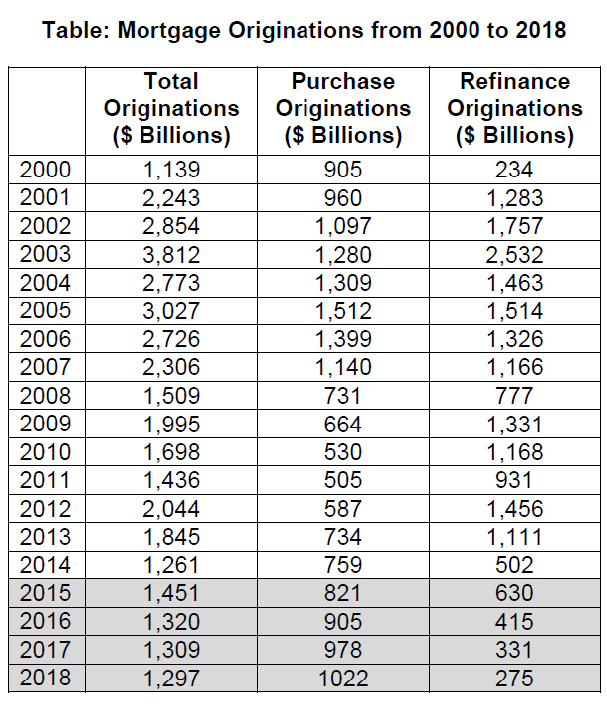