Thirteen Percent of U.S. Homes with a Mortgage Have Negative Equity in Q2


According to Irvine, California based RealtyTrac's Q2 2015 U.S. Home Equity & Underwater Report, as of the end of the second quarter of 2015 there were 7,443,580 U.S. residential properties that were seriously underwater -- where the combined loan amount secured by the property is at least 25 percent higher than the property's estimated market value -- representing 13.3 percent of all properties with a mortgage.

"Slowing home price appreciation in 2015 has resulted in the share of seriously underwater properties plateauing at about 13 percent of all properties with a mortgage," said Daren Blomquist, vice president at RealtyTrac. "However, the share of homeowners with the double-whammy of seriously underwater properties that are also in foreclosure is continuing to decrease and is now at the lowest level we've seen since we began tracking that metric in the first quarter of 2012." 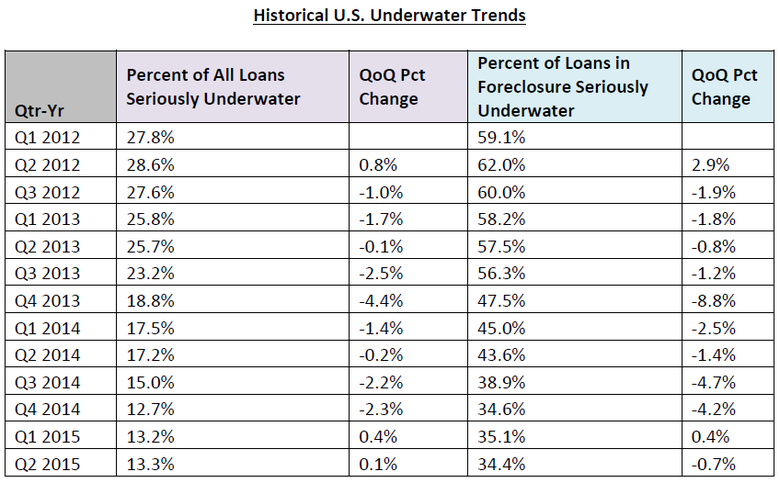 Share of equity rich mortgaged properties up 1 million from year ago, down 300K YTD

"Although the number of equity rich homeowners with a mortgage has increased by 1 million compared to a year ago, that number dropped by nearly 300,000 between the end of 2014 and the middle of 2015," Blomquist added. "The number of homeowners with a mortgage who have at least 20 percent equity has dropped by more than 900,000 during the past six months, indicating that homeowners who have gained substantial equity thanks to the housing price recovery over the past three years are taking advantage of that newfound equity. Some are leveraging that equity into a higher LTV refinance or a move-up purchase, some may be downsizing into an all-cash purchase and some may be cashing out of homeownership altogether. Those homeowners cashing out of homeownership altogether would explain why the nation's overall homeownership rate continued to decline in the second quarter even as homeownership rates among millennials increased."

"Over the past two years, the Seattle region has seen the percentage of homeowners who are seriously underwater drop by over 56 percent, one of the fastest and most impressive drops in the country ," said Matthew Gardner, chief economist at Windermere Real Estate, covering the Seattle market. "Usually a decline of this magnitude would suggest an uptick in the number of homes for sale, but unfortunately for Seattle, I don't see this taking place. Many of these homeowners are simply too apprehensive or don't have the financial capacity to move. But what we lose in new listings, we gain in overall market stability." 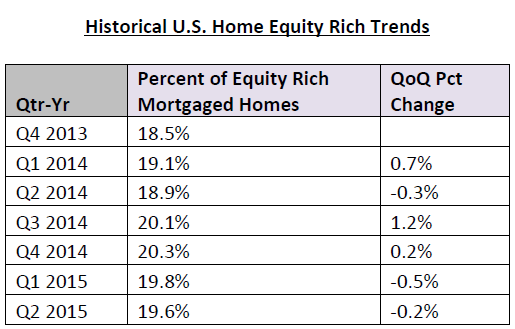 Markets with the most seriously underwater properties

"Many consumers in foreclosure don't understand the positive effects of the increased equity we are seeing across the Ohio markets, and the opportunities that this might bring in assisting them to avoid foreclosure," said Michael Mahon, president at HER Realtors, covering the Cincinnati, Dayton and Columbus markets in Ohio. "Across much of Ohio, housing demand is driving increased prices and lower days on the market, contributing to positive equity growth. For homeowners facing troubled financial circumstances due to job loss, divorce, death in the family, or health concerns, the best advice would be to consult with a real estate agent early in the process."

Markets with the highest share of positive equity foreclosures

"The strong South Florida price increases over the past few years have moved many homeowners from negative to positive equity. We would encourage the remaining distressed homeowners to ask for a Broker Price Opinion (BPO) regarding the value of their property -- many may be surprised at their improving value," said Mike Pappas, CEO and president of Keyes Company, covering the South Florida market.

"Many homeowners that found themselves upside down in their homes just a few years ago are finding that they are now in a much better position with equity to spare, based on the strong appreciation we have experienced over the last few years," said Greg Smith, owner/broker at RE/MAX Alliance, covering the Denver market in Colorado.  "When we look at other areas, such as Las Vegas, where homes seriously underwater have dropped by close to 50 percent, we see the strengthening of the economy as a whole provided by housing."