Regional U.S. Growth Favors Urban or Suburban, But Rarely Both

Yardi further reports in great detail urban areas of the Northeast region--which includes Philadelphia, New York City, and Boston--grew by 16.5%. This is surprising given how dense these cities already are and represents more than 55 million square feet across 290 properties. What's more, this designation doesn't even consider the central business districts, which collectively grew by 5.3% for an additional 24 million square feet.

Also, no region added more square footage than the Northeast--at 130.5 million. The Southwest region added more than 108 million square feet of office space in the last 10 years, but in contrast to the Northeast, a full three-quarters of the added square footage was in suburban locations. This relationship makes a lot of sense given the composition of these two regions--with dense cities like New York City and Boston in the northeast and the sprawling suburbs of Dallas-Fort Worth and Houston in the southwest; similar to Los Angeles and Orange County in southern California, says Yardi Matrix.

The Western region was no different. Approximately 58 million square feet were added as a whole, 43 million of which was in the suburbs. This includes markets like Denver, Salt Lake City, Las Vegas, and Phoenix, which exemplify suburban sprawl. Driven by this phenomenon, "tech corridors" have also sprung up--such as the Buckhead in Atlanta, the Platinum Corridor in Dallas, and Silicon Slopes in Salt Lake City.

Part of the reason for the greater expansion in the west is the availability of cheap land for development, as well as the adoption of office campuses versus office buildings. Companies like Google and Facebook also introduced a plethora of new employee amenities--like free snacks and meals, the ability to bring pets to work, and free transportation to and from work--creating an overall relaxed atmosphere that's been historically absent in the office buildings of dense city centers, says Yardi.

The Bay Area is punctuated by one of the most striking suburban expansions. In 2008, primary suburban locations held most of the market's office space with 141 million square feet. But, 10 years later, the same area added another 28 million square feet--an increase of 20%. This is an impressive feat, to be sure, given that almost all this development was in Silicon Valley.

Companies that defined this transformation include big names like Hewlett-Packard, Intel, Facebook, Google, and Uber. From one of the country's first radio stations to the first silicon computer processing company to today, Silicon Valley has been the center of the tech world for more than half a century, and it remains home to many companies whose products have changed our lives.

However, with skyrocketing costs of living and the increasing ease and popularity of remote working, Silicon Valley's popularity is starting to wane. For example, Salt Lake City has recently seen impressive growth on the heels of the Bay Area. Silicon Slopes--Utah's tech corridor along I-15 south to Lehi and Provo--has accounted for most of the development, adding more than 9 million square feet of office space since 2008. The area has also drawn tech industry giants the likes of Oracle, Visa, and Tesla.

Phoenix's office growth followed suit and expanded largely in suburban locations. Much like Salt Lake City, the cheaper cost of living in Phoenix and access to an increasingly educated workforce has incentivized large corporations such as IBM and Boeing to move or expand their offices here.

Of the 131 properties added in the last 10 years, 111 were suburban, representing 11.6 million square feet. Most of this growth was in the east valley along the 101 in Chandler, Tempe, and Scottsdale. Though, the single largest addition was in the urban part of Tempe along the lake. The Marina Heights campus--completed in 2017 and State Farm's regional headquarters--has 2 million square feet of office space across five buildings.

Seattle and Portland Grow Together

The Pacific Northwest markets of Seattle and Portland grew by 17% and 11.2%, respectively, and in very similar ways. The primary urban areas here expanded by far larger margins than the suburbs and the CBDs.

In the Seattle market, Bellevue, combined with the central neighborhoods of Lake Union, Denny Triangle, Belltown, and Pioneer Square, increased their office footprint by almost 50%, adding 13.9 million square feet. By comparison, the rest of the market added 8.25 million square feet combined. The expansion of Amazon's campus is responsible for much of this growth, but it has also attracted many other businesses to the area, as well.

The Texas markets have also had considerable growth, but in different ways. Like the Bay Area, Houston and Dallas-Fort Worth have had similar growth in the primary suburban areas. But expansion has been localized to only a few areas. In Houston, The Woodlands alone added over 5.7 million square feet. The Energy Corridor and adjacent neighborhoods--including Memorial Villages, Westchase, and Briargrove--added a whopping 47 buildings totaling 12.5 million square feet.

The Platinum Corridor, Plano, and Las Colinas grew the most in Dallas. These primary suburban locations collectively added 17.7 million square feet--a 19% increase in 10 years--but also represented more than half of all square footage added in the entire Dallas-Fort Worth market. Dallas continues to be a popular choice for many company headquarters, including Exxon Mobil and McKesson.

Austin has also become one of the cities that is drawing startups and tech sector jobs from the Pacific Northwest and Silicon Valley, largely due to the cheaper cost of living and highly educated talent. Other cities that have seen similar growth are Phoenix, Salt Lake City, and Nashville.

Yardi also reports that suburbia isn't the only place that's growing, though. Growth is easier in less dense areas, but distressed neighborhoods have benefits, as well. For example, Philadelphia's secondary urban areas have built 28 properties since 2008, adding more than 5.8 million square feet. Similarly, Chicago's West Loop neighborhood of Fulton Market has considerably gentrified in the last decade and seen 1.9 million square feet of office space added across 11 properties, almost doubling its office space from 2008. Many historic manufacturing buildings have been transformed into class A office spaces, such as the 210 North Green Street building that added 69,185 square feet, and 811 Fulton Market with 61,700 square feet of office space.

Chicago is also one of only a few markets to see substantial growth in its CBD. It added 10 properties and 7.8 million square feet of office space to the Loop and River North, including the 1.2 million-square-foot 150 North Riverside Plaza.

Manhattan and Los Angeles also added significant square footage to their CBDs. These iconic downtowns didn't grow by a large margin given their existing inventory. But the fact that Manhattan's Midtown and Financial Districts added 17.6 million square feet across 20 buildings in an extremely dense environment is impressive, nonetheless. Hudson Yards had completed two buildings by the end of 2018--10 and 55 Hudson Yards--totaling more than 3 million square feet.

Los Angeles' CBD hasn't seen quite the growth that Manhattan's has, adding just 1.2 million square feet across 16 properties. 365,000 square feet of that was added as part of the 1.3 million-square-foot Wilshire Grand Center which also includes retail space and a hotel. Most of the construction occurred down the hill from Grand Avenue. Seven of the nine primary properties are within one block of South Broadway along the periphery of the primary downtown area. Despite the modest growth, though, its future is bright. A total of 32 projects are either slated to start or are currently under construction and will add almost 6 million square feet to LA's downtown office footprint in the coming years.

LA's primary urban areas added the most square footage. They grew by 10% in the last decade, translating to the addition of 8.7 million square feet of office space. These areas encompass Hollywood, Culver City, Santa Monica, and the Jefferson Corridor in Marina Del Rey--easily the largest amount of office square footage in the region.

The San Francisco market--ranging from Menlo Park north to Santa Rosa--has seen decent growth. As a whole, the market grew by 12%, adding 17.7 million square feet in the last decade. A full one-quarter of that was added in the secondary urban neighborhoods of SOMA and Civic Center. In the CBD, the 387,000-square-foot 350 Bush Street building was the only property built since 2008. However, the primary urban areas surrounding the CBD grew by about 4 million square feet across nine properties, one of which was the 1.42-million-square-foot Salesforce Tower.

Conversely, the CBDs of Boston and San Diego haven't added any office space in 10 years. In San Diego, most of the expansion was in the primary suburban locations of Carlsbad, La Jolla, and University City. While in Boston, the neighborhood of Cambridge and the Seaport Innovation District added roughly 9 million square feet of office space in the last decade.

Both cities currently have a single property under construction though. Congress Square just added 247,486 square feet to Boston's downtown this year, and 120,000 square feet of office space at Kettner & Ash will be added to San Diego's, and both are projected to be completed this year, concludes Yardi. 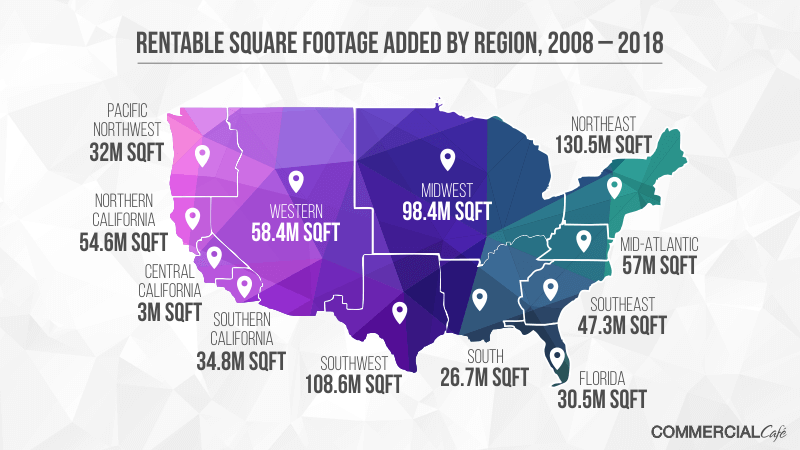