According to 2 new reports released jointly today by the Mortgage Bankers Association, delinquency rates of mortgages backed by commercial and multifamily properties reveal the various impacts the COVID-19 pandemic has had on different types of commercial real estate.

The findings come from MBA's new Commercial Real Estate Finance (CREF) Loan Performance Survey for August, and the latest quarterly Commercial/Multifamily Delinquency Report for the second quarter of 2020. The CREF Loan Performance Survey was developed by MBA to better understand the ways the pandemic is - and is not - impacting commercial mortgage loan performance. MBA's regular quarterly analysis of commercial/multifamily delinquency rates is based on third-party numbers covering each of the major capital sources.

"The onset of the COVID-19 pandemic had a dramatic and immediate impact on lodging and retail properties, which flowed through to the mortgages backed by those properties and led to a spike in delinquency rates in April and May," said Jamie Woodwell, MBA's Vice President of Commercial Real Estate Research. "While delinquency rates for both hotel and retail properties have since stabilized - and even declined slightly in July and August for hotel-backed loans - they still remain elevated. Overall, the vast majority of the balance of loans backed by other major property types continues to perform well."

Added Woodwell, "The property-specific differences flow through to the major capital sources. The commercial mortgage-backed securities (CMBS) market, which has the greatest reliance on hotel and retail loans, has seen delinquency rates rise to record highs. Meanwhile, the delinquency rates for other capital sources has also increased, but not to the same degree, with many remaining closer to all-time lows than record highs." 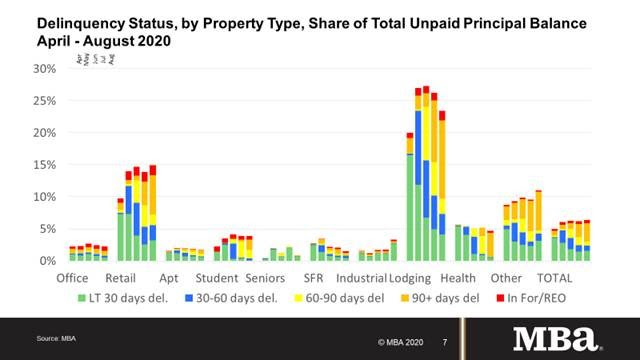