According to Cushman & Wakefield's newly released 'Winning in Growth Cities' report, New York attracted the most commercial real estate investment during the last year as the global real estate investment market saw volumes increase by 17.2% to $788 billion. While a number of cities still dominate, activity is spreading to an increased number of global markets as investors relax their risk tolerance.

New York saw $55.4 billion invested in the year to Q2 2014 - this equates to 7% of global market share.  London, which registered $47.3 billion of investment, closed the gap on New York thanks to a 40.5% increase in activity; it is also the largest global market for cross-border investors.  Tokyo ($35.5 billion) reclaims third position from Los Angeles ($33.1 billion) which drops into fourth, while San Francisco completes the top five ranked cities with $23.8 billion invested.


Cushman & Wakefield's International CEO, Carlo Barel di Sant'Albano said, "Competition, growth and change will bring forth more new global winners.  While gateway cities remain a primary focus for investors, interest in a broader spread of locations is increasingly apparent due to improved confidence and finance availability as well as a lack of supply in core cities.  Risk appetites have expanded in the US and buyers in Europe and Asia are following suit, particularly where local partners can be found. 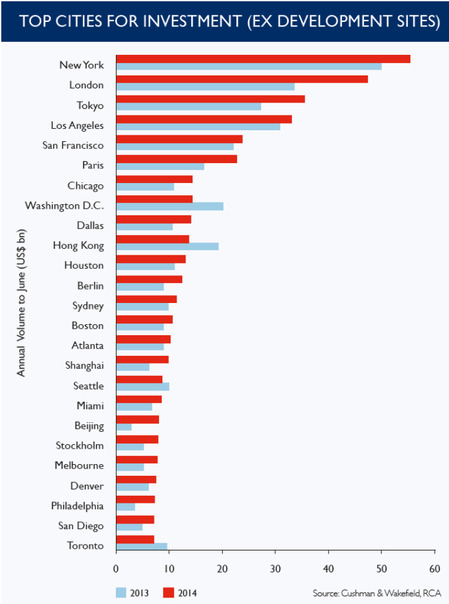 "Looking forward to 2015, the global economy is anticipated to be firmer but still vulnerable, with trends divergent country-by-country.  One of the most notable drivers for this will be the polarisation in monetary policy, which will be tightening in some areas but remaining loose elsewhere."

The top 10 cities for global investment changed little from last year, with the exception of Dallas moving into 9th at the expense of Houston (11th).  Shanghai, Beijing, Miami and Stockholm join the top 20, while Toronto, Singapore, Moscow and Seoul fall out.  Dubai and Dublin saw significant change and leaped into the top 50 from 186th and 82nd position respectively.  Top cities continue to be popular across multiple sectors with New York top in retail, multifamily and hospitality, London top for offices, Los Angeles top for industrial and Tokyo a top five market in retail, office and industrial.

The report also states competition to buy will continue to push up prices, with prime yields down 13bp globally to 7% last year and likely to at least match this in the year ahead.

Cross-border investment rose by 38.8% last year compared to an 11.3% growth in domestic spending, as international investors once again increased their market share.  While Europe remains the biggest area for foreign investment, it saw a 35% growth in cross-border buying last year, growth has actually been more rapid in the Americas (46%) and Asia (43%), underlining the truly global nature of the marketplace.

London remains by far the most favoured market with a 14.1% share versus 5.5% for Paris and 4.9% for New York. Overall, 13 of the top 30 are in EMEA, nine are in Asia, seven in North America and one in Latin America. The fastest growth was in Beijing, rising from 46th to 17th place, followed by Boston, Amsterdam, Madrid and Sao Paulo. 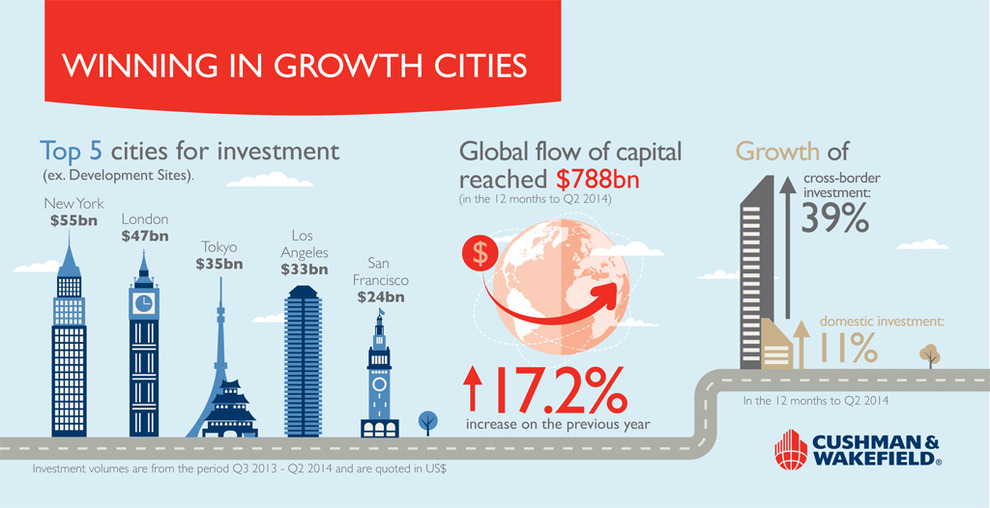 The biggest source of cross-border capital was the Americas, with $75.3 billion invested non-domestically, while Europeans are the number two international buyer but a significant share of this is targeted within the region.  American investors were the strongest players outside their own region last year, with $58.7bn invested, 48% of the global total.

The fastest growing stream of international investment however has been Asian capital flowing out of the region.  Asian global investment rose 56% last year compared to a 54% increase by American investors, 26% by Europeans and 13% by Middle Eastern and African players. 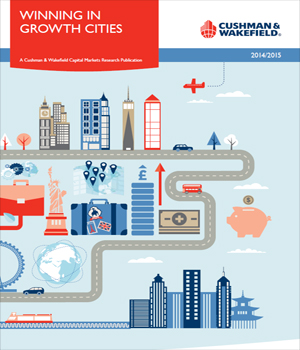 Typically, Asian players cross borders easily but much in the past has been within their own region. That has changed dramatically in recent years as Asian businesses have diversified abroad, focusing initially on gateway cities in the US and the UK but now spreading their net more widely, says the report.

David Hutchings, Head of EMEA Investment Strategy, said: "Core markets still offer attractive returns for core investors but those seeking higher returns are having to take on risk either in core markets or by targeting quality assets in second-tier locations. However, caution is needed as real estate usage is evolving as tenants adjust to new technology, new working practices and demographic change."

Activity in North America rose 14.3% in the year to June, strongly driven by foreign players who pushed activity up by nearly 47% and increased their market share from 8.8% to 11.3%.

In the US, foreign investment rose 43%, driven by Canadian, Chinese and Australian buyers.

Carlo Barel di Sant'Albano added: "With better signs emerging in the US that the economic recovery is picking up and much of the increased investment to date driven by higher pension fund allocations and growing international demand from high net worth investors, in both cases notably from Asia, the relative strength of foreign demand in the US is likely to escalate further in the year ahead."

North American yields have continued to compress and the process has spread to second tier markets as investor confidence and finance availability have improved.

In Latin America, investor confidence has been subdued by weaker economic growth and not helped by rising vacancy where development has added to stock. However, while investment fell 1.2% last year, this was driven by a 19.5% fall in domestic activity. Foreign demand actually picked up by 38.6%, giving non-domestic buyers a 44% share. The region's main markets, Mexico City and Sao Paulo, both saw investment fall but growth in smaller 'Tier 2' markets in Mexico as well as cities such as Santiago helped balance this out.

Investor demand in Asia remains strong and liquidity is high as real estate allocations from pension funds and insurance companies continue to rise. However, the pace of activity has been held back, partly by economic uncertainty but also by a tightening in lending conditions in some markets.

Overall trading rose at a below par rate of 5.5% in the year to June as a result, with domestic buyers cutting spending by 3%. By contrast many international investors are rediscovering their interest in the region, with foreign buying up 43%.  The most active international players are regional, led by Hong Kong, Singapore and China, but US investors are number two, Canadians are highly active and UK and German investors are also in the top 10.

John Stinson, Head of Asia Pacific Capital Markets at Cushman & Wakefield, said: "Core Asian markets are generally outperforming.  However, an  expectation of relatively low growth returns for the next three to five years  is encouraging large Asia domicile funds and investors to re-weight from some core markets and redeploy in emerging markets or increase allocation to the US or Europe.  Early next year more robust growth in the Asia core markets will re-attract capital while reforms in China, India and Japan will continue to build global investor confidence bringing increased capital flows."

EMEA saw a 30% increase in volumes in the year to June, with strong domestic demand (up 26%) but foreign investment key, rising overall by 35%. As demand and pricing increased, interest has spread further to new markets, with southern Europe and Spain most in focus but interest also is up in Tier 2 cities in the UK and German  and quality stock in most markets finding a ready buyer and better finance.

Cushman & Wakefield's Head of EMEA Capital Markets, Jan-Willem Bastijn reports, "Europe's moment in the sun will continue, driven by the key ingredients of relative safety, a promise of recovery and improving availability of stock as banking and company restructuring continues.  The explosion of the tech scene in many European cities, notably London, has also underpinned expectations of a better occupational market."

Economic performance has been better than the previous year but still subdued overall and volatile quarter by quarter and market by market. The UK and Sweden are among the better performers but a number of previously stressed peripheral markets are now recovering, led by Ireland and Spain. A key ingredient of this recovery and its translation to property meanwhile is an improvement in corporate confidence which is pushing investment and occupier demand, with a focus on modern space and new working and retailing practices.