New Yorkers and visitors are now able to visit for the first time the Public Square and Gardens, a new five-acre public space; its centerpiece, an interactive landmark temporarily known as Vessel; and The Shops & Restaurants, a one-million-square-foot retail center featuring a collection of more than 100 diverse shops and culinary experiences. Tenants have begun moving into 55 Hudson Yards and 30 Hudson Yards, two large-scale commercial towers, and residential occupancy is underway at 15 Hudson Yards. 10 Hudson Yards opened in May of 2016.

The opening of Hudson Yards, built atop the MTA's John D. Caemmerer West Side Storage Yard, brings together for the first time the West Side and the neighboring districts of Chelsea and Hell's Kitchen. 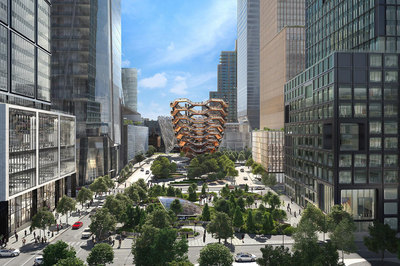 Live performances by singer and songwriter Andra Day, Dancers of The Ailey School and the National Chorale, The Professional Performing Arts High School Choir, marked the extraordinary occasion. One hundred notable New Yorkers, from civic leaders to Broadway stars, sports icons to fashion designers, media personalities to artists, cultural principals to chefs, corporate heads and crowd favorite Big Bird, gathered in the Public Square and Gardens to walk Vessel's 2,500 steps for the first time. Attendees participated in inaugural walks up Vessel, the neighborhood's centerpiece designed by Thomas Heatherwick and Heatherwick Studio. A ribbon-cutting and photo-op at The Shops & Restaurants followed with development executives and retail and restaurant partners.

"There are three main reasons why I have long supported developing the vast underused space on Manhattan's far West Side -- and connecting it to all else via the extension of the 7 train: jobs, jobs, jobs. Jobs for New Yorkers in every borough, and at every rung of the economic ladder. New York is a bold, future-focused city. And the work done here by Steve Ross, Related, the City, the building trades unions, the MTA and others will contribute to the economic energy, optimism and vitality that will keep New York growing and creating -- and at the forefront of global cities -- for a long time to come," said U.S. Senator Charles E. Schumer.

Governor Cuomo said, "The development of Hudson Yards has transformed the West Side of Manhattan, creating jobs and economic opportunity for New Yorkers. With the building of a new Pennsylvania Station-Moynihan Farley complex, we are going to connect this emerging neighborhood to a world-class 21st century transportation hub. Today marks our continued commitment toward building an even more sustainable City and region, and we are proud to be creating a stronger future for our state.‎"

Congressman Jerrold Nadler said, "This is truly a historic day in New York City, it is not every day that you get to open a brand new neighborhood in Manhattan. The one word that best describes Hudson Yards is 'transformative.' This project is not a stand-alone development - it is the creation of a new, mixed use neighborhood, including public parks, cultural institutions, affordable housing, and thousands of jobs. As this project has created much-needed links between Chelsea, Clinton and Hell's Kitchen, it has, thankfully, become easy to forget how disruptive the West Side Yards were to our urban fabric. I congratulate the many partners that have made this revitalization of the West Side possible." 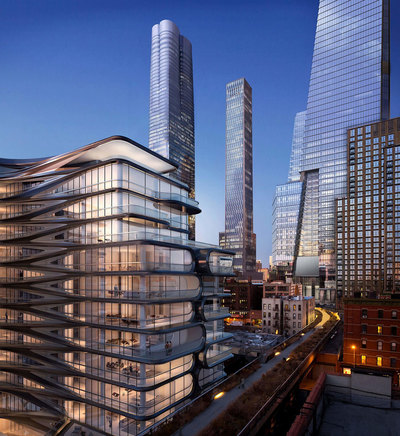 Mayor Bill de Blasio said, "In New York City, we make the impossible reality - including building new neighborhoods over old railyards. Hudson Yards is bringing thousands of jobs, new green space, and expanded transportation to the West Side. The project is an example of the ingenuity that helps make New York the greatest city in the world."

Stephen M. Ross, Chairman of Related Companies said, "Building Hudson Yards is the most humbling experience of my lifetime. It's a rare opportunity to be able to create a neighborhood of this size and impact, let alone in New York City. Hudson Yards' economic impact is already profound and its place on the New York skyline is meaningful. Bringing this vision to life took incredible forethought and commitment from the public sector, and a world-class team and set of partners in the private sector, many of whom signed on to bring their businesses to our budding community when it was still just an open railyard. This new neighborhood represents more than just a set of buildings, it shows what can be achieved when the public and private sectors join together to unleash passion and creativity. Our ambition for Hudson Yards was to create a great neighborhood, with experiences and opportunities for everyone. I am confident that we have achieved this with great public spaces, shopping and culinary expressions across all spectrums, cultural attractions, diverse residential opportunities and cutting-edge sustainability and resiliency. We are thrilled to now welcome every New Yorker, indeed the world, to visit New York's newest neighborhood, Hudson Yards."

Blake Hutcheson, Chair of Oxford Properties Group and President of OMERS said, "Today we celebrate the transformation of vision into reality with the opening of New York's newest neighborhood, Hudson Yards. This neighborhood brings the community together with incredible art, architecture, public space and built form. We are proud of how far we have come in creating this great place, and excited to see it continue to grow and evolve with the spirit and energy of New York City and New Yorkers."

A model for the 21st-century urban experience, Hudson Yards is an unprecedented mix of buildings, parks, utilities and public spaces that combine to form a connected, responsive, clean, reliable and efficient neighborhood. Planned as the first LEED certified neighborhood, Hudson Yards is home to a first-of-it-kind microgrid and two cogeneration plants that will save 24,000 MT of CO2e greenhouse gases from being emitted annually by generating electricity and hot and chilled water for the neighborhood--more than twice as efficiently as conventional energy sources.

Additionally, nearly 10 million gallons of storm water will be collected from building roofs and public plazas, then filtered and reused in mechanical and irrigation systems. The development of Hudson Yards also provides for over 1,300 new or permanently preserved affordable units onsite and in the neighborhood, 14 acres of public space and a new K-8 public school.

Hudson Yards is an economic engine for New York City, already contributing more than $10 billion to the City's GDP during construction and serving as a significant source of revenue to the MTA. It is expected to pay the MTA $2.36 billion during construction and $66 million annually. It will also pay almost $100 million per year in tax revenue that will be available for debt service on the bonds issued for the No. 7 Subway line extension -- a truly successful public/private partnership. Once fully developed, Hudson Yards will contribute nearly $19 billion annually to New York City's Gross Domestic Product (GDP), and nearly $1 billion annually in State and City taxes. The companies and buildings at Hudson Yards will bring over 57,000 jobs to the new West Side neighborhood and Hudson Yards also estimates that, over the next six months, upwards of 600 new jobs will be filled by the developers and management team to provide essential services at the development, most of whom will be represented by SEIU 32BJ, plus thousands of additional jobs at restaurants and other campus businesses.

The City's goal to transform the broader 42-block Hudson Yards District from a largely vacant, underdeveloped area into a vibrant mixed-use neighborhood of workers, residents and visitors is  also being achieved ahead of projections, with over 30 million square feet of new development completed or in construction since the rezoning in 2005. The $3.5 billion infrastructure investment that the City made, or has committed to fund, through the Hudson Yards Infrastructure Corporation (HYIC) bonds is paying off as the essential first step to attract vast private investment in the District that otherwise would not have occurred. It is now estimated that future revenues from the District will not only pay off the bonds that funded the subway extension, but will generate more than $21 billion in net revenues to the City, creating an enormous new revenue stream to fund future services. Additional benefits to the City include over 3,000 new affordable housing units accounting for 28% of all new housing in the district.

Additional details about the Grand Opening

Throughout the week, New Yorkers are invited to opening celebrations with numerous public performances including presentations from the Dancers of The Ailey School; the Haiku Guys, poets that create complimentary Haiku's on any topic; Taro's Origami, intricate and unique origami mementos; Caricature Artist A.E. Kieren, an undercover illustrator creating candid sketches in the moment; The D.R.E.A.M. Ring, a community-oriented dance company performing the Brooklyn-born street dance style Flexn; Silhouettes by Cindi, live creation of unique paper silhouette mementos; in addition to various DJ's playing throughout the weekend.

The Public Square and Gardens, one of the signature spaces at Hudson Yards, containing five acres of public plazas, gardens and groves designed by Nelson Byrd Woltz Landscape Architects in collaboration with Heatherwick Studio. The new park space seamlessly connects to the High Line, Hudson Park & Boulevard and Bella Abzug Park, creating a continuous chain of open spaces on the West Side from Gansevoort Street to Times Square, making it the largest network of public spaces developed in Manhattan since Central Park. The Public Square and Gardens is one segment of the 14 acres of open space at Hudson Yards.

Vessel, the centerpiece of the Hudson Yards Public Square and Gardens, and the City's new urban landmark designed by Thomas Heatherwick and Heatherwick Studio. Comprised of 154 intricately-interconnecting flights of stairs, 2,500 individual steps and 80 landings, Vessel offers the public a one-mile vertical climbing experience and some of the most unique views of Manhattan's West Side. Free entrance with timed ticketing details are now available at www.hudsonyardsnewyork.com/discover/staircase. Those who have experienced the structure will be encouraged to submit ideas for a permanent name from their mobile devices as they exit Vessel

The Shops & Restaurants, New York City's premier shopping and dining destination located at 20 Hudson Yards. The one-million-square-foot retail center brings together an unparalleled collection of shopping and dining experiences found nowhere else in New York, including offerings from leading brands in every category from luxury to fast fashion, first stores from many digitally native brands and imaginative cultural exhibitions. The culinary collection offers comprehensive and complementary experiences for morning, noon and night, across all food types and price points.