According to Yardi Matrix and Property Shark, the Manhattan office market seems to be picking up steam as 2017 advances.

The average price per square foot for office buildings trading in the borough is once again on the rise, even though the year's second quarter failed to reach previous Q2 levels in terms of total sales volume. No major office projects came online in the quarter, but various large developments are in the pipeline for Q3 and are likely to draw investor interest over the coming months.

The year started off slow, with a total of nine major office deals closing in Q1 in Manhattan for a total of $2 billion. Yet while the market seems to have picked up the pace in the second quarter, it still lags previous years' numbers. Office sales volume dropped 57% year-over-year in Q2, and was 45% below Q2 2015 levels, though such fluctuation is not unusual and the previous couple of years were somewhat of an anomaly. After reaching new heights in terms of sale prices in 2015, the Manhattan sales market might just be returning to a more sustainable level.

The Manhattan office market saw seven deals close in the year's second quarter, totaling $3.8 billion in sales volume. Despite the year-over-year drop, Yardi Matrix and PropertyShark data points to an 89% increase in total sales volume from Q1 to Q2 2017, signaling that the tides might be turning and the market might build up in the following months.

The average price per square foot for a Manhattan office property increased 6% year-over-year in Q2 2017, from $978 to $1,037. Prices are nearing the high point recorded in Q1 2016, when the market peaked and trophy office assets in the borough traded at an average of $1,212 per square foot.

Furthermore, the average price in Q2 rose nearly 40% compared to the year's first quarter, when it rested at $743. This growth can be partly attributed to the $2.2 billion sale of 245 Park Ave in May 2017, which pushed average prices higher. After a sluggish start in Q1, buyer interest is piqued again, and Manhattan remains the most desirable and expensive office market in the country. 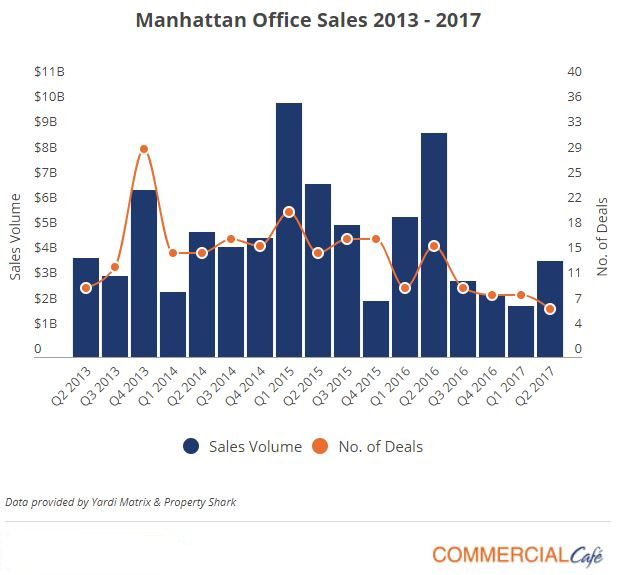 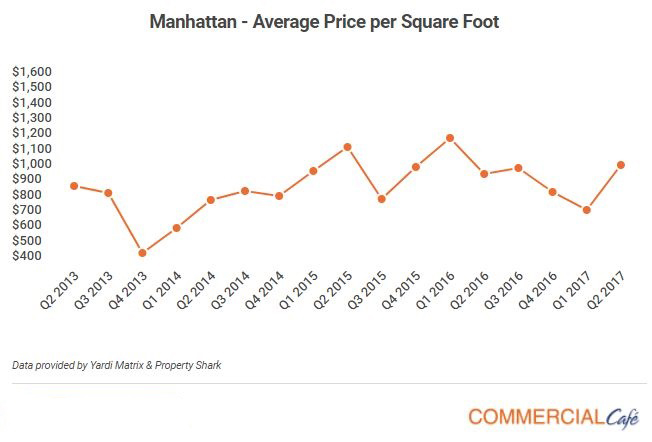