Higher levels of liquidity, tighter credit spreads and a modest loosening of underwriting standards contributed to a sharp improvement in commercial real estate lending momentum in Q4 2020, according to the latest research from CBRE.

The CBRE Lending Momentum Index, which tracks the pace of commercial loan closings in the U.S., reached a value of 221 in December, up by 38.2% from September. As of December 2020, however, the index was still down 16% from a year ago.

CBRE's lender survey indicates that the composition of the non-government agency commercial real estate lending market in Q4 2020 resembled the more balanced conditions that existed pre-pandemic. There was strong participation from alternative lenders for bridge loans and life companies for stabilized low-leverage loans in Q4 2020. The government agencies also had stellar production, which provided high levels of liquidity to the multifamily market.

Alternative lenders, which include debt funds, finance companies and mortgage REITS, captured the highest share (36%) of non-agency loan closing volume in Q4 2020. Alternative lenders were the leading source of bridge loans to the multifamily, retail and office sectors.

Regional banks continued to play an important role in commercial mortgage markets at year-end, accounting for 23.7% of originations in Q4 2020, down only slightly from year earlier levels. In addition to permanent loans, banks provided construction financing, primarily for multifamily and industrial projects. 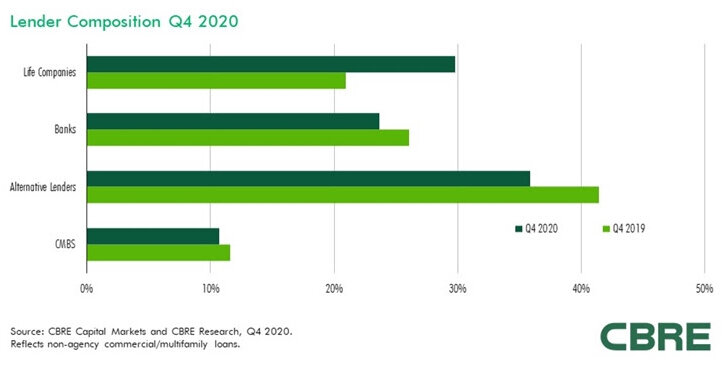