According to the recently released Q4 2016 Zillow Breakeven Horizon report, U.S. home value appreciation is expected to slow in some of the nation's most expensive markets, and as a result, it now takes longer to break even on a home in those markets compared to renting it. Nationally, buying a home becomes a better financial decision than renting it in just under two years.

When home values grow quickly, home equity also accumulates faster, helping to offset and eventually recoup the large upfront costs of buying a home more quickly. But home value appreciation is slowing down in some places, especially expensive areas like Silicon Valley and the San Francisco Bay Area. This makes building home equity a slower process, and the Breakeven Horizons in both the San Jose and San Francisco metros are nearly two years and 1.5 years longer, respectively, than they were the year before. No other major metros saw the Breakeven Horizon grow as much in a single year.

Home value appreciation isn't slowing everywhere. Home values in the Washington metro, for example, are expected to grow at a faster pace over the next year after staying largely flat recently, leading to a shorter Breakeven Horizon. Buyers in this area can now expect to break even after 3.5 years.

Overall, U.S. home value growth accelerated at the end of 2016, ending the year at a 6.8 percent annual appreciation rate. At the same time, rent appreciation slowed significantly, only growing at 1.5 percent annually. These shifting dynamics can make the question of whether to buy or rent less clear in many markets.

"There are many factors that go into the decision on whether to rent or buy," said Zillow Chief Economist Dr. Svenja Gudell. "Zillow's Breakeven Horizon can help people better understand the longer-term financial calculation. It's also helpful for buyers to understand that as home value appreciation moderates, it will take them longer to break even than in past years.  San Jose buyers, for example, will have to stay in a home for at least five years to offset the high upfront costs necessary to make that purchase."

Among the biggest U.S. metros, it takes the longest to break even on a home purchase in large California markets. In San Jose, San Francisco, Los Angeles and San Diego, the Breakeven Horizon is at least four years.

Buyers will break even fastest in the South and Midwest. In Indianapolis, Orlando, Detroit, Atlanta, and Tampa, it takes less than 1.5 years to break even on a home. 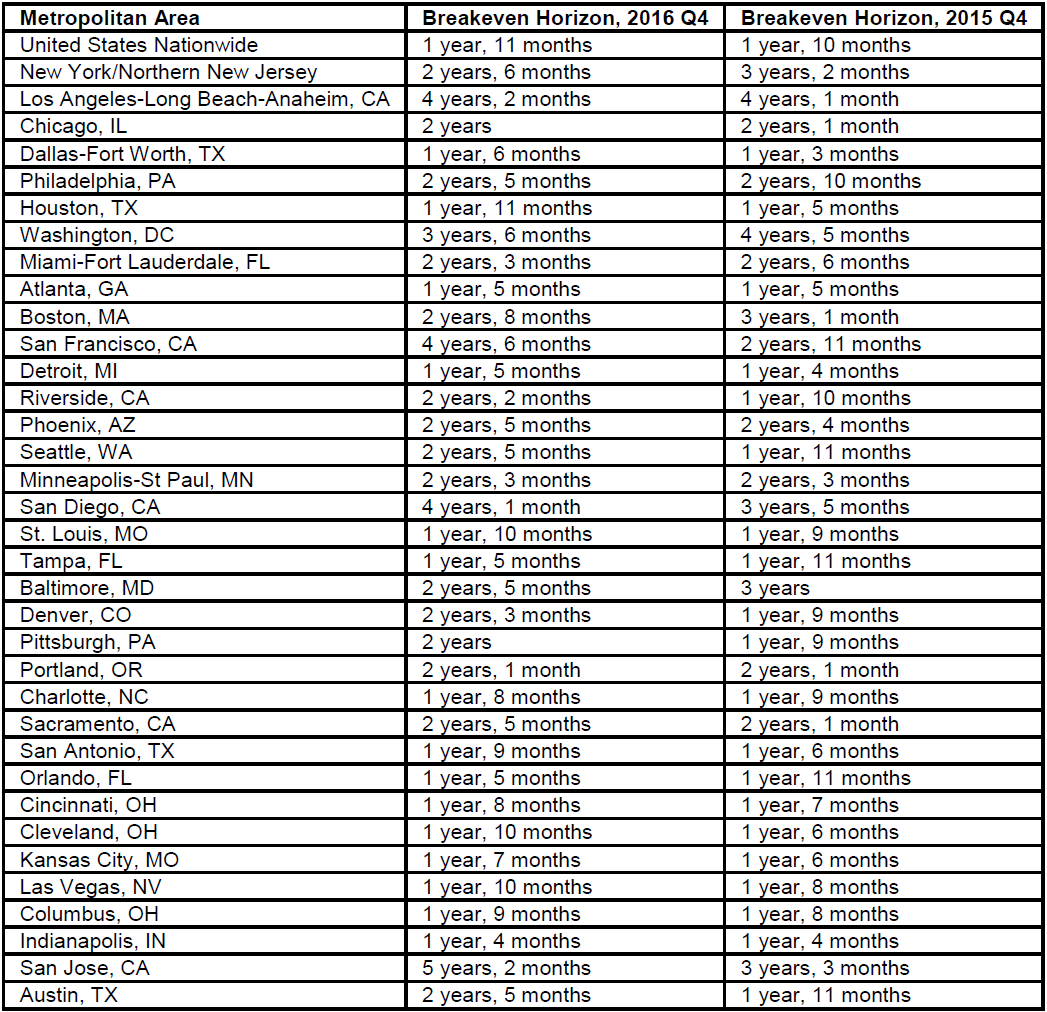