Overall, big markets continue to produce the largest volumes of jobs and tech degree graduates, with the San Francisco Bay Area, Toronto and New York City adding the most tech jobs in the past five years. But several years of low unemployment rates have dampened the momentum of many leading tech talent markets; Fifteen of the top 50 markets in CBRE's report registered an accelerated, two-year pace of tech job growth, down from 23 last year.

Partly as a result, smaller markets outside of CBRE's top 50 have absorbed some tech-labor demand. For the first time, CBRE's report includes a list of fast-growing "opportunity markets," led by Tucson with a 90 percent increase in tech jobs over five years, Hamilton, Ont.'s 52 percent gain, Waterloo's 40 percent gain and Las Vegas' 35 percent gain.

The Bay Area and Seattle remain the two highest rated tech talent markets, respectively, and Toronto climbed one spot to No. 3 overall. Washington, D.C., and New York City - the top two regions for producing tech-degree graduates - round out the top five.
CBRE's separate list of "momentum markets" that most accelerated their tech talent employment growth is led by Orlando with a 14.1 percentage point increase in growth rate, San Diego (+10.2) and Chicago (+8.0). 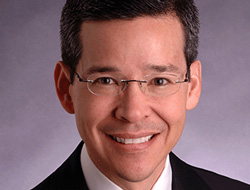 Ultimately, national momentum in tech talent expansion can be influenced at least partly by growth in smaller "opportunity markets" outside of CBRE's top 50. Many like Des Moines, Iowa, and Louisville, Ky., generated double-digit percentage gains in tech talent employment and wage growth over the past five years.

"The tech talent labor pool in the U.S. grew by 16 percent in the past five years, compared with 9 percent for the U.S. overall. That type of growth can deplete even the deepest pools of qualified labor," said Colin Yasukochi, Director of Research and Analysis for CBRE and co-author of the report. "Many of the opportunity markets offer quality labor pools that are untapped and have high growth potential. These markets can be ideal for small-scale operations, start-ups and tech jobs with non-tech employers like banks, media and services firms that comprise nearly two thirds of the tech labor pool."

CBRE ranks markets on its Tech Talent Scorecard based on 13 unique metrics, including tech talent supply, concentration, cost, completed tech degrees, industry outlook for job growth, and market outlook for both office- and apartment-rent cost growth. The top cities in this year's scorecard are all large markets with a tech labor pool of more than 50,000 people each.

Several markets climbed multiple spots in the rankings to land just outside the top 10 based on their gains across multiple categories. Madison, Wisc., rose 10 spots to No. 25 and Vancouver rose 12 spots to No. 12, each boosted at least partly by their tech-centric universities. Similarly, Salt Lake City climbed seven spots to No. 15 and Portland, Ore., rose five spots to No. 16 due to migration and tech-company expansions. 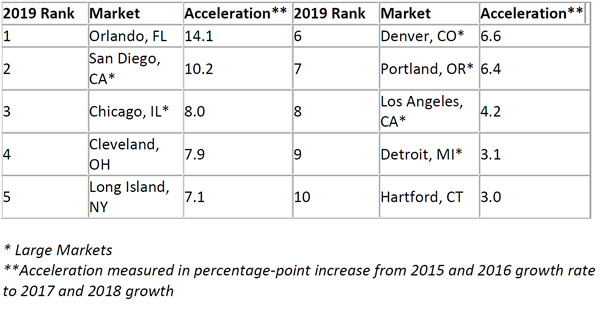 Another factor in job growth for tech talent hubs: People in their 20s. CBRE's research indicates that the size and growth of these populations - specifically, people between 20 and 29 years of age in CBRE's analysis - has an indirect correlation to a market's tech talent base; Populations of 20-somethings in seven of CBRE's 10 momentum markets grew faster than the national average rate from 2012 to 2017.

The high-tech industry accounted for 20 percent of major office-leasing activity in this year's first quarter, the most of any industry. The tech industry's growth has left little available office space in large or small markets, with vacancy in single-digit percentages in the tightest markets, such as 4.6 percent in Madison, Wis., 4.7 percent in Vancouver, 5.9 percent in Charlotte, and 6.1 percent in the San Francisco Bay Area. That scarcity of available space has pushed up rents, especially in large markets. For example, the office lease rate in Orange County, Calif., has increased by 50 percent over the past five years.

CBRE assessed the relative affordability of markets for employers by weighing both wages and office rents. Specifically, CBRE calculated those two combined costs for a hypothetical 500-employee tech firm occupying 75,000 sq. ft. in each market. The San Francisco Bay Area ranked as the most expensive at $59.7 million annually. The least expensive of the top 50: Montreal at $28.6 million annually.

Also of consideration are residential costs. CBRE's analysis of each market's average tech wages to its average apartment rental cost revealed which markets require tech talent to pay the largest percentage of its income on rent: New York City at 43.6 percent, Long Island at 28.4 percent and the San Francisco Bay Area at 26.4 percent. The lowest ratios are found in the Midwest and parts of Canada, including 11.9 percent in Columbus, 12.2 percent in St. Louis and 12.6 percent in Montreal.

"For tech employers, selecting an office location requires a series of tradeoffs," Mr. Yasukochi said. "Many will pay higher rental rates and wages to ensure access to high quality talent and close proximity to certain universities and complementary companies. Many will find good talent in less expensive markets to allow their enterprise to grow nationally. Cost, education levels, tech clustering, demographics and other influences all factor into that calculation for each company."