According to the National Association of Realtors, existing-home sales took off in March 2017 to their highest pace in over 10 years, and severe supply shortages resulted in the typical home coming off the market significantly faster than in February and a year ago. Only the West saw a decline in sales activity in March.

Total existing-home sales, which are completed transactions that include single-family homes, townhomes, condominiums and co-ops, ascended 4.4 percent to a seasonally adjusted annual rate of 5.71 million in March from a downwardly revised 5.47 million in February. March's sales pace is 5.9 percent above a year ago and surpasses January as the strongest month of sales since February 2007 (5.79 million).

Lawrence Yun, NAR chief economist, says existing sales roared back in March and were led by hefty gains in the Northeast and Midwest. "The early returns so far this spring buying season look very promising as a rising number of households dipped their toes into the market and were successfully able to close on a home last month," he said. "Although finding available properties to buy continues to be a strenuous task for many buyers, there was enough of a monthly increase in listings in March for sales to muster a strong gain. Sales will go up as long as inventory does."

Total housing inventory at the end of March increased 5.8 percent to 1.83 million existing homes available for sale, but is still 6.6 percent lower than a year ago (1.96 million) and has fallen year-over-year for 22 straight months. Unsold inventory is at a 3.8-month supply at the current sales pace (unchanged from February).

Added Yun, "Bolstered by strong consumer confidence and underlying demand, home sales are up convincingly from a year ago nationally and in all four major regions despite the fact that buying a home has gotten more expensive over the past year."

Inventory data from Realtor.com reveals that the metropolitan statistical areas where listings stayed on the market the shortest amount of time in March were San Jose-Sunnyvale-Santa Clara, Calif., 24 days; San Francisco-Oakland-Hayward, Calif., 25 days; Seattle-Tacoma-Bellevue, Wash., and Denver-Aurora-Lakewood, Colo., both at 28 days; and Vallejo-Fairfield, Calif., 31 days.

"Last month's swift price gains and the remarkably short time a home was on the market are directly the result of the homebuilding industry's struggle to meet the dire need for more new homes," said Yun. "A growing pool of all types of buyers is competing for the lackluster amount of existing homes on the market. Until we see significant and sustained multi-month increases in housing starts, prices will continue to far outpace incomes and put pressure on those trying to buy."

First-time buyers were 32 percent of sales in March, which is unchanged from February and up from 30 percent a year ago. NAR's 2016 Profile of Home Buyers and Sellers - released in late 2016 - revealed that the annual share of first-time buyers was 35 percent.

Single-family home sales climbed 4.3 percent to a seasonally adjusted annual rate of 5.08 million in March from 4.87 million in February, and are now 6.1 percent above the 4.79 million pace a year ago. The median existing single-family home price was $237,800 in March, up 6.6 percent from March 2016. 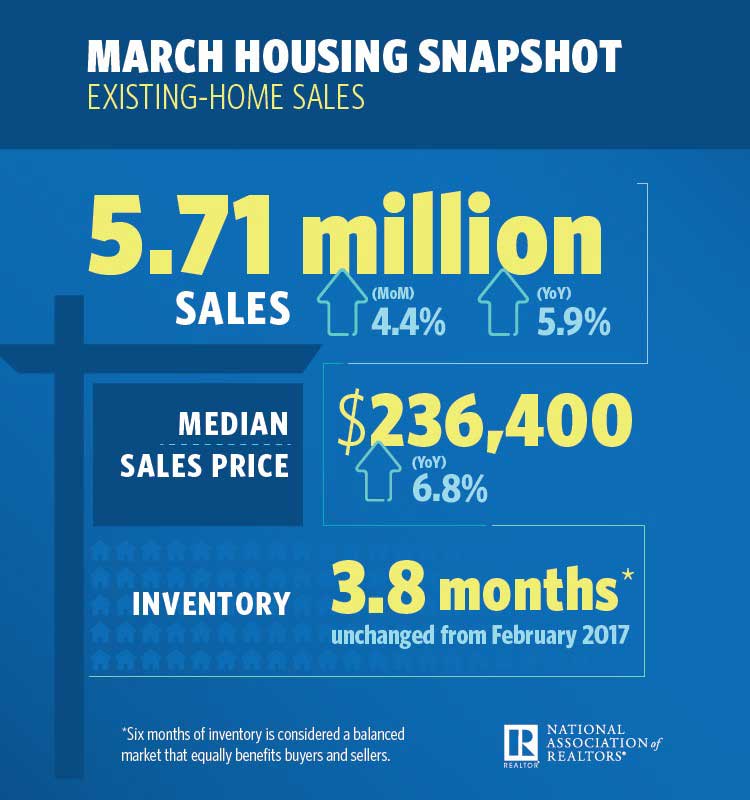