According to ATTOM Data Solutions' Year-End 2019 U.S. Home Sales Report, home sellers nationwide in 2019 realized a home price gain of $65,500 on the typical sale, up from $58,100 last year and up from $50,027 two years ago. The latest profit figure, based on median purchase and resale prices, marked the highest level in the United States since 2006 - a 13-year high.
That $65,500 typical home seller profit represented a 34 percent return on investment compared to the original purchase price, up from 31.4 percent last year and up from 27.4 percent in 2017, to the highest average home-seller ROI since 2006.

Both raw profits and ROI have improved nationwide for eight straight years. However, last year's gain in ROI - up less than three percentage points - was the smallest since 2011.

"The nation's housing boom kept roaring along in 2019 as prices hit a new record, returning ever-higher profits to home sellers and posing ever-greater challenges for buyers seeking bargains. In short, it was a great year to be a seller," said Todd Teta, chief product officer at ATTOM Data Solutions. "But there were signs that the market was losing some steam last year, as profits and profit margins increased at the slowest pace since 2011. While low mortgage rates are propping up prices, the declining progress suggests some uncertainty going into the 2020 buying season."

Among 220 metropolitan statistical areas with a population greater than 200,000 and sufficient historical sales data, those in western states continued to reap the highest returns on investments, with concentrations on or near the west coast. Metro areas with the highest home seller ROIs were in San Jose, CA (82.8 percent); San Francisco, CA (72.8 percent); Seattle, WA (65.6 percent); Merced, CA (63.2 percent) and Salem, OR (62.1 percent). The top four in 2019 were the same areas that topped the list in 2018.

Along with Salt Lake City, other major metro areas with a population of at least 1 million and at least an 8 percent annual increase in home prices in 2019 were Grand Rapids, MI (up 8.9 percent) and Columbus, OH (up 8.3 percent).

Home prices in 2019 reached new peaks in 105 of the 134 metros (78 percent), including Los Angeles, Dallas-Fort Worth, Houston, Washington, D.C., and Philadelphia.

Homeownership tenure at new record high nationwide, but down in many areas

A quarter of home buyers made all-cash purchases in 2019

Among 166 metropolitan statistical areas with a population of at least 200,000 and sufficient cash-sales data, those where cash sales represented the largest share of all transactions in 2019 were Macon, GA (51.1 percent of sales); Naples, FL (50.4 percent); Chico, CA (47.9 percent); Montgomery, AL (44.7 percent) and Fort Smith, OK (43.8 percent).
U.S. distressed sales share drops to 13-year low, but rises in eight states
Distressed home sales -- including bank-owned (REO) sales, third-party foreclosure auction sales, and short sales -- accounted for 11.5 percent of all U.S. single family home and condo sales in 2019, down from 12.4 percent in 2018 and from a peak of 38.8 percent in 2011. The latest figure marked the lowest point since 2006.

States where distressed sales comprised the largest portion of total sales in 2019 were all in the Northeast or Mid-Atlantic regions: New Jersey (20.1 percent of sales), Connecticut (19.5 percent), Delaware (19.4 percent), Maryland (18.1 percent) and Rhode Island (17.6 percent).

Aside from San Francisco and Salt Lake City, metros with at least 1 million people that had the lowest shares, were San Jose, CA (5.2 percent of sales); Austin, TX (5.7 percent) and Grand Rapids, MI (6.2 percent).

Institutional investors nationwide accounted for 2.9 percent of all single-family home and condo sales in 2019, down from 3.0 percent in 2018 to the lowest point since 2015.

Among 120 metropolitan statistical areas with a population of at least 200,000 and sufficient institutional-investor sales data, those with the highest levels of institutional-investor transactions in 2019 were Atlanta, GA (9.5 percent of sales); Charlotte, NC (8.6 percent); Lafayette, LA (8.4 percent); Memphis, TN (8.3 percent) and Raleigh, NC (7.8 percent).

Nationwide, buyers using Federal Housing Administration (FHA) loans accounted for 11.9 percent of all single-family home and condo purchases in 2019, up from 10.6 percent in 2018. The increase marked the first rise since 2015.

Among 197 metropolitan statistical areas with a population of at least 200,000 and sufficient FHA- buyer data, the top four with the highest share of purchases made with FHA loans were in Texas. Those with the highest levels of FHA buyers in 2019 were McAllen, TX (30.4 percent of sales); El Paso, TX (26 percent); Amarillo, TX (24.4 percent); Beaumont-Port Arthur, TX (23.7 percent) and Visalia, CA (23.5 percent). The four Texas metros were the same that led the list in 2018. 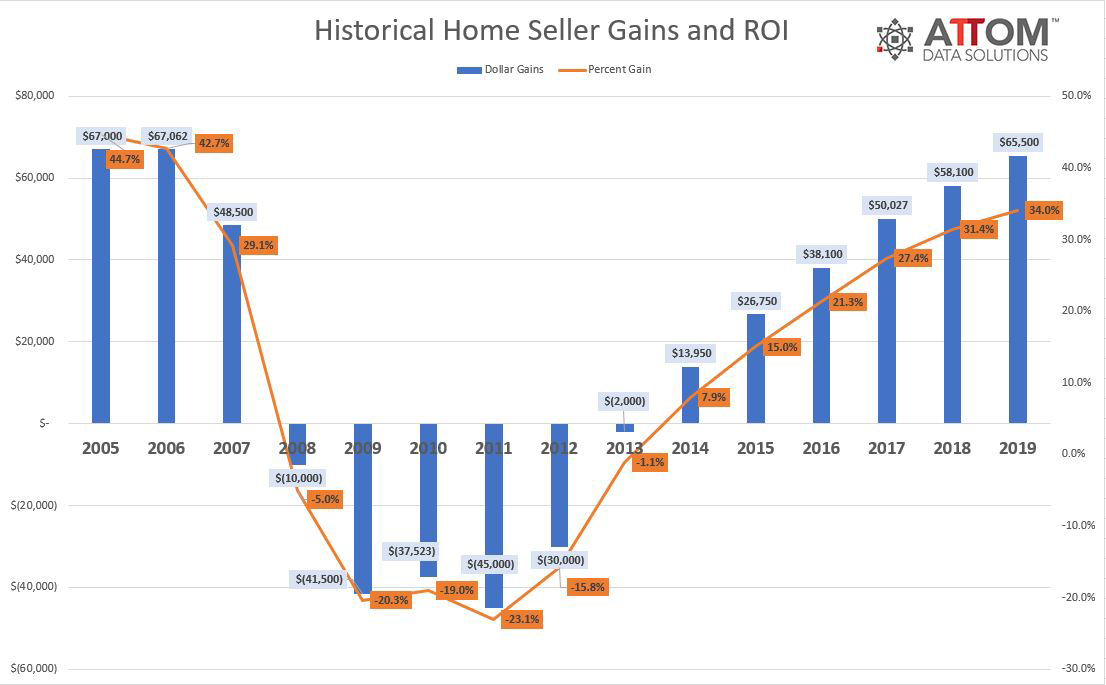