According CBRE, Asian investors are on track to spend more on U.S. multifamily assets in 2014 than at any other point in history.

Top Targets for Asian Investors:
U.S. multifamily has seen a significant increase in investment volumes by Asian buyers so far in 2014, with $522 million of transactions completed from January through August. This figure has already surpassed the full year total for 2012 ($356 million) by a considerable margin and is close to bettering the 2013 total ($537 million).

The jump in buying activity by Asian investors, particularly from Japan and China, is the most significant shift in terms of buyer nationality in 2014. Asian investors are now responsible for 18% of cross-regional multifamily investment in the US--an increase of 8%--as purchases by European and Middle Eastern countries decline slightly. Canada continues to be the overall leader in foreign multifamily investment into the US.

Since January 2013, Asian buyers have targeted a range of multifamily assets in US locations, with San Francisco attracting the most investment at more than $326 million, followed by Los Angeles at $252 million and New York at $175 million. Asian investors have been focused on single assets with just one of the 27 multifamily acquisitions in this time period a portfolio, compared to investors from the rest of the world who made at least 20% of their acquisitions in portfolio assets.

Marc Giuffrida, Executive Director of CBRE Global Capital Markets tells The World Property Journal, "residential is a well understood asset class in Asia and we are seeing strong interest in US markets from China, Japan, and Hong Kong. The relative performance and availability of multifamily assets in the US compared to home markets is extremely attractive to investors.  This can be seen in the diversity and depth of the capital looking to allocate into multifamily.  Asian capital may not be making the biggest trades at this time, but there is solid interest, particularly in the lower lot sizes where private wealth can play."

Peter Donovan, Senior Managing Director of CBRE Multifamily also commented, "Asian investors are attracted to markets where fellow nationals are likely to live, and to US metropolitan areas that closely mirror the investment conditions found in major Asian cities such as Beijing or Hong Kong. This makes densely populated urban centers such as San Francisco, Los Angeles and New York obvious choices. Investors are also considering multifamily opportunities in markets such as Seattle, Salt Lake City, Jacksonville, Orlando and South Florida where the strategy is generally to target areas surrounding universities or other enclaves that attract a disproportionate number of Chinese nationals, whom developers believe can be enticed as potential tenants or investment buyers of condo units."

Cross-border buyers overall have targeted a range of multifamily assets in US locations since January 2013, with the majority of cross-border multifamily investment to date in 2014 being made in primary and secondary metros. This is in contrast to 2013 when secondary and tertiary metro acquisitions dominated the first eight months of the year. Cross-border investors have preferred purchasing newly built core and core-plus product in 2014, compared to a significantly greater focus on slightly older core-plus and value-add product in 2013. 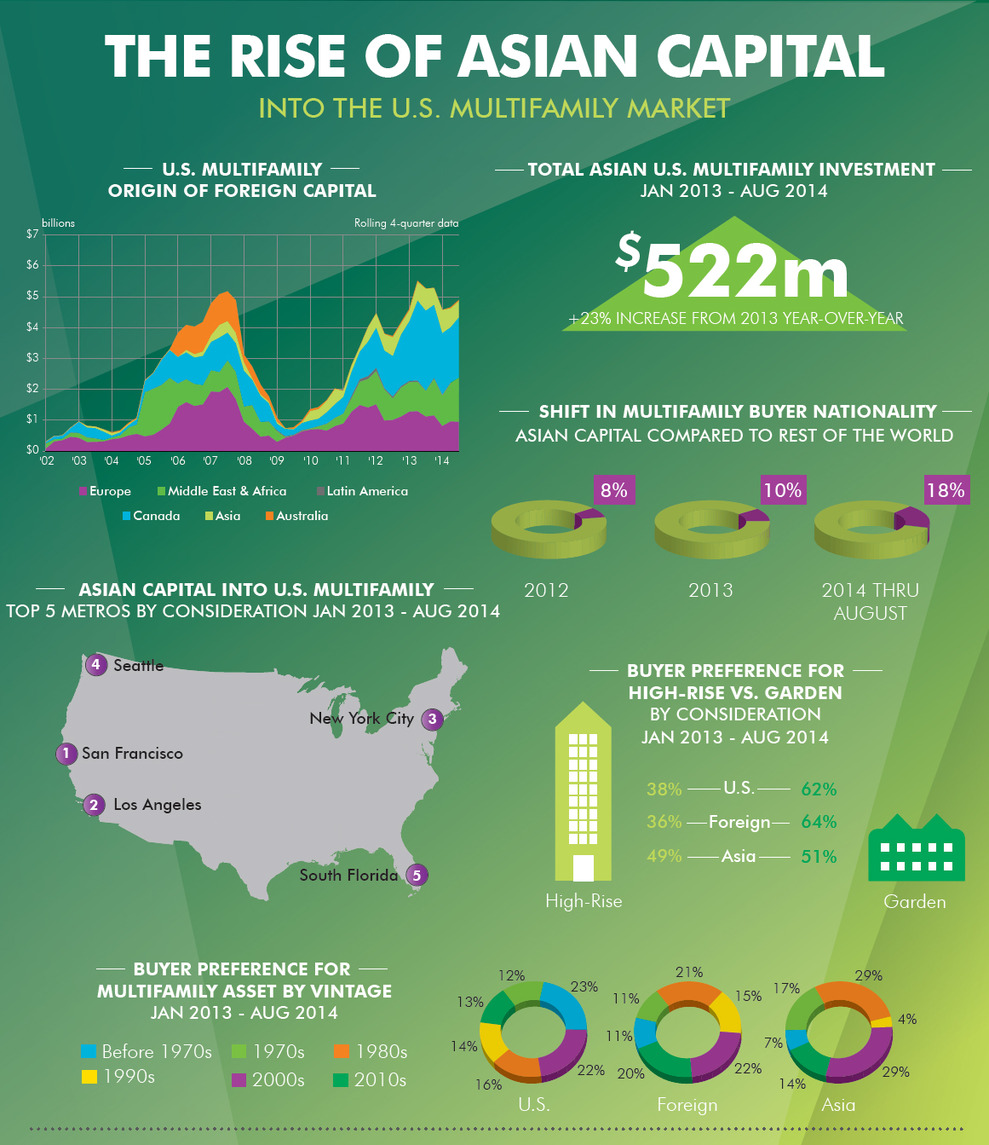