The percentage of home buyers who could afford to purchase a median-priced, existing single-family home in California in first-quarter 2016 rose to 34 percent from the 30 percent recorded in the fourth quarter of 2015 and was unchanged from first-quarter 2015, according to C.A.R.'s Traditional Housing Affordability Index (HAI).  This is the 12th consecutive quarter that the index has been below 40 percent and is near the mid-2008 low level of 29 percent.  California's housing affordability index hit a peak of 56 percent in the first quarter of 2012.

Home buyers needed to earn a minimum annual income of $92,571 to qualify for the purchase of a $465,280 statewide median-priced, existing single-family home in the first quarter of 2016.  The monthly payment, including taxes and insurance on a 30-year, fixed-rate loan, would be $2,314, assuming a 20 percent down payment and an effective composite interest rate of 4.01 percent.  The effective composite interest rate in fourth-quarter 2015 was 4.07 percent and 3.97 percent in the first quarter of 2015.

Condominiums and townhomes were also more affordable compared to the previous quarter. Forty-one percent of California households earned the minimum income to qualify for the purchase of a condominium or townhome in the first quarter of 2016, up from 39 percent from the last quarter of 2015. An annual income of $77,575 was required to make monthly payments of $1,939.

Key points from the first-quarter 2016 Housing Affordability report include: 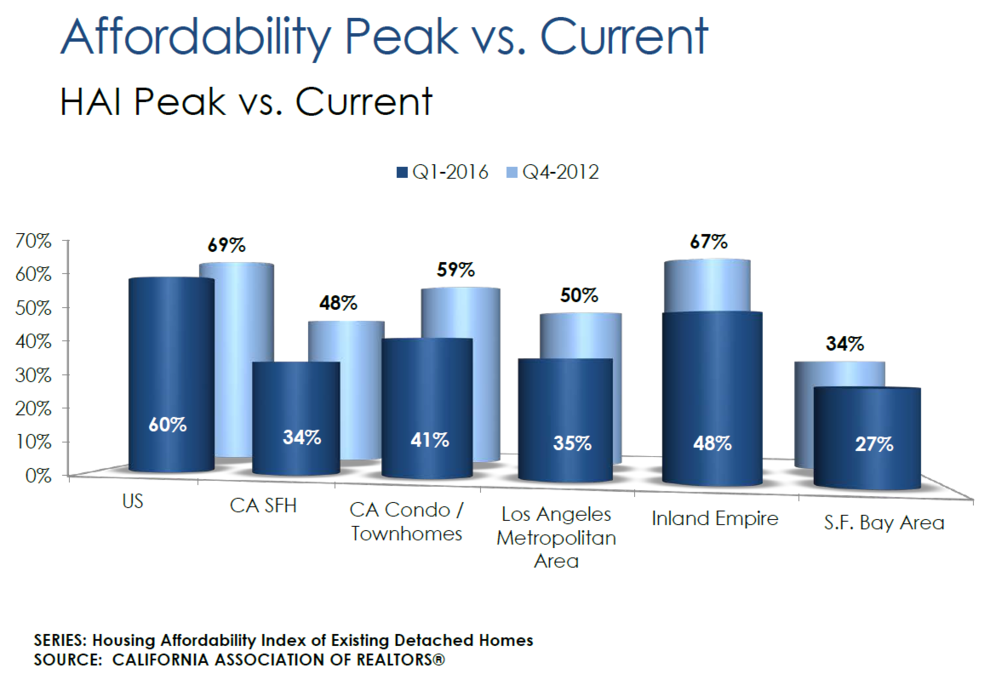