According to the California Association of Realtors, California home sales in January 2022 were down 8.3 percent year over year from January 2021, but up 3.4 percent from the prior month of December 2021.

Closed escrow sales of existing, single-family detached homes in California totaled a seasonally adjusted annualized rate of 444,540 in January, according to information collected by C.A.R. The statewide annualized sales figure represents what would be the total number of homes sold during 2022 if sales maintained the January pace throughout the year. It is adjusted to account for seasonal factors that typically influence home sales.

January's sales pace was up 3.4 percent on a monthly basis from 429,860 in December and was down 8.3 percent from a year ago, when 484,760 homes were sold on an annualized basis. The year-over-year sales decrease was the seventh straight decline and the smallest in six months.

"The buoyant housing market continues in 2022 as buyers returned from the holiday season to take advantage of the still favorable lending environment before interest rates climb further," said C.A.R. President Otto Catrina. "With prices leveling off, housing supply showing a slight improvement and competition easing during the off season, buyers who missed the opportunity to buy were eager to get back to the market at the start of the new year."

California home prices continued to decelerate as a shift in the mix of sales toward less expensive homes and seasonal slowdown continued. The statewide median price declined to $765,580 in January, down 3.9 percent from December's $796,580 and was up 9.4 percent from the $699,920 recorded in January 2021. While January marked the first time since July 2020 that the state did not record a double-digit annual gain in its median price, the statewide median price is expected to edge higher as the market moves into the spring home buying season in the next few months.

"It's encouraging to see the market momentum from the last two years being carried forward into 2022 and the economy continuing to recover. January's sales remained above pre-pandemic levels, and new purchase mortgage applications are still registering strong numbers," said C.A.R. Vice President and Chief Economist Jordan Levine. "However, a surge in interest rates in the past few weeks is concerning and will likely create affordability headwinds for buyers, which may result in housing demand being curtailed in the upcoming months."

Other key points from C.A.R.'s January 2022 resale housing report include: 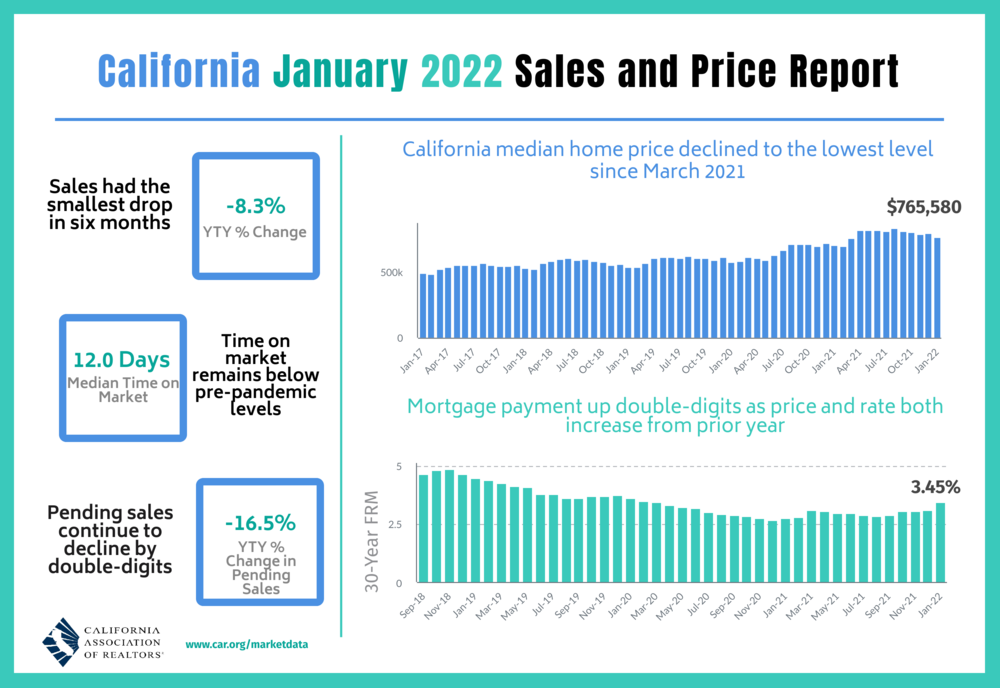