Half of US Property Investors Increase Commercial Acquisitions in 2015


Based on CBRE's newly published North America Investor Intentions Survey 2015, half of all real estate investors in North America intend to increase their property acquisitions in 2015, with San Francisco the number one target for the second year in a row.


The survey results reveal a clear picture of the current confidence and enthusiasm of commercial real estate investors in North America. Half of survey respondents said that they expect their purchasing activity to increase in 2015. Among this group, approximately one-third plans to raise their investment volumes by 20% or more.

The most compelling targets for investors in 2015 include most core markets--San Francisco, New York, Los Angeles, Seattle, Washington and Chicago. The high growth Texas metros of Dallas and Austin were also considered attractive for investment. Rounding out the top metros list are four metros currently enjoying robust economic growth: Charlotte, Atlanta, Miami and Nashville. Unsurprisingly, Houston dropped out of the top 10 list due to the challenges it faces with lower oil prices. 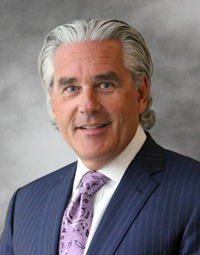 "The strength of the economy creating real estate demand, improved property fundamentals and measured supply gains make North America extremely attractive, with investors maintaining a hungry appetite for real estate assets. As was the case in 2014, a majority of investors intend to increase their property acquisitions in 2015. A natural consequence of this appetite for real estate assets is the competitive investment environment," said Chris Ludeman, Global President, CBRE Capital Markets.

"Prices may be high in San Francisco, but the dynamic economy and tight property market conditions remain extraordinarily compelling for investors. New York remains near the top of investor targets and will always be a compelling option. And while investors sometimes hesitate over Texas, Dallas/Fort Worth's sustained economic and demographic growth is very hard to ignore--131,000 new residents in 2014 alone and 132,000 new jobs in the year ending February 2015."

Concern about weakness in the global economy was ranked by investors as the greatest threat to property markets in North America. Even if the U.S. economy is managing to expand despite a sluggish global economic environment, 29% of respondents are very concerned this year vs. 10% in 2014. The second highest response--the perception that real estate has become overpriced--indicates that investors not only see challenges to themselves from the competitive investment landscape, but challenges to the industry. In 2015, 27% selected "overpriced real estate" as the greatest threat to property markets vs. 20% last year.

The majority of investors are willing to move out the risk curve (or feel that they must) in 2015, and are looking beyond core/good secondary for investment options to obtain yield. Over 50% of survey respondents selected value-add as the most attractive asset strategy. Another 13% selected opportunistic for a combined 66%, well ahead of last year's 57%.

Investors remain interested primarily in industrial, office and multifamily product, with industrial leading the charge. Industrial is the preferred property type for investors in 2015, with one-third of survey respondents selecting either of the two industrial categories as their preferred sector. Industrial was also first in 2014 at about the same response rate. Office comes in second highest with 25% of the vote, down just slightly from 2014. Among niche property types, senior housing and healthcare are becoming increasingly appealing. 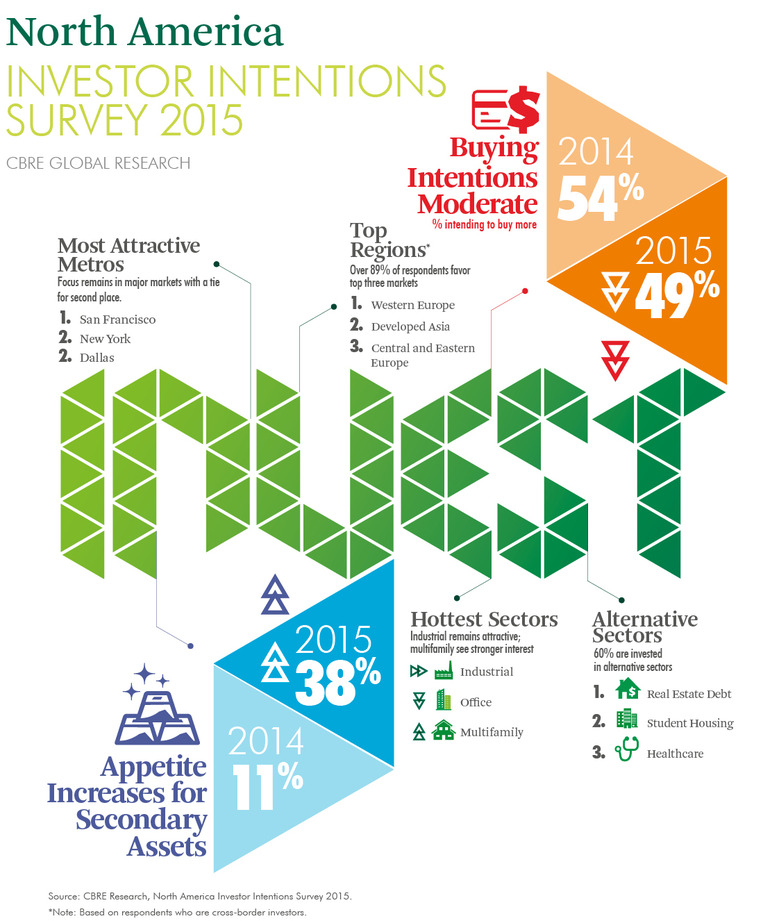