According to the S&P/Case-Shiller Home Price Indices for July 2015, U.S. home prices continued their rise across the country over the last 12 months.

The S&P/Case-Shiller U.S. National Home Price Index, covering all nine U.S. census divisions, recorded a slightly higher year-over-year gain with a 4.7% annual increase in July 2015 versus a 4.5% increase in June 2015. The 10-City Composite was virtually unchanged from last month, rising 4.5% year-over-year. The 20-City Composite had higher year-over-year gains, with an increase of 5.0%. San Francisco, Denver and Dallas reported the highest year-over-year gains among the 20 cities with price increases of 10.4%, 10.3%, and 8.7%, respectively. Fourteen cities reported greater price increases in the year ending July 2015 over the year ending June 2015.

San Francisco and Denver are the only cities with a double digit increase, and Phoenix had the longest streak of year-over-year increases. Phoenix reported an increase of 4.6% in July 2015, the eighth consecutive year over-year increase. Boston posted a 4.3% annual increase, up from 3.2% in June 2015; this is the biggest jump in year-over year gains this month. 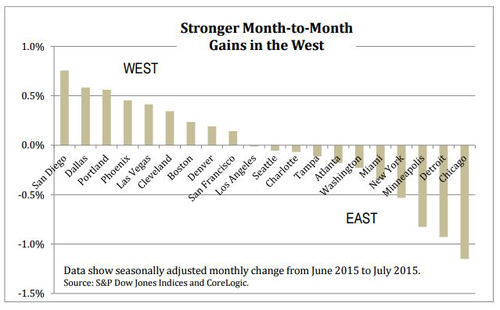 "The S&P/Case Shiller National Home Price Index has risen at a 4% or higher annual rate since September 2012, well ahead of inflation. Most of the strength is focused on states west of the Mississippi. The three cities with the largest cumulative price increases since January 2000 are all in California: Los Angeles (138%), San Francisco (116%) and San Diego (115%). The two smallest gains since January 2000 are Detroit (3%) and Cleveland (10%). The Sunbelt cities - Miami, Tampa, Phoenix and Las Vegas - which were the poster children of the housing boom have yet to make new all-time highs.

"The economy grew at a 3.9% real annual rate in the second quarter of 2015 with housing making a major contribution. Residential investment grew at annual real rates of 9-10% in the last three quarters (2014:4th quarter, 2015:1st-2 nd quarters), far faster than total GDP.

Further, expenditures on furniture and household equipment, a sector that depends on home sales and housing construction, also surpassed total GDP growth rates. Other positive indicators of current and expected future housing activity include gains in sales of new and existing housing and the National Association of Home Builders sentiment index. An interest rate increase by the Federal Reserve, now expected in December by many analysts, is not likely to derail the strong housing performance."