According to a new report by Redfin, sales of U.S. luxury homes of $1 million and more continued to outpace the rest of the housing market in Q3, 2014. Luxury sales increased by 9 percent while total market declined 1.2 percent from the same time last year.

The luxury housing segment was the first to recover after the crisis, and has been going strong ever since, benefiting from a booming stock market, low interest rates and overseas investment.

But that overseas investment is beginning to wane, and markets that are most dependent on international demand are seeing a steady and dramatic decline in sales of million-dollar-plus homes. Meanwhile sales of expensive homes continue to rise at a steady pace in cities where those sales rely less on investors, both foreign and domestic. 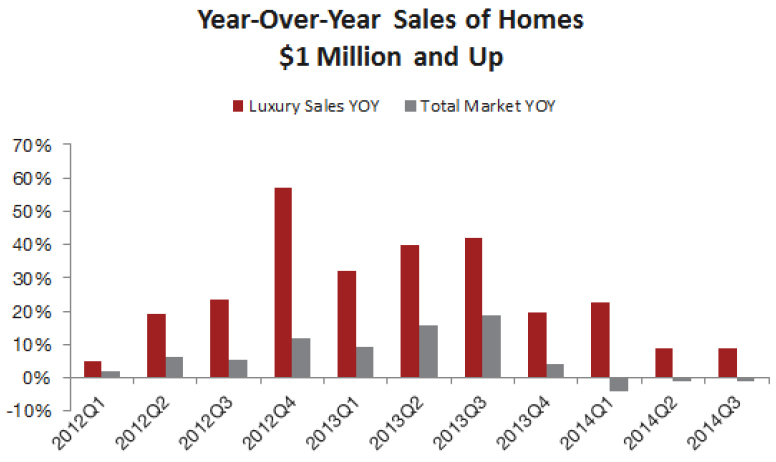 A million dollars will still buy what's considered a luxury home in most parts of the country, but there are of course places where this price point will buy nothing more than the average home. As expected, several pricey California cities were at the top of the list for million-dollar-home sales in the third quarter: San Francisco (No. 1), Los Angeles (No. 2), San Jose (No. 3) and San Diego (No. 5). But a couple of cities that are considered affordable also made the list: Chicago (No. 4) and Houston (No. 6). Both cities beat out Seattle, Boston and Washington, DC, which have higher housing costs in general.

Houston was a clear standout, with a 42 percent increase in sales of homes costing $1 million or more since last year; the average increase for the 385 cities that had million-dollar-home sales in the third quarter was 17 percent. The big surge in million dollar-plus homes in Houston was driven by a shift in homebuyer demand toward luxury properties.

"The luxury home market in Houston is thriving in large part because of the strong and diverse job market," said Redfin agent Tara Waggoner. "Energy and technology companies like Exxon Mobil are hiring employees away from the coasts. Those people are shocked at how much home they can get for $1 million in Houston. The Heights area is popular for its 1920s to 1950s inspired bungalows and its protected historical district. In other popular neighborhoods, like The Woodlands, the job market is causing a bit of a cultural shift, too. People are starting to forgo the Houston nightlife and opt to stay home, simply because they now have the space to entertain. "

Houston's locally driven luxury market stands in contrast to cities where there has traditionally been a lot of international investor interest in high-end real estate. We took a look at seven markets that have heavy international buyer activity: Los Angeles, Orange County and Riverside-San Bernardino in California; Miami, Orlando and Fort Lauderdale in Florida; and Las Vegas.

Though home sales for $1 million and more in these markets remain strong, year-over-year growth has plummeted in the past year, going from 46 percent to just 5 percent. And as international investor interest in high-end properties wanes, interest rates are expected to rise, making these expensive homes even more costly. Supply of million-dollar-plus homes dropped by 13 percent in the third quarter compared with last year. Tight inventory means that any post-crisis deals in high-end real estate have all but disappeared. 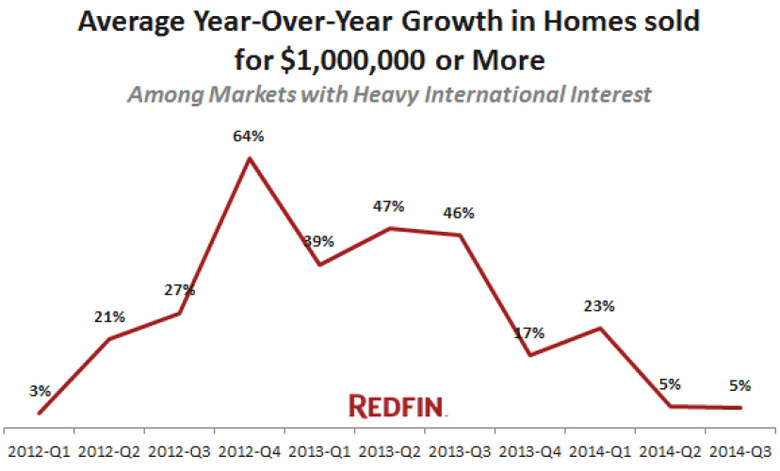 There has also been a precipitous drop in all-cash buyers: About half of all transactions in the seven markets with heavy international investor interest were cash at the start of the year, but that fell to 22 percent by the third quarter. 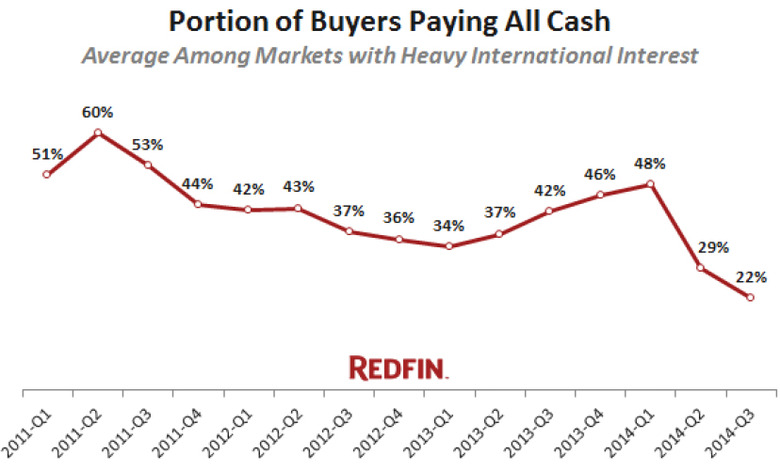 Again, this is showing up the most in Southern California but less so in Florida, which is interesting because Miami is more broadly international while the West Coast markets see heavier interest from Asian buyers.

Million-dollar-home sales will continue to be strong for the remainder of 2014 and into next year, but those sales, at just under 3 percent of the market, will have a limited impact on overall sales growth in 2015. This sector of the market, particularly in the places that have typically had strong foreign interest, will need traditional (and well-heeled) buyers to offset disappearing demand from international investors.