California Home Sales, Median Price to Increase in 2018, But at Slower Pace


According to the California Association of Realtor's 2018 California Housing Market Forecast, with the economy expected to continue growing, housing demand should remain strong and incrementally boost California's housing market in 2018, though a shortage of available homes for sale and affordability constraints will be a challenge.

"Solid job growth and favorable interest rates will drive a strong demand for housing next year," said C.A.R. President Geoff McIntosh. "However, a persistent shortage of homes for sale and increasing home prices will dictate the market as housing affordability diminishes for buyers struggling to get into the market."

"This year's housing market can be told as a tale of two markets - the inventory constrained lower end and the upper end that's non-inventory constrained," said C.A.R. Senior Vice President and Chief Economist Leslie Appleton-Young. "This trend is likely to continue into 2018 as active listings have declined across all price ranges for the past two years, but is most obvious at the lower end."

"With tight inventory being the new 'norm' for the past few years and at least the upcoming year, we'll continue to see fierce competition driving up prices, leading to lower affordability and weaker sales growth." 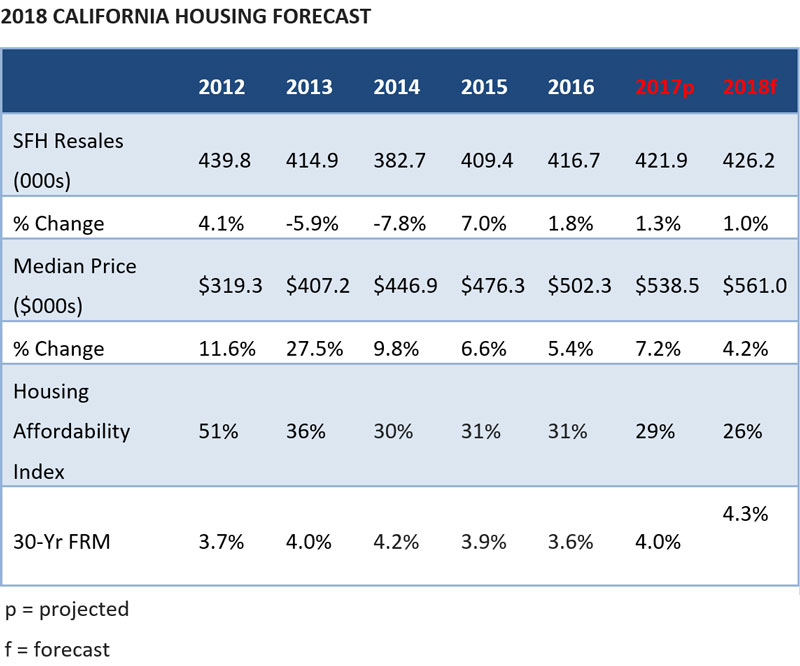