California Realtors are reporting this week that closed escrow sales of existing, single-family detached homes in California totaled a seasonally adjusted annualized rate of 434,170 in October, 2021.

The statewide annualized sales figure represents what would be the total number of homes sold during 2021 if sales maintained the October pace throughout the year. It is adjusted to account for seasonal factors that typically influence home sales.

October's sales pace dipped 0.9 percent on a monthly basis from 438,190 in September and was down 10.4 percent from a year ago, when 484,510 homes were sold on an annualized basis. Despite the fourth straight year-over-year sales decrease, statewide home sales maintained a 13.4 percent increase on a year-to-date basis.

"As the housing market moves from 'frenzied' to 'less frenzied' and price growth comes back to earth, fewer homes are selling above asking price and bidding wars are less prevalent, so more buyers who pushed pause earlier this year will be able to take advantage of still-cheap financing," said 2022 C.A.R. President Otto Catrina. "With their median price being 30 percent less than that of a single-family home, condominiums and townhomes have been selling particularly well as they are a more affordable option to buyers with a smaller budget."

California home prices continued to level off as the market moved further into the off-season, dipping below the $800,000 benchmark for the first time in seven months. At $798,440 in October, the statewide median price was down 1.3 percent from September's $808,890 and was up 12.3 percent from the $711,300 recorded in October 2020. The month-to-month price decline was the second in a row, and the price drop from September was on par with the long run average of -1.5 percent recorded between September and October in the past 42 years.

"Despite a slowdown in sales from last year's robust fall season, the California housing market continues to stabilize and is outperforming the pre-pandemic levels observed in 2017, 2018, and 2019," C.A.R. Vice President and Chief Economist Jordan Levine said. "Slower sales activity suggests that the market is returning to its typical seasonal pattern and further market normalization can be expected in the upcoming months. While the market is showing signs of cooling off in recent months, 2021 continues to outpace last year's sale level so far and is expected to post a gain at year-end." 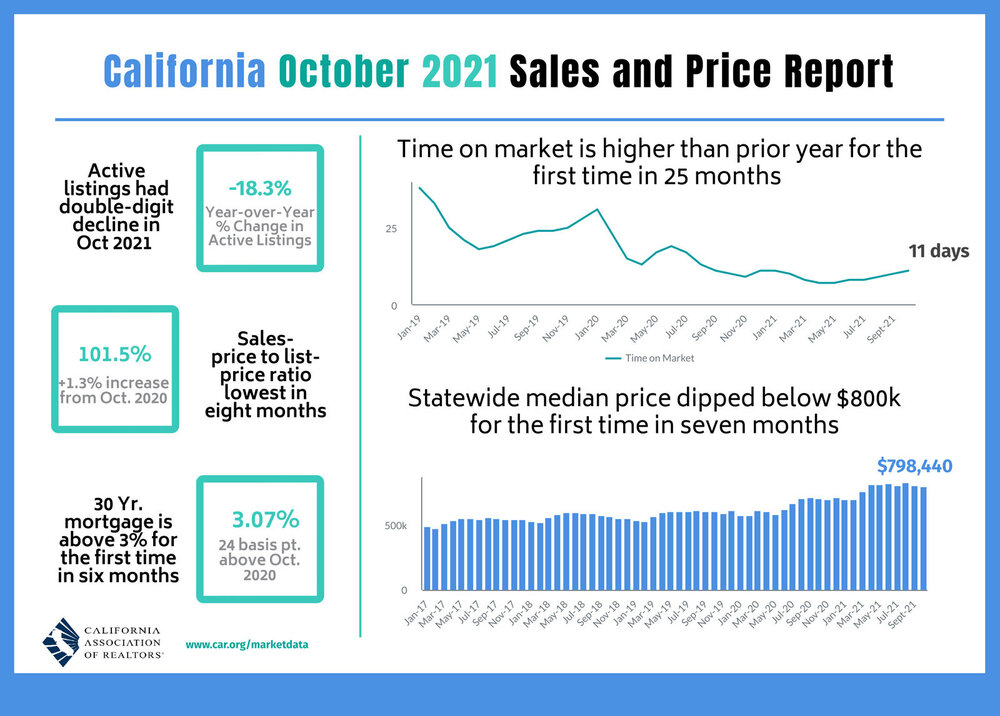